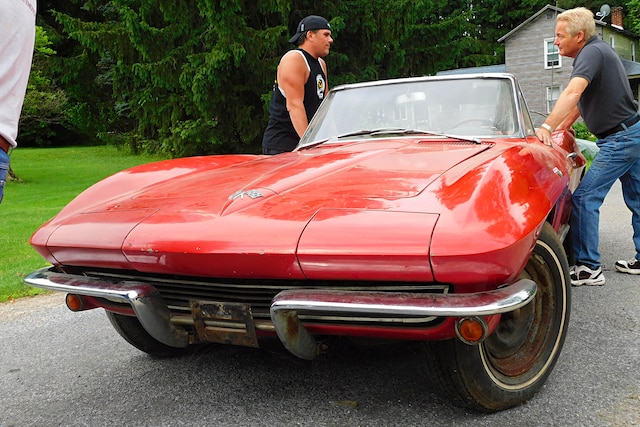 Matt Barczak was excited about buying a heavily optioned ’65 Corvette convertible with a 350-horse 327 (L79) and four-speed. He had no idea there was a celebrity owner from this car’s past. Barczak lives in Johnstown, Pennsylvania, where he is well known for restoring cars, with help from his father, Pete, and friend Frank Arone of Arone Restoration in Homer, Pennsylvania. George, a friend that works with Matt at the volunteer fire department, told him about a ’65 Corvette in the area that might be for sale.

Barczak recalls looking at this ’65 on the “day the Steelers lost in the playoffs to the Jaguars,” January 14, 2018. The score was 45-42, a real heartbreaker. The same could be said about the how the Corvette was shaping up to be. Number one, a neighbor had first dibs. Number two, the owner, Joe, was iffy about selling.

Best described as “buried in dust,” the ’65 had been parked for the last 20 years in an attached two-car garage, where it was “stuffed in the corner between a furnace and a dog pen.”

Finally, Matt got tired of waiting and in May 2018 asked Joe to make a decision, yes or no. A week later Joe agreed to sell the ’65 and Barczak picked up the car on June 8.

“I didn’t really pay attention to the name on the Protect-O-Plate. I just knew it [the plate] was there, which is always a bonus,” Barczak said.

“B Skelton” is reverse stamped into the Protect-O-Plate.

Barczak will buff out the Rally Red paint, which is original.

Once home and calmed down, Barczak read “B Skelton” reverse-stamped into the Protect-O-Plate and thought the name sounded familiar, but couldn’t pinpoint why.

Then, the light came on. “B Skelton” had to be Betty Skelton, a legendary Corvette driver in the 1950s and 1960s. Skelton set speed records in planes and automobiles before joining Campbell-Ewald, GM’s ad agency, in 1956. Inducted into the Corvette Hall of Fame in 2001, Skelton helped launch Corvette News, and served as editor. In 1956, Bill Mitchell designed for Betty a Corvette that she drove to Speed Weeks, which she also used to pace NASCAR races in 1957.

Barczak realized Betty Skelton is a huge name in Corvettes and racing. The presence of her name on the Protect-O-Plate made this ’65 special. Discussing the car with several NCRS Corvette historians, Barczak heard a famous name, Joe Pike. Founder and first editor of Corvette News, Pike also set up the NCCC (National Council of Corvette Clubs). Anybody who read Corvette magazines back in the day knew of Joe Pike. He was Mr. Corvette Promotion, pure and simple. The NCRS shipping report confirms this car was a Zone 00, Dealer 500, confirming a “brass hat” car for Skelton ordered by Pike.

Presently, Barczak is looking into the car’s advertising background. He believes Chevrolet used two Rally Red ’65 Corvettes for advertising, “one with a red gut, and one with a black gut.”

This makes sense because at the time Skelton was working for GM’s advertising agency. This ’65 convertible was built on December 4, 164 and went to Chevrolet Central Office on December 21, 1964. About five months later, on May 12, 1965, Skelton received her new Corvette, apparently when GM no longer needed the car for advertising.

This old magazine ad pictures what is most likely the ’65 Corvette Barczak found in the two-car garage near Johnstown, Pennsylvania.

The 327 engine is option code L79, complete and numbers-matching.

The bucket seats are covered in black vinyl.

Michigan plates that came with the car date to 1979.