This 1959 Corvette is the ultimate expression of restomoding: style, class, luxury and performance 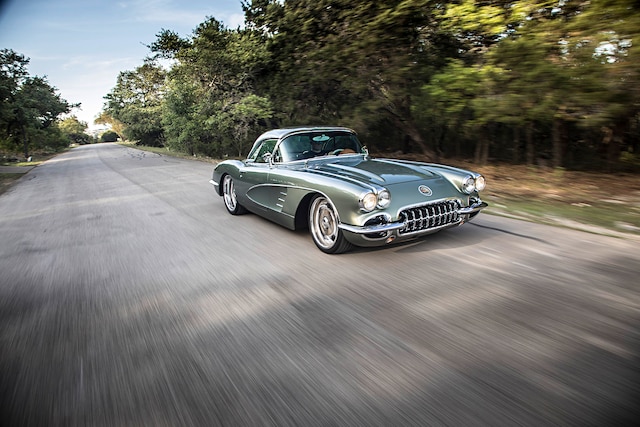 Most of the time when we present you with a Corvette feature, the story is a rags-to-riches scenario where a guy or gal waited years before their dream car become a reality. It’s a deeply touching story that most can relate to or, at the very least, aspire to. This isn’t that story. Paul Wolf already went through the whole process of attaining his dream Corvette. To read about that, you can dig through the vetteweb.com archives and find his restomod ’64 Corvette built by RPL Customs that we featured back in 2014. This time around it’s a different story. He got a taste of perfection and now he’s back for round two.

This journey’s origins began back when Wolf and his wife, Sheryl, were just starting a family. He had a ’59 Corvette at the time and was right in the middle of doing a restoration on it when they got pregnant. He regretfully had to sell the Corvette as a pile of parts to help fund the new chapter in his life. It wasn’t until 25 years later that he finally got the chance to make good on that old project. After experiencing his C2 that RPL built for him, Wolf got an idea: why not have ’em build his second dream car: a restomod ’59 Corvette?

From there he started the search for a ’59 Vette and ended up finding one for sale on eBay in a condition not unlike that of his first C1. It was someone else’s stalled project that was completely disassembled and stripped for paint. After bringing it home and getting to know the car for a couple of months, Wolf called up Roger Lynskey, owner and builder at RPL Customs in Royse City, Texas, and a plan was set for the Vette. It would incorporate modern performance capabilities and as much technology as possible, along with copious amounts of luxury in the form of climate control, Bluetooth and leather all within the classic envelope of the C1.

Lynskey began where the previous owner left off, by getting the Corvette ready for a fresh coat of paint. Even though they planned to put some serious tire under the Vette, Wolf wanted the car to retain the original body. That meant no fender flares or widening of the quarter-panels. Instead, Lynskey took the time to tub the rear wheelwells. When it came to picking a paint color, Wolf and Lynskey were not on the same page—at least not at first. Lynskey suggested green and Wolf said no way. In his mind, he pictured something brash and obnoxious, but the specific green Lynskey had in mind was Silver Green Effect. Wolf eventually conceded and the car was sent over to Brian Vastine of Vastine’s Paint Garage in Royse City, Texas, where it received the final bodywork before being sprayed in the custom green paint from Standox. Instead of painting the coves silver or white, or something more traditional, Wolf’s Vette got the same Silver Green Effect in the coves, except in a matte finish.

Not to get too far ahead of ourselves, but when the car was completed, Wolf told us the color was by far his favorite aspect of the car, saying “The color is the bomb. The first question that comes out of everyone’s mouth is ‘What color is that car?!’”

Moving on with the build, the body headed back to RPL Customs and received a warm welcome in the form of a brand-new Art Morrison GT Sport chassis. Included with the chassis are a set of 2-inch drop spindles and six-piston, 14-inch disc brakes from Wilwood up front along with Strange Engineering adjustable coilovers. The rear also gets coilovers from Strange and Wilwood four-piston, 14-inch disc brakes on either end of a Ford 9-inch. RPL Customs then upgraded the 9-inch with a Strange S-Series centersection that houses 3.70:1 gears and a limited-slip.

Once the body was bolted on the new Art Morrison chassis, they installed Wolf’s second favorite aspect of the car: the wheels. He chose a set of Schott Accelerators with 19x8s in the front and 20x10s in the rear, which would never fit under the stock bodywork if it weren’t for the tubs. On the wheels went 245/35R19 and 295/30R20 Michelin Pilot Sport 4S tires to help the Vette make the most of its modern chassis.

For power, RPL picked up a stock LS3 crate engine from Chevrolet Performance and after installing a set of Art Morrison headers, they sent the engine over to be dyno’d at Henderson Performance Technologies in New Braunfels, Texas. With the addition of those headers and some tuning, the engine made an impressive 487 horsepower compared the stock, advertised 430 hp. Back at RPL, the LS3 was mated with a 4L65E automatic transmission and then dropped into the Vette. A Vintage Air Front Runner accessory drive system with their A/C compressor and 170-amp alternator is attached to the front of the LS, while an AutoRad aluminum radiator does the cooling. The engine was dressed up further with custom valve covers and an engine cover from Greening Auto Company. Then to finish things up, RPL fabricated a custom exhaust system from the headers back to a dual inlet and outlet MagnaFlow muffler. The trick part of the system is that the exhaust exits directly through the stock bumper outlets.

Inside, the modern tech keeps on going. RPL Customs swathed just about everything in curry-colored Ultraleather, such as the dashpad, seats and door panels. A Billet Specialties steering wheel was installed on an ididit steering column and then also wrapped in the curry Ultraleather. Then the center console and gauge cluster were sprayed in matte curry paint to match. The factory gauges were replaced by Dakota Digital VHX units mounted in the stock locations and a Bluetooth-controlled Kicker head unit was hidden in the trunk, sending the tunes out to the 6 3/4-inch Infinity speakers. Other modern features worked into Wolf’s Corvette include power windows and door locks as well as pushbutton start and RainGear electric windshield wipers. Finally, to keep Wolf cool in that brutal Texas heat, new glass from Auto City Classics was installed and tinted, then in went a complete Vintage Air climate control system.

The whole build, from start to finish, took about 4 1/2 years because the payment plan Wolf worked out with Lynskey was a pay-as-you-go type of plan. Wolf would fork over some dough then Lynskey would work on the Vette for a week or two before moving on to other customers’ projects for a few weeks. “It got a little frustrating because it was a long time,” said Wolf, “but it was worth the wait.” Over the past year or so since he got the ’59 back, Wolf has driven it over 1,400 miles attending local cruises, going on weekend drives and taking his wife out for dinner.

So now that dream car number two is in the garage for Wolf, what’s next? Number three? Well yes, actually. As we write this feature he is on the hunt for a C3 Vette to complete his ideal garage. And while a restomoded C3 might still be a few years out for Wolf, at least we know he won’t be bored waiting. Vette

Scratching a 30-Year Itch With a 1959 Chevrolet Corvette

After a 30-year itch, David Fuller finally got the 1959 Chevrolet Corvette of his dreams. And then some.