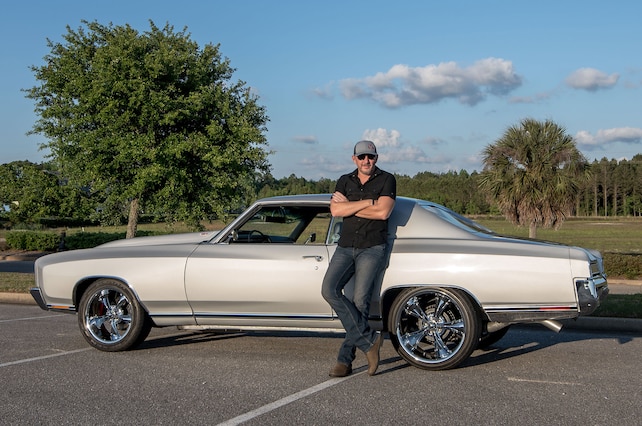 Tommy Rorex of Daphne, Alabama, has been a Monte Carlo fan from the beginning. At 16, he got a ’71 Monte with a BBC 402 and TH400. Now, 30 years later Tommy has another first-gen Monte, this one a ’70 SS model. When he bought it, it already had the paint done and was running the 454/TH400/12-bolt (4.11 gears) combo he was after. In the four months since the acquisition, Tommy has rebuilt the front suspension with tubular A-arms and urethane bushings, added a Holley Sniper EFI kit along with an E3 ignition system to the engine, and incorporated Dakota Digital gauges and a RetroSound stereo into the dash, among other upgrades.

As many of the readers of Super Chevy can attest to, project cars can sometimes take a long time to complete ... a very long time. It took Wayne Ligon 24 years to complete his ’79 Chevrolet El Camino, but we think it was worth the time it took. He purchased the Elco in 1994 and just recently finished up what he calls his “back burner project deluxe.” The only build chores Wayne farmed out was the engine machine work (a turned crank, pop-up pistons, and an Edelbrock cam) and a posi install into the rearend. Wayne did all other work: paint, interior, etc., himself.

The 1964 Corvette of Daniel Jones has a scant 68,000 miles on the odometer. But don’t think it’s a pampered, sunny Sunday show-only kind of car. Nope, this restomod has some serious beef under that big-block-style stinger hood. A 383 SBC with a ProCharger supercharger that makes about 12 psi gets things moving in hurry. To handle the power, there’s a heavy-duty differential with an oversized driveshaft and halfshafts. A TREMEC T-5 transmission is now in charge of gear duties. The chassis has been upgraded with QA1 adjustable coilovers and SSBC disc brakes on all four corners along with a Hydroboost unit. Daniel has drag radials for when he hits the dragstrip. Power steering and A/C make the driving experience very comfortable. The paint is a House of Kolor candy apple red over a silver base.

Check out these readers rides which features a 1966 Chevy Nova and a 1970 Chevy Monte Carlo, only at Chevy High Performance Magazine.

Check out this 1970 Chevy Monte Carlo submitted by one of our readers here at www.chevyhiperformance.com the exclusive website of Chevy High Performance Magazine!

This custom-built, LS3-powered 1977 Monte Carlo makes about 625 horsepower and is nothing like anything you’ve seen before.