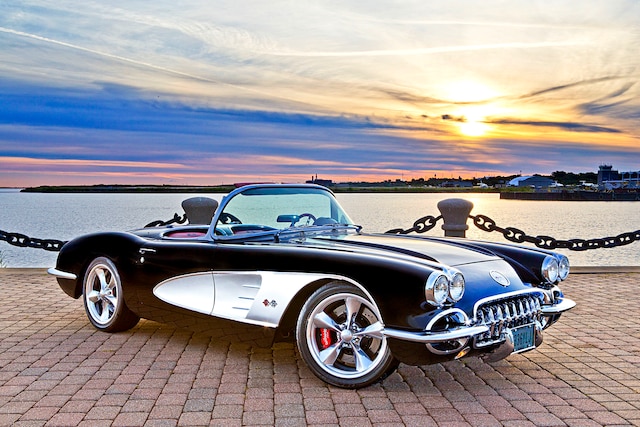 Caution! Reading the following feature about this restomoded ’60 Corvette in its entirety will greatly increase your propensity to experience a range of emotions, including—but not limited to—jealousy, longing, envy, joy, sorrow and/or the desire to spend copious amounts of time and money in attempts to replicate. Consider yourself forewarned.

Michael Suppo of Medina, Ohio, is a Corvette guy through and through, owning multiple examples over the years. In recent times, he got his hands on a couple cream-of-the-crop ’67s that most would die, for but what he really wanted was a C1. More specifically, he loved the styling of the ’59 and ’60 model years and, being that he was born in 1960, that narrowed it down even more. “I’ve always been looking for a ’60,” Suppo told us, but didn’t start searching seriously for one until the early 2000s. “I searched four years for it,” he said. He obviously wasn’t in the mood to settle for anything less than the perfect car.

Finally, a friend of his heard about a ’60 Corvette that had been recently restored and restomoded, but was deeply lacking in the style department. “It wasn’t finished properly as far as I was concerned,” Suppo stated bluntly. The main problems were an ugly set of wheels and a ride height that could compete with a midsize pickup truck. At first, this turned him off, but then his friend encouraged him to take a deeper look. When he did, he realized the car had gobs of potential and was just a few tweaks away from being exactly what he wanted.

The paint—black with silver coves—was absolutely flawless, as was the red-leather interior. Underneath, it was hiding some goodies, too, including a complete Corvette Corrections chassis and a stout little 383 stoker paired with a ZF six-speed transmission. He was told that the owner had the car dyno’d and it put down 440 horsepower and 402 lb-ft of torque to the wheels. The current owner found the car while attending Corvettes at Carlisle in Pennsylvania. He had been looking all over the show for two whole days hoping to find a car to buy, but had no luck. Just as he was getting ready to leave, he heard someone fire up a few rows over—it was a ’60 Corvette that was for sale after having been parked in a barn for many years.

Fast forward a few years, and the guy had the car restored and modified with the above goodies. By the time Suppo got a hold of him, the current owner wasn’t even advertising the car for sale, but Suppo talked him into letting it go. Although it wasn’t as affordable as he’d been hoping for, most of the hard stuff was done.

After purchasing the car, Suppo decided not to bring it home just yet, but first have it fixed up by Mike Coletta in Orlando, Florida. He started by throwing on a new set of wheels and tires. Suppo chose to go with 18x8 Boyd Codington Junkyard Dog wheels wrapped in 245/40ZR18 Falken Ziex ZE912 tires. Once the wheels and tires were mounted, Coletta adjusted the coilovers on the Corvette Corrections chassis to bring the ride height down a few inches. Finally, he upgraded Suppo’s car with an 800-watt, iPod/iPhone-controlled sound system before he loaded it on a trailer headed back to Medina, Ohio.

“When it came off the trailer, I knew I’d never sell it,” said Suppo. “This car will stay with me until I’m all done.”

For the next few years, he simply enjoyed driving the car. “It’s the most reliable Corvette I’ve ever driven. I could get in it and drive it to California no problem,” Suppo proudly exclaimed. But then, about four years ago, he decided it was time to freshen some things up with the Corvette. He had the car sent over to Corvette Conspiracy in Cleveland for some upgrades, the biggest of which was the addition of an Inglese Eight Stack EFI unit. Not only did this make the 383 really pop in the engine bay, but it made the Corvette that much more reliable. At the same time, the guys at Corvette Conspiracy bolted on a set of ceramic-coated Hooker long-tube headers and a March Performance serpentine system.

To go along with the new performance upgrades, they also modernized the car’s stopping ability by fitting it with a set of Wilwood disc brakes. In the front went six-piston calipers while the rear got four-pot units paired with 14-inch drilled and slotted discs all around. Last but not least, Corvette Conspiracy added a little refinement to Suppo’s driving experience by pulling out the interior and covering everything in Dynamat before putting it all back together.

The car was reliable before, but it only got that much more reliable and made it that much more of a joy to drive once the guys at Corvette Conspiracy were done with it. “I sit the car all winter,” says Suppo, “then turn the key and within two seconds the car is fired up and idling.” There’s really not much more you can ask of a car originally built in 1960. The style, the performance, the reliability—it’s all there. Jealous yet? Vette