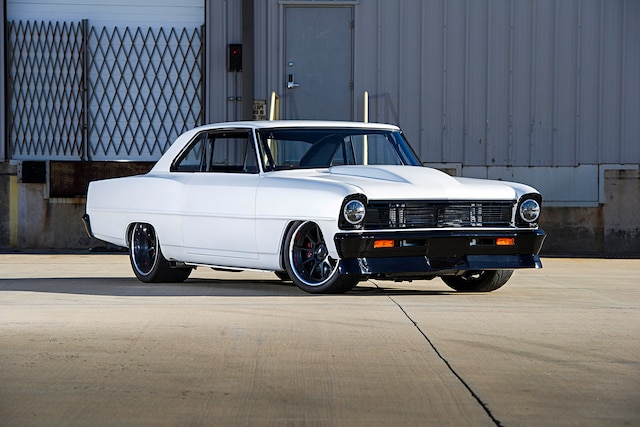 In central Oklahoma at least, the Goad surname is a storied one. Brother James (owner of the Reaper ’69 Camaro on Street Outlaws) is a street racer of no small legend. Chris Goad is a fabricator and chassis builder whose work is sought after. Gerald Goad owns Superior Concepts, a purveyor of “accessories” mostly for high-end imports. He’s developed a clear protective wrap for the noses of these popular motors that is virtually invisible—in some circles it might even be called a brassiere. Superior supplies further enhancement, window tint that the cops won’t argue with.

Gerald had the Nova shell that he’d gotten from Brent Austin, owner/driver of the Megalodon ’69 Camaro, also a big player on Street Outlaws and tight with brother James. Brent’s ’66 Nova became the apple of Gerald’s eye. Brent had replaced most of the sheetmetal and had mini-tubbed it, and it had an interior, but the car had no rear suspension at all … a perfect altar to perform slicing and dicing.

At the time, Chris Goad was backed up with work and assisting with the Reaper and Gerald didn’t want to impose, but after the car had visited several other chassis shops, a calamity of errors as well as a minor blaze from careless welding, Chris got the job. In the interest of rigidity and torsional stiffness, he built a perimeter frame for the unibody Nova from round chromoly stock. He finished the chassis with DSE front and rear suspension subassemblies. The goal was diversity, a piece that could possess utmost driveability, make tons of power, be road raced or raced in half-mile events, maintain air conditioning, stereo sound, and still have the appearance of a normal daily driver.

Gerald: “I already had a vision, which at some point everyone tried to talk me out of, to do a Satin White car with gloss-black trim. I wanted the car to be low, fast, functional, and clean. And I knew I didn’t want to deviate very far from the original gut, as I love the look of a classic interior in these cars—especially the center console. While all that sounds simple and well thought out, over the 2-year gestation we made many turns in the wrong direction. We built the entire engine compartment and floorpan twice. The center console I love? The first iteration put it up too high in relation to the seat.” To get shed of it, Chris had to lower the entire driveline and reskin the pan. And after the first fire, the windage tray needed amendment. “But the biggest sticking point was room—there wasn’t enough in the engine bay, it was like trying to stuff 10 pounds of shit in a 1-pound sack.”

To satisfy one of the bullet points, they brought in Travis Quillen to work with engine builder Troy Green on the 427 LSX that would blow a mighty 2,000 horsepower before it would be allowed to leave the dynamometer. Frankenstein Engine Dynamics digitally ported the cylinder heads. The block went to Katech Engineering to receive a squad of piston-cooling oil squirters beneath the crankshaft.

The fresh LSX was built around a brace of Precision Turbo 6870 Gen2 CEA billet snails. Jeff Lutz, who helped with the rear suspension, called Hogan’s Racing Manifolds for that work of art. Hogan’s crafted the billet intake tract and included an integral aftercooler. They embraced Holley Dominator engine management (boost, transmission, and traction control). To protect stuff from the heinous heat generated in the cramped, stifled engine bay, Dan Stark at DEI Thermo-Tec sent them everything they’d need to protect brake lines, hoses, master cylinder, as well as titanium wrap and the shields for the turbochargers.

“Knowing we had two of the smartest engine guys in the industry on the engine and Chris mocking the car for the new setup,” said Gerald, “we began thinking about an automatic overdrive transmission that could handle 2,000 horsepower.” ATI processed a 4L85E running a triple-disc converter with a 3,000-stall converter and a lockup feature. Jeff Lutz and Chris Goad liked the Moser M9 chromoly housing with Strange Engineering aluminum centersection and companion limited-slip differential and 35-spline axles. The brakes got big all around: 14.5-inch Baer plates touched by six-piston squeezers. Gerald’s beloved three-piece Forgeline hoops were swaddled with generous Toyo R888 rubber.

Gerald kept the sanctum unobtrusive and true to his heart’s desire. Erin Wickizer’s Broken Spring Auto Upholstery in Shawnee, Oklahoma, did the stock seats in vinyl, built the custom carpet set, and put the sound system to work.

In the matter of Gerald’s coveted finish and paint plan, he approached Rick Schmeski of Mountain Home Street Rods. Rick and his son Brett drove down from Arkansas to have a look at it. They liked it. Brett would be wafting the paint gun. After the Lamborghini Bianco Canopus paint episode, the Nova went to Travis Quillen for three weeks to eat about 1,000 feet of new spaghetti and, not coincidentally, for the initial engine tune-up.

So what now? “While we haven’t gotten aggressive with the timing or boost, with Travis Quillen on the keyboard, the LSX made more than 1,400 horsepower and nearly 1,300 lb-ft of grunt its first day on the rollers,” Gerald proclaimed. “And that was after driving an hour to the dyno and back and never having to touch the motor. With a little more tuning, Travis is confident of the 1,650-1,700-rear-wheel-horsepower goal.”

Now for the big question: Is the Nova wearing a bra or not? CHP