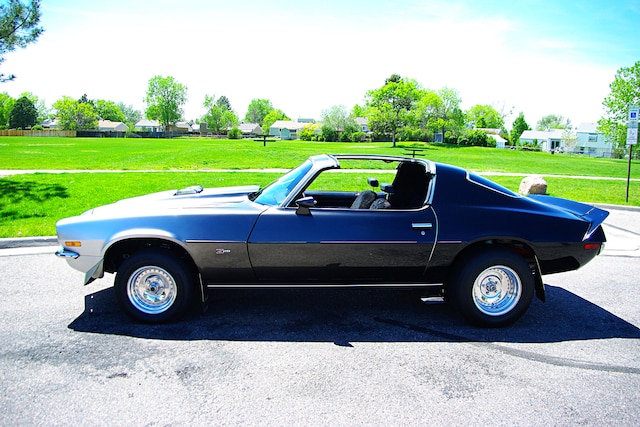 Hal Hansen, of Thornton, Colorado, did what many young men did when they returned home from Vietnam: he bought a car. In this case, a ’70 Camaro Z28. Hal has owned this Camaro for 47 years. The 383 stroker engine with a B&M 144 supercharger makes 525 horsepower. The four-speed trans and 12-bolt rearend with 4.10 gears are the original units. Other than a re-covered driver’s seat, the Camaro still sports its original Deluxe interior. The wheels are vintage 14- and 15-inch Center Lines. The cool progression paint scheme goes from silver, to charcoal, to black at the rear. The aftermarket T-tops, with glass panels, were added in 1978, with subframe connectors following soon after.

From 2014-’16, the ’69 Chevrolet Caprice Sport Sedan four-door hardtop of Mike Sumrell (Fayetteville, North Carolina) came away from the Rockingham Super Chevy Show with a class win in Big Car-Stock. For a fullsize Chevy it has surprisingly few options: AM radio and power steering. For power it has the original (rebuilt 0.010-over) 327 two-barrel engine and the original (rebuilt with mild shift kit) Turbo 350. Yeah, it’s a cruiser and that’s exactly how Mike uses it. Ensconced in the original Medium Green interior, the rebuilt-to-original-specs front suspension and non-power drum brakes handle the highways just fine. Hopefully, a future highway cruise takes him back to Rockingham on September 28-30, 2018, to see if he can grab a fourth class win. We certainly wouldn’t bet against him.

We’re not sure if returning Bowtie Keeper Jason Vendetto of Lake Ronkonkoma, New York, (Long Island) was speculating when he purchased this ’72 Chevelle SS for $7,000 in 1999, but we speculate it’s got a ton of equity today. Jason, along with his wife, Christina, and daughter Allison use the Chevelle to attend as many cruise nights and car shows as they can. Powering the Chevelle is a 402 big-block, Turbo 400 with 3,500-stall converter, and 12-bolt rearend. A 3-inch system with Flowmaster mufflers expels the spent fumes. The red-and-white color scheme flows into the interior with matching covers. The suspension is basically stock, with the obvious deviation being the Weld Pro Star wheels (15x6 front and 15x8 rear).