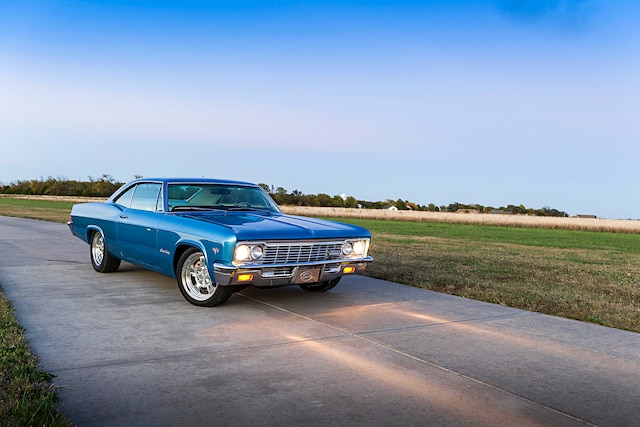 We’ve always held that the essence of hot rodding eclipses the gnashing of the mechanicals and the pride associated with a clean, spectacular rendition. A lot of the time it’s a family enterprise and is especially vibrant when the car has been simmering in the stew since it came out of the dealer’s nest and was passed on from father to brother to son.

The origin of this affliction is time-honored: son learns from father. “This car has been in my family since it was new,” said Steve Preister with a tinge of delight. “My dad purchased it in 1965 in Fremont, Nebraska. He and my mom drove it away from their wedding. They drove it every day until 1975. I went to car shows with them as a youngster. As an adult, my involvement was spurred by my friend Eric Sorenson.”

The thing was far from cherry. It had suffered some time living rough, naked, and ashamed before it found shelter. The elements had not been merciful. When Steve brought it into the light he cringed at the clots of rust and he saw hail damage and all the fractured glass. And a couple of times the stove went cold, went dark, and the Impala spent years passed out, wrapped in a tarp over in a gloomy corner.

Let’s go backward a minute; get a small sense of the Impala’s history. Steve’s uncle Virgil needed wheels and Steve’s dad cut a deal. He’d loan it to him with the stipulation that he’d give it back when he found his own wheels. About 12 months later he did and the car went right into grandpa’s shed and stayed there for 15 years. When Steve was 14 his dad thought his son should begin his first hot rodding hump with the heirloom Impala. This was 1990.

The hulk that Virgil pulled from the shed needed a little attention to get it running smart. Some used tires, a new battery, a fresh tank of gas, and a splash or two directly into the carburetor got it lit. Steve and his dad drove that thing for two hours. “I couldn’t believe it,” he croaked. “I thought this was the greatest thing ever. My dad and I cleaned it and fixed the brakes so I could drive it up and down the driveway and then through Ford dealer Bob Woodhouse’s lot next door to us. I could drive around without getting out on the road and without getting caught by the cops.”

Then he suffered a touch of temporary insanity—and bought an RX-7. The infatuation was fleeting. Soon, Steve zoomed in the opposite direction, seriously deluded by a ’32 Ford highboy. Then he got his senses back. Seriously, there was no room for a kid seat in there at all. End of story. In November 1998, his pop put the Impala on a trailer in Blair, Nebraska, and headed out for Steve in Wichita, Kansas.

“We pulled the plugs and squirted oil in the cylinders but it wouldn’t turn over fast enough to start.” So, of course, he and the guy who’d stay with him until the end, his pal Eric Sorenson, went to dinner to discuss battle strategy. Eric helped with another splash of gas, new plugs, and vibrant battery and that baby fired right up again! They drove it around the block then into the shelter to begin the long haul. The table of contents would include preserving original appearance, a bit of modern technology, and, of course, more power.

They separated the body from the ’rails and put it on a rotisserie so they could twirl it at will. The frame was sandblasted and powdercoated. There was enough strife in the interim to deem the Imp an official project car. Along with Eric’s car-building talent, Steve’s project was emboldened by paint and body buddy Bob Stapleton, a bona fide godsend after Steve’s unsavory experience with the original metal shop (he didn’t elaborate but the situation so frustrated him that it nearly doomed the build). On top of that, it took him nearly two years to convince Bob to work on it. When he did, Stapleton smoothed fields of hail dents from the flats, excised a lot of rust from the lower fenders and doors, put up pristine rear quarters and inner fenderwells and completed the cure with a fresh trunk pan.

Steve and Eric considered the grunt-heavy 502 and the drivetrain to complement it. Since the goal was going cruising and not going into combat, he looked to the beefiest four-speed automatic. Adapting the 4L85E transmission required the original mount and crossbrace be relocated a skosh to the rear. Eric modernized. He improved throttle response and driveability with a FAST throttle body and its supporting cast. He put hefty Baer discs all around. He cemented the nostalgic air with classy, classic Halibrand alloys with rubber so modest that installing wheeltubs was never considered.

Where he would be, Steve left the accommodations to Harry Funke at his Morgan-Bulleigh Interiors shop. Blinding white vinyl meets a contradictory black underlayment and pops like a cherry bomb. There are no rollcage or harnesses to interfere with its subdued personality.

Epilogue: The epic took about 10 years to complete and cost Steve more than he could have imagined. What sticks in his mind? “Driving the car home for the first time after my uncle had quit driving it for years,” he said. The most challenging aspect was getting the bodywork completed by someone he could trust. “When I got burned by the previous body guy I almost gave up the project.” It helped that I had friends into hot rods. If I had not, I would have definitely had to do more research and talk to a lot more people for ideas. I can thank Eric Sorenson for that,” he said. CHP

It started as a TV-show-inspired, father-and-son project, then became this show-stopping 1966 Chevrolet Impala, brought to life by Big Oak Garage.