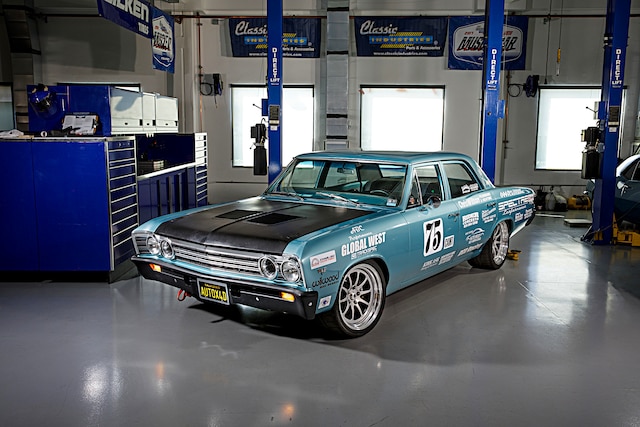 The 2017 Classic Industries Super Chevy Muscle Car Challenge presented by Falken Tires was a sea of carbon fiber, louvers, fender flares, and thoroughly modernized Detroit iron. Cruising stealthily through that modernized and mechanized flock, a wolf in sheep’s clothing, was the ’67 Chevelle of Michael Erickson. Where other cars had two doors, Erickson’s had four. Where power-dense and lightweight LS engines burbled with mathematical precision, the Chevelle idled with the arrhythmic and unmistakable thump of a carbureted big-block. Shifter stalks that grew from the floorboards of other cars were noticeably absent. Instead, Erickson’s shifter sprouted from the column, linking not to some sophisticated five- or six-cog box, but instead to an ordinary slushbox. It was the antithesis of Pro Touring–and yet it wasn’t.

The more-door Chevelle was the gut punch no one saw coming, and at the Muscle Car Challenge it proved it had every right to be on a racetrack–with turns. “I built it to make the people that thought ‘it’s a four-door’ get bummed when it beat them,” said Erickson. “It’s a total sleeper. I built it mainly for autocross, but I do everything with it.”

The car, which recently finished sixth in its class at the Optima Ultimate Street Car Invitational in Las Vegas has begun to amass a long list of fast times, and undoubtedly a collection of bruised and battered egos along the way.

Off the showroom floor, the Chevelle sedan was less corner carver and more people mover. But while Erickson may not have massaged adrenal glands in factory form, it’s now perfectly up to that, as well as testing the constitution of a few, weak stomachs. The newfound agility comes courtesy of a host of trick suspension components that let it do what no one ever thought it could.

Beginning at the front, the car is equipped with a Global West KT423 Negative Roll System suspension, the heart of which is a forged-aluminum, modular spindle that radically alters the car’s camber curve, allowing the tire to remain flatter on the pavement as the chassis rolls. The spindle is paired with tubular upper and lower control arms that all work in harmony to virtually eliminate bumpsteer and improve the steering Ackerman angle. Sophisticated damping force is provided by Penske racing coilovers mounted front and rear.

Erickson has an assortment of Global West sway bars, ranging from 7/8- to 1 5/16-inch, he switches between depending on the event. “On a slick course, I’ll run the 7/8-inch bar and let the car roll over a bit so that it doesn’t lose grip,” he said. “If you get the car too stiff then the tires can’t hold.”

In the back, the Chevelle uses a stock-style triangulated four-link suspension augmented with Global West adjustable control arms on both the top and bottom. To fit bigger rubber, the rear of the Chevelle received an ABC Performance mini-tub installed by Perales Style and Custom. The mini-tub required custom upper arms to clear the chassis mods, but that didn’t alter suspension geometry from shelf-stock parts.

The real rearend witchcraft is the work of a specialty Strange Engineering, fabricated 9-inch-style axle with built-in camber. “It’s not just a bent tube [an old circle track racer trick],” said Erickson, but instead a specially engineered full-floating hub system that uses “football shaped” splines to allow slight misalignment between the wheel hub and the axleshaft. “It currently has 1.5 degrees of camber, and Strange is sending me a 2-degree hub to test out. It also uses adjustable toe plates.” That little bit of camber, the lack of which was previously an inherent shortcoming of a solid axle design, clearly does wonders to help the car maintain grip.

Under the hood, the Chevelle is all muscle with a 454ci big-block Chevy–not your typical Pro Touring mill. “It’s not an LS,” laughs Erickson. “I didn’t want to do that!” The internals are all forged and an Edelbrock top-end kit, with a Gen 6–specific hydraulic roller cam to help move air into the cylinders. With a Demon 850-cfm carb breathing through a Spectre dual-inlet air cleaner and Sanderson shorty headers flowing through a full, Flowmaster exhaust, the big block made 450 hp and 450 lb-ft to the tires.

Behind the big-inch big-block is a TH400 transmission with a Hughes converter. “It tore up several converters and Hughes actually shipped my trans back and rebuilt it for me,” said Erickson. “It turned out all of the on/off throttle of autocross with the big-block was tearing up the thrust bearings, so they rebuilt it again and hooked me up with a Hughes monster-truck style converter!”

Inside the Chevelle, the sleeper theme continues. “The interior looks really stock,” said Erickson. “I kept the bench, though I’ve since added bolsters to it.” A custom bar links the B-pillars and doubles as an anchor for seatbelts to hold Erickson snugly behind the wheel in high-g situations.

The dash is all stock and the only driver information additions were a trifecta of AutoMeter gauges tucked under the dash, measuring oil pressure, water temperature, and voltage. “The original dash is mostly idiot lights,” said Erickson. “So I wanted to keep tabs on the vitals.”

Erickson did all of the work at his shop, Erickson Automotive and 4x4, out of Sand City, California, with the exception of the paint, a factory original hue of Medium Turquoise, the interior refresh, and the mini-tub by Perales Style and Custom.

“Ultimately, I wanted a weekend driver with the Pro Touring look,” he said. “Then I decided to go full-on autocross once I got into the sport (about five years ago). It needed to look like a sleeper and [at the Muscle Car Challenge] I think I surprised a lot of people.” With some amazing performance numbers to back up the sleeper look, we’d be inclined to agree.