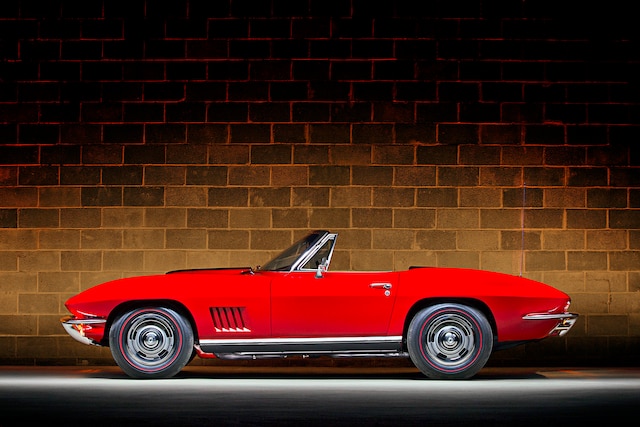 As the story goes, the year was 1967 and he was just weeks away from his next tour in Vietnam. By the time that tour was scheduled to be done, the current body style of Corvette would be no more so he had to put an order in at his local dealer before it was too late. He spec’d out a Rally Red 1967 Corvette convertible powered by a 400-horse 427ci big-block paired with a Muncie M21 four-speed transmission. It was the Corvette of his dreams, but it was scheduled to be delivered while he was serving overseas so he would have to wait until he returned to enjoy it.

Unfortunately, he was one of many who proudly went off to serve our country and never returned. In his memory, his family held on to the Corvette for a short while before deciding to trade it back in to the dealer to be sold again. Its next owner enjoyed the car for many years before passing it along to its current owner, Joe Catelli of Rhode Island, about 15 years ago.

Catelli found out about the car through word of mouth and couldn’t pass it up. With its numbers-matching Tri-power big-block and four-speed transmission, we certainly don’t blame him. He kept it as-is for a decade or so before deciding to give it a top-notch, NCRS-level restoration. And for that, Catelli went to Mike Mancini and his crew over at American Muscle Car Restorations in North Kingstown, Rhode Island, who began the hard-core, nut-and-bolt restoration early 2015. For the Corvette to have any chance at NCRS recognition, Mancini and his guys would need to go all out in their quest to restore as many original parts as possible. They also would need to go to great lengths to source all the correct N.O.S. parts needed to complete the restoration. As expected, Mancini told us the toughest part of the restoration was “finding all the correct parts for the Corvette with the correct numbers.” And when they did find the needed parts, it was top dollar or nothing.

Some of the parts that didn’t need replacing, miraculously, were the original glass that received a buff and polish, the steering wheel, the dashpads and much of the instrumentation. Even the 15-inch aluminum wheels were the date-coded originals. Obviously, the most notable thing that stuck with the car since it left the factory in ’67 was the powertrain. Everything was still there from the Tri-power 400-horse 427ci big-block and the M21 Muncie to the independent rearend with 3.55 gears and a posi—all of which were rebuilt during the restoration. The engine specifically received a complete teardown and refresh with new bearings, a 0.020-inch overbore and new forged pistons. The rest of the original rotating assembly, along with the heads and intake manifold, were reused. Once the big-block was all buttoned up, they ran it on an engine dyno where it made 431 horsepower at 5,000 rpm.

While most other parts can, one way or another, be restored or replaced with N.O.S. counterparts, the paint is something entirely different. Mancini couldn’t just do the usual bodywork then spray the car in a matching color. After hours and hours of painstaking fiberglass and bodywork, he had to find the identical paint code then use a single-stage paint just like the factory did. And that wasn’t the end of it; the paint was only buffed and polished on the outside and above the fender line while anything below that fender line or in places like the doorjambs had to be left completely alone. Then, when it came to body panel fitment, the panel gaps had to be good (maybe even better than stock, but don’t tell Chevrolet that) but they couldn’t be too good or they risked getting docked by NCRS judges.

Speaking of NCRS judges, as soon as Mancini and his guys completed the restoration, Catelli’s 1967 Vette went under the magnifying glass. The goal? To score as highly as possible with the hopes of an NCRS Top-Flight award. Any Corvette between 1953 and 1999 that wants to shoot for Top-Flight has to score better than a 94 percent on the comprehensive inspection. And when we say comprehensive we mean it because the judges score sheet is out of a total of 4,500 points. Anything more than 270 points deducted and you’re out.

Not only did the ’67 make the cut for NCRS Top-Flight, it also went on to take home Concours Gold at both the Muscle Car and Corvette Nationals and Greenwich Concours d’Elegance. Now the Vette lives in Catelli’s growing collection of top-notch Corvettes and other ’60s-era American muscle where it will surely be preserved for many more years to come. Vette