1965 Corvette Found Near its Home

Rare Finds: Finding a 1965 Coupe in a Neighborhood Shed 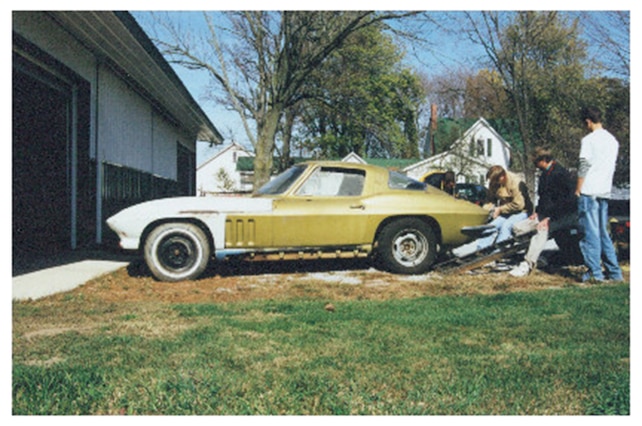 The sense of awe that accompanies discovering an old Corvette stored or lost for many years can be intoxicating.

Kris Smith wasn’t looking for an old Corvette when his son Justin came home from college with a story that a buddy told him about a 1965 coupe parked since 1973. Kris said the Corvette was 7-8 miles from their home in rural Indiana, with amazement in his voice. He had to have a look.

“Justin got hold of his buddy and we went over there. This elderly couple that lived out on a farm had died and their brother/brother-in-law Jack had stored the car on the farm. Jack, who bought the car in the late ’60s, was losing his storage and was now retired. Finally, the car had to go. The fascination in Smith’s voice was apparent as the story unfolded.

“It was originally a black car. They had painted it Riverside Gold. It had only 36,000 miles, but it had been hit in the front end.” The wreck was an old one that Jack tried to fix on his own when he bought the 1965 Corvette coupe. Jack got transferred to Florida and the car stayed on the farm.

As Kris talked, he did not mention the engine option in the car. He spoke about the car’s history. “It was sitting in that lean-to type building that you see in one of those pictures looks like they almost built it for that car. We found boxes with shipping labels on them with new carpet. Of course, mice had chewed it up. It was just stuff like that, stuff he had bought.”

Kris was also intrigued at the purchase price in the late ’60s. The 1965 Corvette wasn’t running and was wrecked in the front end. “He only paid $600 for it. In the pictures, you can see Jack had put a new partial doghouse (front end) on it.”

Why did Kris buy the 1965 coupe? In his words, “I thought with some of the options it had on it, the mileage it had, and those kinds of things, it was worth the restoration.” Could Kris have found a better deal on a different ’65 coupe, maybe even with the top-dog 396? Probably, so why did he buy this small-block coupe with a basic 327 four barrel? The answer to this question was hard for Kris to explain. He tried.

“I had four brothers. When we were kids my parents would help us buy cars. We had Corvettes and Z/28s and GTOs and Mustangs. My first car was a ’66 427 Corvette convertible. That was in 1974. I got it for my 16th birthday. We sanded the thing down, masked it off, took it to the local painter in my hometown, and he painted it for $90. It was a beautiful car when done. That was our thing.”

Kris loved Corvettes, but sold the ’66 427 Corvette when he was still in high school because he “didn’t know then.” Or, as his wife likes to remind him, “That is why 16-year-olds shouldn’t have Corvettes.”

Kris’ time the past 20 years has been consumed with his business and family. He still buys cars to restore, but farms out most of the work. Did it cross his mind to find a better 1965 for a starting point?

The answer is “not really.” Kris does remember thinking when he looked over the Corvette, “If it had been a 396,” which was the hot engine for 1965, “but it was black. It had air conditioning and power brakes, which are both rare.”

Sixteen years has passed and Kris still owns his barn find. He gathered the parts in his spare time and paid for the restoration as the work progressed, starting a couple years after purchase and consuming 4-5 years. Considering the low price that he paid and the investment over time (not a penny owed), Kris figures he has less in the Corvette than it is worth today. Vette

Would it have made more sense to go find a better deal on a restored ’65 coupe? Kris revealed his love for Corvettes when he said, “We recently sold a ’69 Camaro pace car that needed to be restored. I could go buy one done for less than that one was going to cost to restore. Had that Camaro been a Corvette, I probably would have restored it.”

Kris stood with his wife, Sue, beside the ’65 Corvette after the restoration was finished. They still own and love this Corvette.