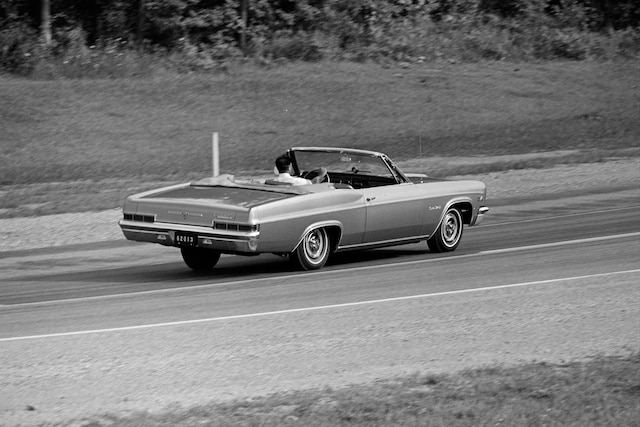 At Chevrolet’s preview of its new-for-1966 models held in July 1965, Petersen Publishing’s photo chief Bob D’Olivo captured a boat of an Impala convertible lapping a GM proving ground. It’s hard to make out in the photo, but there are crossed flags on the Imp’s front fenders, a tip-off that this was no everyday boulevard cruiser. It was a Super Sport, powered by a top-of-the-line 427 and backed by a four-speed, no less.

Chevy’s big-block offerings grew to 427 inches for 1966, and two versions were offered for fullsize cars and Corvettes. The L36 was stout, its 10.5:1 compression and hydraulic cam working to produce 390 hp and 460 lb-ft of torque. But with four-bolt mains, bigger valves, a solid-lifter cam, tighter squeeze at 11.0:1, and a Holley four-barrel, the L72 was truly the hot setup. For about a minute it carried a 450hp rating, though Chevy soon pulled that back to a (little, anyway) more insurance-friendly 425.

(When Don Yenko and other supertuners planted the L72 in Camaros a year later, that rating quickly returned to 450.)

We wish Motor Trend, which published some of these photos in a Nov. 1965 new-car roundup issue, had produced a full road test on this rare beast. Instead, all we get are a few lines describing what had to be a sublime experience:

“One [car] left an indelible impression. This was an Impala Super Sport convertible with the 425-hp 427, 4-speed, and 3.31 axle. The combination produced unbelievable acceleration at any speed from standstill to well over the century mark, and, with the suspension package, felt very sporting in the turns.”

The closest MT got to testing such a car was when John Ethridge put the spurs to a 427-powered Caprice hardtop in the April 1966 issue. Since the Caprice was fitted with the L36 version of the 427, a three-speed automatic, and 2.73 gears, it’s an apples-to-oranges comparison, really. But his impressions and test data give us a feel for what the hotter car might have done.

Ethridge complimented the Caprice on its smoothness and said “the big 427 has power to spare—enough, in fact, to push 4,220 pounds of Caprice with two passengers and test equipment aboard into the performance car category. Without any of the brutishness that’s usually part and parcel of a truly powerful engine/big car combination, the performance of our test Caprice was quite deceiving. Judging from the feel of things, we would have guessed times about a second longer than we actually got with test equipment for both 0-60 and the quarter-mile.”

“Very sporting,” for sure.

Photos by Bob D'Olivo and courtesy of Petersen Publishing Archives