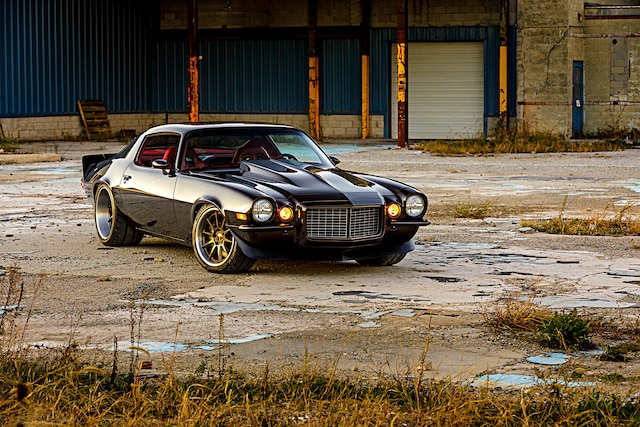 Don Houser is a logistics manager for Caterpillar, Inc., so he’s used to dealing with that Big Yellow on ton-over-tons machinery. Man, the stuff’s not bashful. This elephant in a phone booth probably pushed him in a certain direction when it came to building his Camaro. Don had a serious yen to exhibit his work in closed-course series. He built the Camaro to compete in autocross and at track day events.

He craved a stick shift. And how did that occur? His loving father planted the seed deep and early. When the kid was 5, his old dad would perch him on the transmission hump and let him shift from Low to Second in an old four-speed car. Don’s young brain schizzed. He realized that one of his synapses refused and would no longer close … and that somehow he would be hooked on this stuff inextricably. Years passed. Adulthood couldn’t be ducked.

He settled in for the long haul—a trip that encompassed four years of angst and joy. He did it with people close to him: his son Henry, cousin Jeff, and his agents on the outside: Tony and Chris Smith (Smitty’s Custom Automotive) and the talent at Trent’s Trick Upholstery.

He bought his project in 2012. There were three reasons that framed his mind: it was original, it was solid, and it was a real RS/SS. It had a 1970 Duke University parking permit on the rear bumper. “I called the guys at Detroit Speed and they recommended Smitty’s. I spoke to Tony Smith for a few minutes and he invited me to the shop.

“After seeing the quality of the work and speaking with Chris, I knew they were going to complete the build,” said Houser. At the very beginning of the vortex he was happy with the Camaro’s exterior styling but he wanted to make something that would really stand out in the Second-gen crowd. “That’s when I decided on the color brown when most others are silver, orange, black, or some shade of blue.” Ambient light is the delineator; without it this car could be all the way black, but certainly not brown. For an unusual contrast, instead of dressing the interior in tan rags, he was drawn right to the red. And see how well it works.

“Thanks to Trent VanArsdalen’s guidance, the interior turned out incredible and has elements I’ve never seen … stainless wire in the [custom] door panels, the pattern stitched in the seat cushions and headliner matching the stainless wire pattern in the door panels. Then the harness bars that were fabricated by Dan Dreisbach.” Since the Camaro’s rear seats are just package trays, Don and Trent elected to eighty-six ’em altogether, but they didn’t want to stuff the crater with the usual camouflage panels. So why not put the crater to work instead?

Dreisbach and VanArsdalen created the aluminum harness bars, the likes of which we’ve never seen before, and anchored them in the rear seat wells. Though Don might have other thoughts about the exclusivity of his Camaro, anyone who sees that hairy solution is likely to remember the car more for that than its tasty dark-brown crust or its unlikely hot-red center.

Since the project was far from inexpensive, whenever Don had opportunity he was respectful to his wallet. Rather than gather components and scratch-build a bullet and worry the details, he plucked a projectile from Chevrolet Performance that was dressed out from the top of the intercooler to the bottom of the oil sump. Since a six-speed manual was always part of the plan, Don inserted a Chevrolet Performance steel flywheel and twin-disc clutch assembly and attached the gearbox to the supercharged LSA with a Chevrolet Performance bellhousing and hydraulic linkage.

The formula for the car had to include a willful stance highlighted by the most complementary rolling stock in the universe. Unfortunately, the de rigueur components have become common to and popular with this ultra-roadworthy Pro Touring genre. The profile embraces dusky and decidedly un-cute Forgeline wheels paired with brutal Nitto skins. These things look like they’d rip ass all the way to Fayetteville without breaking a sweat and be just as bloody useful on the way back out.

Wherever the car is you can be sure that Don will be in it, not thrashing but enjoying and almost relaxing. Though we’re no fans of crimson, the execution and the particular shade of red is, however, soothing. There’s urgency there but it doesn’t dominate or tend to crank up the subconscious.

Any thoughts Don has about the project are dominated by what he should have done in the first place. “Start with a rendering,” he opined. “After picking the odd body color I had an idea to make the interior tan, but everybody does that. I wanted something different … and I was lost. Thanks to Trent for his professional guidance.”

Underneath it all, the kid wobbling on the transmission hump all those years ago confides: “In my heart, I built the Camaro as a tribute to my dad.” CHP