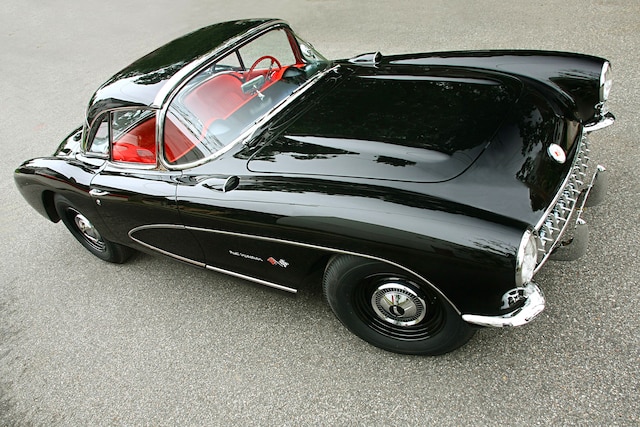 The very first thing a person needs to establish when they take a rare Corvette to a shop for restoration is to make sure the shop owner clearly understands his directions are to restore the car and not just store it. Otherwise one might end up with a $75,000 storage bill like Phil Bachman of Greenville, Tennessee, did with his Onyx Black ’57 Airbox Corvette.

That’s not exactly how the saga unraveled; the large payment was more to settle a legal dispute that festered after the car sat 19 years with nothing more than disassembly taking place. And then to complicate matters, toward the end of that nearly two-decade wait Phil had a debilitating stroke, and, coincidentally enough, the Corvette shop owner had a debilitating stroke around the same time.

Enter Phil’s son to help sort out where Phil’s cars are and the title for the ’57 Corvette Airbox comes to light. A Google search later and the VIN number pops up as a mechanic’s lien taking place at a shop in Georgia. Phil’s son contacts Kevin Mackay at Corvette Repair of Valley Stream, New York, and hires Corvette Repair to retrieve the Airbox from Georgia and complete a frame-up restoration.

A little background on Phil. He’d been a Pontiac/Cadillac dealer in Tennessee for many years and for just as many years he’s had a love for Corvettes, amassing a collection of examples he bought brand new ranging from 1960 to 1968. Phil still owns every Corvette except the ’60, which was stolen, and in a different manner that was almost the fate of the Airbox.

Phil is not the original owner of the Airbox. He told Vette he paid $150,000 in 1992 to J.D. Purvis, a well-known Corvette hunter that bought it from John R. Marcotte, a member of the original owner’s family. This 1-of-43 RPO 579E Airbox Corvettes produced was in ragged, unmolested condition complete with leftover traces of a rollbar and a stack of documentation confirming its sale from Don Steves Chevrolet in La Habra, California. Corvette fans with knowledge of early road racing history will recognize Don Steves as a team owner, and the dealership where Dave MacDonald, the greatest Corvette driver that ever lived, worked and raced.

A less than friendly rendezvous, it was the Corvette shop owner’s son that showed the Airbox to Kevin. Mackay explained to Vette when he first saw the Airbox in Georgia it was completely disassembled, but as he searched around everything that came off the car was found somewhere in sight. Once the terms of the ransom were agreed to and paid for, the Airbox was transported to Valley Stream, New York, where Corvette Repair went to town restoring.

Take a look at the detail photos of the 102-inch wheelbase chassis and you’ll notice a part number stenciled on a framerail that ends in -43, that’s just a coincidence and has nothing to with the 43 RPO 579E Airbox Corvettes produced. The factory-authorized production run for the ’57 Corvette Airbox was for 50 units, leaving the question as to why only 43 were produced. Chevrolet listed the curb weight for a base model ’57 Corvette at 2,849 pounds, and took measures to reduce the curb weight of the RPO 579E cars.

To help authenticate an RPO 579E, one of the dead giveaways is to look on the underside and one should find a coarse fiberglass white-matte finish sans undercoating. Refer to the undercarriage photos pictured to see what we’re talking about. Corvette Repair prepared the surface and re-sprayed the underside of the floor and trunk pans with an exact color match to original.

The year 1957 saw pinnacle gains in high performance on and off the track for Corvette. The new-for-1957 283-cubic-inch engine with 10.5:1 compression and mechanical fuel injection produced one horsepower per cubic inch and the cold-air induction offered by the Airbox option was believed to add 7 horsepower at speed. A heavy-duty right-side engine mount was included in the package that produced a gross rating of 283 horsepower at 6,200 rpm and 300 lb-ft of torque at 3,000 rpm. The year 1957 also saw the introduction of Chevrolet Orange, the engine color that remained in use until early 1977 on Corvette engines.

RPO 684 heavy-duty racing suspension with big brakes option. Unfortunately, the cold air sucked in by the Airbox into the fuel injection didn’t leave much cool air left to run through the air duct in the rocker panel to effectively cool the driver-side rear brake. Look at the photos and you’ll notice an air scoop on the backing plate that covers a vented screen for cooler air to pass into the finned cast-iron rear drums with metallic brake pucks mounted inline on conventional brake shoes. Even with a standard additional leaf spring and heavy-duty shock absorbers add rear suspension travel up or down, and the cooling duct in the rocker panel became misaligned with the rear brake scoops, diminishing cooling further.

An option that arrived available for all Corvettes produced after April 8, 1957, a four-speed manual transmission was standard for the Airbox cars. As was a mandatory deletion of the radio and heater replaced on the dashboard with a radio and heater delete plate. And since there was no need for radio interference suppression, the polished stainless steel distributor cover wasn’t factory fitted, along with rerouting unshielded spark plug wires further away from the ram’s-horn cast-iron exhaust manifolds new for 1957.