TCI built this Nova in just 21 days to tackle our battery of tests!

Crunch Time: Andy Mule and the TCI Team Built This ’66 Nova in 21 days! 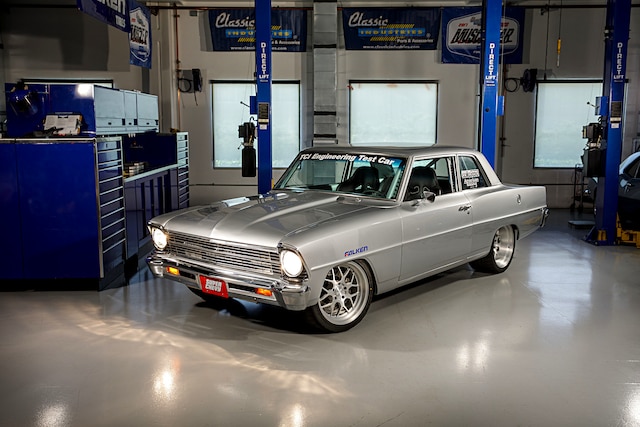 Project cars have a way of going stagnant. They are always bought with the most optimistic intentions of restoration heroism. But, more often than not they take anywhere from two to five times longer than anticipated. There is, however, a magic elixir for expediting any build: a destination event. Whether it’s the local car show or the pinnacle racing function of the year, setting a deadline for your signature shindig can help motivate and facilitate a quicker completion.

Andy Mule didn’t get to pick his deadline; the team at Total Cost Involved Engineering (TCI) sort of thrust it on him. Twenty-one days to get the car ready for the 2017 Classic Industries Super Chevy Muscle Car Challenge presented by Falken Tires. Of course, Mule and the TCI crew of Sal Solorzano and Evan Daley are good friends and they agreed to let him use their shop to make the date—a fair trade by our standards.

“I had bought the car previously from Sal, and was already building it,” said Mule. “Sal came up to me and said ‘Hey, we’re going to take your car to the [Muscle Car] Challenge.’ I said, ‘Sal, it’s just coming out of the paint shop!’ He said, ‘Good, you can finish it over here.’ So I took it to the TCI facility and took advantage of all their lifts, tube benders, welders, and other tools. If I did it in my garage, it would have probably taken me about three months.”

The rush to take the car from fresh paint to full race was a textbook example of gearhead hustle. Of course, Mule’s past experience played a part in the precision and the speed at which the car went together. “I was an aerospace machinist forever,” laughs Mule––certainly a skill set that aided and abetted in the automotive anarchy of those 21 days. It also didn’t hurt that Mule is a Nova nut. “Andy the ‘Nova Guy.’ That’s what they call me,” he said. “I buy/sell/trade parts for these cars from 1962-’67. I have buckets of parts.”

Impressive as it was, the tight timeline didn’t leave much time for testing. “We built the car just before the [Muscle Car] Challenge,” said Mule. “It came out of the body shop and 21 days later it was done. One day before [the event] we ran it up and down the street in front of the shop and loaded it up on the trailer.”

A run-through of the hurriedly installed mechanical bits consists of a BluePrint Engines LS3-based 427ci engine topped with a Quick Fuel 850-cfm carburetor. The engine churns out 625 hp and 550 lb-ft of torque (per BluePrint) through a McLeod RXT clutch and a TREMEC six-speed transmission from Silver Sport Transmissions. Out back, the differential is a Currie Enterprises fabricated 9-inch housing stuffed with an Eaton Truetrac limited-slip differential. An MSD LS controller handles the ignition, and Joe Ellis built custom headers to move the spent gasses through a 3-inch system that culminates in MagnaFlow mufflers.

The task at hand was, after all, a suspension challenge, and Mule came loaded for bear. The Nova features a full complement of TCI suspension bits. At the front is their Pro Touring front clip with tubular upper and lower control arms, triple-adjustable RideTech shocks, and a power rack-and-pinion along with a meaty sway bar. The setup bolts in place of the Nova’s antiquated, flimsy stock suspension.

Out back, Mule equipped the car with a TCI Torque Arm suspension. This design is a unique three-bar style (two long, one short) that allows the rearend plenty of articulation while eliminating the binding of the original leaf spring arrangement. The long bar also helps the car to plant the tires on acceleration. As with the front, the rear suspension is a bolt-on affair.

Handling the braking duties is a Wilwood pedal assembly, master cylinders, and a complete set of 13-inch rotors and six-piston calipers at each corner. Rolling stock consists of American Racing wheels, 18x10 in the front and 18x11 at the back. Falken provided the rubber, which measures 275/35/18 in the front and 315/30/18 in the rear.

At this point you must think the Super Chevy crew has gone off the deep end, ignorant of the Nova model years, but Mule’s ride really is a ’66. “I put a ’67 front clip on it because I just really like the ’67 style,” he said. With the buckets of Nova parts in his garage, that likely wasn’t a monumental task. “Classic Industries provided the bumpers, grille, and a lot of trim parts,” said Mule. The Corvette silver paint was expertly applied by Quality Customs in Montclair, California.

Inside, the Nova is all business with a relatively stock interior and a full complement of AutoMeter performance gauges. The rollcage was built by McCarthy Fabrication in Riverside, California, and does double duty by offering driver protection and stiffening the Nova’s factory unibody. The rear seat was deemed non-essential––because race car––and Eddie Motorsports billet door handles and hinges add a little bling to the utilitarian cockpit. Precise steering action is handled by an ididit column.

Mule is no stranger to performance driving or racing, but autocross was a fairly recent venture for him. “I went to a couple autocross events with Sal and Evan and thought, ‘Wow! I’ve gotta do this,’” he said. “I used to race a ’63 Nova Super Gas car but I got out of that because my wife didn’t like the speed (180-plus-mph in the quarter-mile). Autocross is really fun and you don’t get close to those speeds … so she liked it.”

And so did Mule. “It’s more of a challenge to me than drag racing was,” he said. “You can buy horsepower, but you can’t buy talent. I love trying to get around the corner really fast, see my time, and beat it. I take it to just about any autocross event I can get to.”