Round Two: Joseph Silhan buys back his 1966 Chevy II for a second time 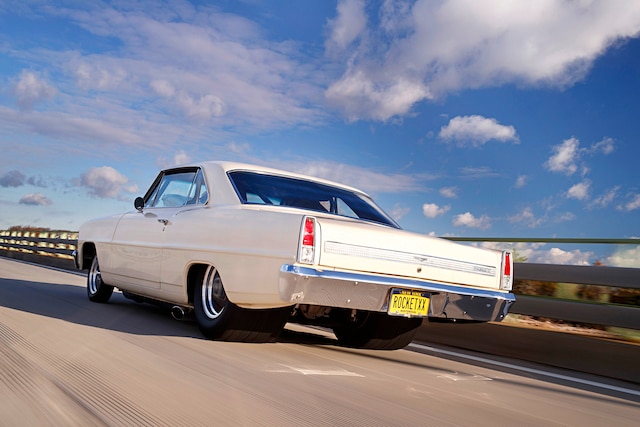 When GM initially conceived of the Chevy II in response to Ford’s Falcon, they aimed right for the middle of the bell curve in order to appeal to as many buyers as possible. The Chevy II was introduced in 1962 and it was immediately clear that they hit the bull’s-eye, creating a car that did everything reasonably well but nothing exceptional. In a few short years, however, designers and engineers would transform the ordinary into something extraordinary, beginning with the introduction of V-8 engines in 1964 and then a substantial second-generation restyling for the ’66 model.

The sharper-edged bodywork introduced for the ’66 model year was immediately popular and helps make the second-gen Chevy II a favorite to this day, especially with Pro Street enthusiasts. The styling was certainly a prime motivator for Joe Silhan, who bought our feature car on two separate occasions, and swears he’ll never part with it again.

This particular Chevy II was built by Stephen Agnello, who happens to be a restaurateur by trade, but who clearly knows his way around a MIG welder and spray gun. Agnello bought the car as a roller from an Internet website and, working in his basement shop, immediately stripped it down to a bare shell. He then sandblasted every inch of the body and replaced most of the car’s sheetmetal, including the quarters and floors. After fabricating huge tubs and a custom transmission tunnel and adding a rollcage, he did all of the finish bodywork, and then sprayed it with a custom-mixed PPG two-stage urethane.

Motive power comes from a Central Valley Machine Shop 548ci big-block, built up using a Dart block and heads. The cam and valvetrain are a Comp Cams setup. An 8-71 supercharger from The Blower Shop is configured to deliver a very modest 4 psi of boost for comfortable street driving. The engine’s power goes through a JW Performance Turbo 400 equipped with a trans brake. CV Machine built a custom driveshaft that initially channeled the engine’s power to a 4.56:1-geared spool, which was good for the track but “too crazy” for street driving. To make the car more user friendly, a Yukon Gear posi rear with 3.73:1 gears replaced the spool. Strange axles cut down by Moser spin the big Mickey Thompsons.

To both help the car hook up and improve overall handling and ride quality, a Heidts subframe/crossmember package was installed up front and a TCI Engineering four-link setup to the rear. The new frontend’s Mustang II rack-and-pinion was coupled with a circle track power steering pump and remote reservoir sourced from Behrent’s Performance Warehouse.

As with the exterior, the car’s interior is low-key, with an emphasis on functionality. The fabricated sheetmetal dash holds a full array of AutoMeter gauges. R.J.S. Racing Equipment seats provide just the right balance of support and comfort. OEM-type carpet and basic door panel trim give the inside a more finished feel without adding a lot of extra weight.

After a solid year of work, Agnello enjoyed his Chevy II on the street and at the track, where it clicked off 10.0-second quarters at 137 mph all day without breaking a sweat. He was always careful to not dip below 10 seconds because he didn’t want to have to install a certified ’cage.

In 2013, Agnello sold the car to Joe Luppino, who fell in love when he saw it at a car show in Bear Mountain, New York. Like Agnello, Luppino enjoyed driving the Chevy II very much, but his ownership was cut short after only five months when he and his wife went their separate ways. That’s when it went—the first time—to Joe Silhan, who also fell in love the moment he saw it.

A year after Silhan bought the car, Luppino called to ask if he’d consider selling it and the timing was right so it went back to Luppino. Over the following year he made a number of changes, starting with the installation of Wilwood front calipers in place of the Mustang II calipers that were part of the Heidts subframe kit. He also installed Billet Specialties wheels, a Harwood Industries cowl-induction hood, a transmission cooler, and electric fans.

Just when he had the car fully dialed in, looking and performing exactly as he wanted, Luppino got a call from his old pal Silhan, asking—you guessed it—if the car was for sale? Coincidentally, Luppino had just lost his job, so he reluctantly agreed to sell, but with the promise that when Silhan was ready to part with it he’d call him first.

“If I ever want to sell it, I’ll call Joe,” Silhan tells us. “But realistically speaking, I don’t see that happening because this car is so nice. I would actually call it perfect. It’s a great driver that my son Francis and I enjoy very much, so I don’t anticipate selling it again!” CHP

David’s build and subsequent performance use of his 1966 Chevy II Nova wagon is quite commendable, to say the least.

Steve and Marge Spang own this 1966 Chevy II Nova and had visions of a muscle car with modern day amenities. Check out their finished restoration!

While on the outside Tobie Johnson’s 1966 Chevy Nova might just look like a simple stocker with some wheels bolted on, if you looked inside this fabulous Deuce, you’d find the heart of a thoroughbred.

Check out this 1966 Chevrolet II that has a stroker 383 connected to a 700-R4 transmission. Read more only at www.chevyhiperformance.com, the official website for Chevy High Performance Magazine!