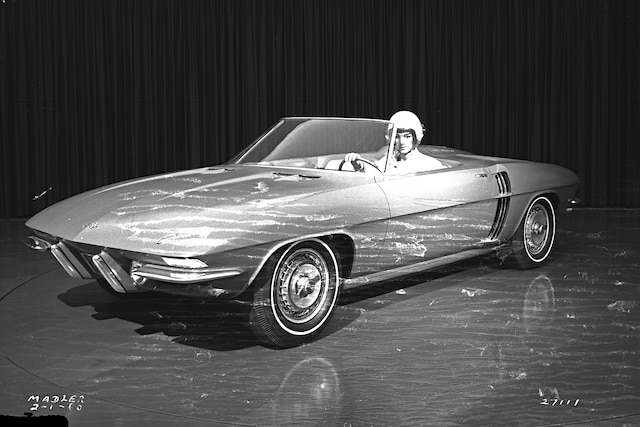 The 8x10 black-and-white glossy was stuck in a folder in the Petersen Photo Archive marked “1959 Corvette.” But from its rear-three-quarter view the car looked like no other ’59 Corvette we’d seen, more like a cross between an early C2 convertible and a Corvair. The print bore the markings of a GM factory photo: a frame number; photographer’s name; and photo date, 2-1-60. On the back, someone had written, “The first mid-engine Corvette proposal 1959.” We had to learn more.

We sent a copy of the photo to our friends at the GM Heritage Center, and a few days later they sent us a proof sheet with several photos of the car in various stages of development. They also sent us a copy of what they described as a “nearly blank” engineering record of the car. On that sheet was the car’s code number, XP-719; its description as a V-8 rear-engine Corvette; the “Program Instigated” date of 6-4-59; the car’s location, Advanced #4; and names of the engineers responsible for the car, Renner-Hill.

So few words, so much sleuthing to do….

Zora Arkus-Duntov long yearned to develop a mid-engine Corvette, development that took off in a big way with his CERV I prototype, which was built right about the time this car was on the drawing boards. The XP-719’s trim proportions, in fact, make us wonder if this was intended to be a body to slip over a production CERV frame.

There have been other notable mid-engine prototypes, including XP-880, aka the Astro Vette; the rotary-powered XP-892; and the XP-882, which started life with a big-block out back before a four-rotor Wankel replaced it. All those cars, though, were built in the late 1960s and early 1970s.

We couldn’t find out much about one of XP-719’s designers, Ron Hill. Carl Renner, though, had been involved with Corvette styling since its earliest days. In fact, his contemporaries believe Renner’s designs had a big influence on the look of the first Corvette, though there’s no way to confirm that now, since Harley Earl kept the project so secret and Renner passed away in 2001. We do know he designed the coves for the 1956 redesign and 1961’s “horizontal creased rear end” as he called it, a design cue found on XP-719 as well.

The GM Heritage Center said all these photos were of XP-719, but there are distinct differences between the mockups shot in 1959 and the 1960 version, especially around the rear quarters. Early on there were small ducts ahead of the rear wheels, and even the makings of a tailfin on the driver’s side. Those ducts grew quite a bit taller by 1960, as designers likely recognized the need for additional airflow to the engine.

Along with the shots of the car came a fascinating series of photos that shows a two-dimensional operational mockup of a stowable hardtop for XP-719 that tucked under the back decklid.

None of our research books about Corvette mentions XP-719. Even Google drew a blank. We have to guess that, given the limited records in GM’s archives, this project was stillborn fairly early on, as decisions were made to follow a conventional drivetrain layout for the C2 to come. Still, it’s an interesting look at what might have been, had Duntov’s dream of a mid-engine Vette come true nearly 60 years ago. Vette

Time has not been kind to this 58-year-old negative, but the XP-719 prototype is clearly visible beneath the stains.

This print from the Petersen Photo Archive started our search for info on the car. “The first mid-engine Corvette proposal 1959” was written on the back.

That’s engineer Ron Hill (left) and Larry Shinoda posing with this fullsize rendering of XP-719. The photos thumbtacked above the drawing show a clay model that looks like XP-719, some posed with a contemporary Vette.

Note how much smaller the rear duct is on the earlier versions of the car. On this side of the car the designers are grafting in a tailfin.

This sequence shows a two-dimensional mockup of how designers imagined the XP-719’s stowable top would operate out of its well behind the cockpit. It’s hard to see in the photos, but the dark top mechanism is attached to a fullsize line drawing of the car’s rear