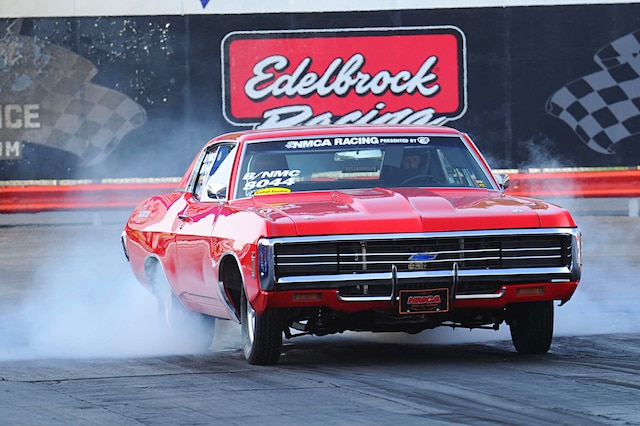 Big Red Beast
For fans of the NMCA drag racing series, the vast contingent of Chevrolet machines is a consistent part of the attraction. Wade Wells’ deceiving ’69 Chevy Caprice is another testament to the series. Wells, who is from Springfield, Alabama, and is a certified fluid power specialist by profession, races his rather rare configuration within the NMCA’s Nostalgia Muscle Car category. This car is quicker and faster than you might think. Using a 555ci, 800hp-plus engine since 2012, it has been both a regular runner and a late-round finisher within the category using a 10.25 e.t. index. Wells employs a pair of Dart aluminum heads, a solid roller camshaft, a Holley 1,050-cfm four-barrel, and a variety of MSD products to keep his machine running hard. The drivetrain includes a TCI Performance Turbo 400 transmission, a PTC torque converter, a 12-bolt rearend that includes a Richmond spool, and Mark Williams axles. Wells’ fun-loving team is rounded out by his wife, Marcia; Paul Johnson; and engine builder and tuner Phillip Winslett.

Some E.T. Enormity
At the season-ending NHRA Auto Club Finals in Pomona there is a race-within-a-race to crown Summit Racing Equipment World Champions for the four most common and popular ET brackets. In 2017, that elite invitation-only eliminator featured top-rated drivers from all over North America, and one of the winners was Texan Jason Patterson. Racing a ’79 Camaro owned by Brian Gallagher (the owner of Houston Truck Parts), Patterson used some great-looking wheelstands all weekend to steal both fan approval as well as the Summit Pro ET season championship. Patterson’s season trek to the title included first winning the track championship at his home strip—Royal Purple Raceway in Houston—then clinching his Pomona Finals entry with a win at the NHRA Division 4 ET Finals event at Dallas. The second-gen Camaro uses 10.5 Hoosier tires, an ATI Turbo 400 transmission, and a 431ci Chevy engine from the Wop Shop (South Houston). In addition to Jason and Brian, the team includes crewmember Dennis Clark.

Lamb-asting the Competition?
Nevada-based Bowtie-brand drag racing proponent Justin Lamb made a huge impact within NHRA’s Sportsman drag racing scene in 2017. The super-skilled racer, who already had two NHRA World Championships to his credit (Stock, 2013 and Super Stock, 2015), doubled that count last season by winning both the Super Stock and the Stock Eliminator Lucas Oil Drag Racing Series World Championship titles. For that, Lamb became only the third driver in history to win two NHRA World Championships in the same season. Jeff Strickland (2016) and Scotty Richardson (1994), also Chevrolet-brand drivers, are the others.

In Stock Eliminator, Lamb’s title came racing a FS/C ’17 COPO Camaro. Justin had begun the year driving his familiar D/SA ’70 Camaro before taking delivery of his new late-model COPO about mid-season during an NHRA points race held in Sonoma, California. Justin went on to win twice in the COPO, and that, combined with numerous other consistent late-round finishes, pushed him to the top in World Championship points. Lamb clinched the Stock Eliminator championship during a race held at his home track—the Strip at Las Vegas Motor Speedway—during late October.

Mom & Dad bought this 1966 Chevy Caprice new. Now that junior has it, it has morphed into a turbo-diesel—powered burnout-making freak of nature.

» Read More
How to Swap in a Carb-Equipped LS Engine

The LS engine family has altered the landscape of Chevrolet performance almost as much as Gen I series small-block. But fuel injection is a source of trepidation for performing an LS swap into an older vehicle, so we decided to tag along as AntiVenom performed a 5.3L engine swap on a 1987 Chevy Caprice.

Check out this unique 1996 Chevrolet Caprice Hearse! Arne Toman wanted to break some records, so why not build the world's fastest hearse?! This beast is definitely a unique creature, and the artwork on the hood adds even more character!

A 1966 Chevrolet Caprice was considered a family car back in the day. Bruce Litton's Sandalwood Tan beauty is far from that with the 427 big-block it has underneath its hood.