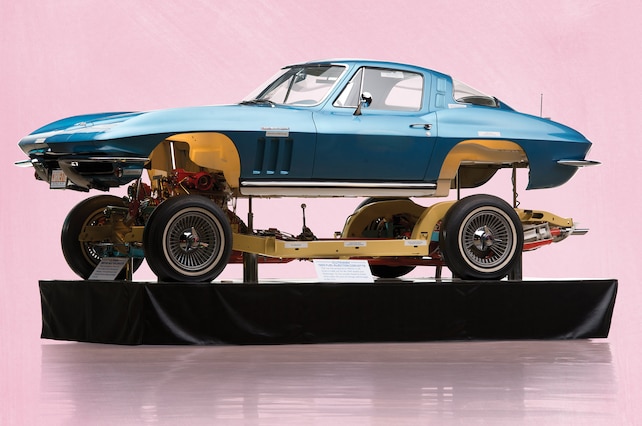 On January 20, 2018, a unique piece of Corvette history sold for a cool $1,000,000 at the Barrett-Jackson Auction in Scottsdale, Arizona. And the car doesn’t even run! Known as the 1965 World’s Fair Corvette cutaway, the pre-auction speculation was that the car would sell for between $1 million and $1.4 million. So the 1965 Corvette cutaway didn’t sell for more than a million, but still, $1 million dollars is a magical number. One that always gets people’s attention.

The Corvette cutaway wasn’t the only high-profile Corvette that sold big. A ’19 ZR1 Corvette #001 sold for $925,000. GM spokesman Steve Hill announced that 100 percent of the proceeds of the sale of the car would go to the Stephen Siller Tunnels To Towers Foundation, to build smart homes for the most catastrophically injured military vets. Frank Siller, the founder of the organization referred to the ’19 ZR1 as “the greatest car GM ever built!”

The ’18 Carbon 65 Z06 #001 sold for a staggering $1.4 million, with some help from Jay Leno and former President George W. Bush. And like the ’19 ZR1, 100 percent of the proceeds went to The Bush Initiative to help our wounded warriors. Also, Barrett-Jackson gave up their commission so that all of the money would go to our wounded veterans.

So, how is it that a 53-year old Corvette with only four miles on the odometer, that can never be driven, sell for 1 million dollars? Answer: Because it’s just that special and unique. We can’t call it a “one-of-a-kind” (two were built), but it’s the one that has been fully restored and functions, as it was in 1965 at the New York World’s Fair. Here’s the story.

The GM Futurama Pavilion was the largest exhibit at the 1964-’65 New York World’s Fair. Car companies were well represented at the fair. Ford debuted the 1964 1/2 Mustang in April 1964, and in 1965 Chrysler was giving rides in one of their bronze turbine cars. In 1964, Chevrolet displayed their cherry red, customized ’64 Sting Ray. For 1965, Chevrolet had three unique exhibits: the new Mako Shark-II, a cutaway Mark IV 396 engine and a very special cutaway ’65 Sting Ray fuel-injected coupe. It was 1965 and a banner year for technology in the Corvette, and GM wanted to show off the Corvette’s fully independent suspension, fuel-injection engine, and first time ever, standard four-wheel- disc brake feature.

It is reported that GM spent somewhere around a million dollars on the display, that’s almost $8 million in 2018 dollars. However, it has to be pointed out that GM had two Corvette cutaways, but only one was at the New York World’s Fair. One account is that the ’65 Nassau Blue Corvettes were taken off the assembly line, and another is that the cars were preproduction mules, or pool cars. Remember, there were two Corvette Cutaways built, so both stories might be correct. Either way, sometime in late 1964, the cars were sent to a company that specialized in dynamic promotional displays for industrial and trade exhibits.

I’m sure that before the cars were completely disassembled; many things had to be worked out. Plans had to be created for exactly what the display would do, how many cutouts would be needed and where, how will the body be a single unit that could be raised and lowered, how the wheels would articulate and spin, and lastly how to build into the engine and drivetrain the electric motors needed to turn the inner components. All in a day’s work for a specialty company, I suppose. Let’s start by looking at the components of the display, paint, cutouts and operation.

The entire display is fully animated. All four wheels turn and move up and down; the engine, transmission, and differential inner components slowly rotate; and the body could go up and down 24 inches. The black stand had mirrors to show the underside of the display. Electrical and mechanical components were hidden behind the black drape. (Photo by RM Sotheby’s)

The frame was painted yellow; the engine, transmission, and drivetrain was painted red; suspension components were painted blue; and the underside of the body was painted white.

The Nassau Blue interior was trimmed with white leather seats and white door panels. Note the non-stock two-spoke steering wheel hints that the car may have originally been a pre-production mule, prototype, or pool car.

Body: The exterior Nassau Blue factory paint was left intact and the underside was painted white. The lower rear valance was attached to the frame. A support structure was created under the body so that four electric screw-type lifts could raise and lower the entire body 24 inches. The platform that the entire chassis sat on had four openings that spun the tires and articulated each tire up and down to show the working of the suspension. And lastly, there was a mirror under the chassis to show the car’s underside.

Cutaways: The engine had the following cutouts: the lower sides of the engine block, the front and rear of both cylinder heads, the top of the fuel-injection plenum chamber, the fuel-injection air meter, the water inlet and intake manifold to expose the thermostat, the bellhousing, the transmission case and tailshaft, the rear differential, the exhaust pipes and mufflers, and the disc brake calipers.

Articulation: Aside from all of the cutouts and contrasting paint, what made this display so captivating was that mechanical items moved. Electric motors were carefully hidden to slowly rotate the moving parts in the engine and drivetrain. The body could raise and lower 24 inches. The following items in the engine and drivetrain rotated: cooling fan, crankshaft, valvetrain, flywheel and clutch assembly, transmission gears, driveshaft and rear differential gears. The wheels and tires rotated and moved up and down.

After the event, both Corvette cutaways toured the USA at Chevrolet dealerships and car shows. But after the ’68 Corvette came out the 1965 cutaway car looked completely irrelevant, so GM sent the car to their South Africa Motorama event. After the event, GM donated the Corvette cutaway to a South African engineering college. It is not known how long the college displayed the car, but consider this. The ’65 Corvette is a “mechanical” performance car. As electronics and computers were introduced into common automobiles, the old “mechanical” Corvette became less and less relevant. Eventually, the Corvette cutaway was put into storage and mostly forgotten.

Someone at the college must have said, “Get it out of here.” The ’65 Corvette cutaway came back to American in the early 1990s and was purchased by Orlando, Florida, collector Al Wiseman. Fascinated with this unique piece of Corvette and GM history, Wiseman oversaw the complete restoration of the Corvette cutaway. It is not known what condition the display was in, but Wiseman brought it back to its original 1965 condition.

In December 2007, when the cutaway ’65 Corvette was on the block at the RM Sotheby’s Auction, a sign next to the car read, “Cutaway 1965 Fuel Injected Corvette. This car was prepared in 1964 by G.M. from a 4-mile car for the 1965 model year Motorama. It was recently found in South Africa after 30 years of storage and brought to the USA.” That means the car had been stashed away since the early 1970s. When the hammer came down at the auction, Detroit’s Showdown Muscle Cars won the bid, with the total sale price of $704,000, including fees.

Then in May 2015, the Cutaway Corvette was back at RM Sotheby’s Auction, but 7 1/2 years didn’t do much for the car’s perceived value. The car sold for just $515,000, plus fees. The automotive press was way off, as it was anticipated that the car would bring up to $1.4 million.

So, the January 2018 sale of the 1965 Cutaway Corvette, just 2 1/2 years after the previous auction might just be a sign of a vastly improving economy. Unique cars such as this have a way of coming back over and over. One million dollars is impressive and I have no doubt we’ll see this piece of Corvette history back on the block again. Vette

What appears to be some GM humor (obviously the car was not for sale) was likely GM legal department policy.

The attention to detail is amazing. Cutouts had to be carefully planned and executed. The clear plastic valve covers showed the rocker arms and springs in slow motion.

The oil pan was clear plastic to show the crankshaft rotating in the mirror below. Polished fuel and brake lines sway bars, and chrome bolts added sparkle.

The backs of the cylinder heads and exhaust manifolds were cutaway; the cutaway bellhousing showed the flywheel, clutch, and pressure plate.

The Posi rear was cutaway to show the gears and limited-slip clutches. Note the chrome universal joints and bolts.