1962 and Then Some: Chevrolet upgraded the Corvette in 1962 with an all-new 327 engine, but Chris Kearney wanted more 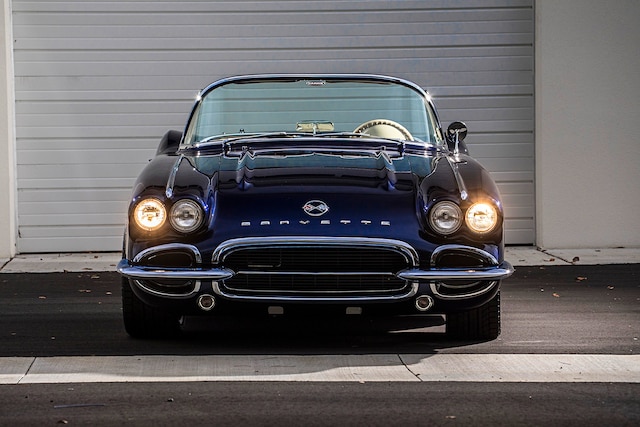 In 1962, Chevrolet was on the cusp of releasing the very first complete overhaul of the Corvette. It was almost a decade since the Vette was born so it was time for a little refresh. As Chevy prepared to transition to the new model, they didn’t completely forget the ’62 model. In fact, the ’62 model was injected with some pretty substantial modernization in the form of the all-new 327ci engine. In its top form, the engine made 360 horsepower, which was almost 50 more than the outgoing 283 could manage in its top spec. Other than that, not much else changed for the outgoing year of the C1.

For Chris Kearney of Charlotte, North Carolina, 1962 was his choice year for the Corvette. “The ’62 Corvettes were always intriguing to me,” he told us. “I think of that model year as the crossover year. Performance was enhanced dramatically with the 327.” But just because performance was enhanced dramatically that year didn’t mean it was quite good enough for Kearney. He wanted something even more. For that, he reached out to Carr Campbell of Carr’s Corvettes & Customs in Plano, Texas, who would build Kearney a Corvette that went a step—or 10—further than the Chevrolet engineers did in 1962.

Kearney ran across Campbell and one of his previous creations at a Barrett-Jackson auction a few years back. “I liked his work so much that I ended up bidding on one of his client’s cars,” Kearney recalled. “The bidding was going higher and higher and I thought, ‘If I like his work so much, why don’t I just do a project with Carr and get exactly what I want?’” Without further ado, Kearney contacted Campbell and they were off to the races.

Campbell started the task of finding a car that would suit the project’s needs. What he came up with was a car out in Beverly Hills, California, advertised on eBay. It had been sitting in the California high desert for years, but everything was there except the engine and transmission so it was just what they needed. Even better, the car had some pretty neat history to go along with it. “As we understand it,” Campbell said, “the car was a race car from the day it was delivered to its first owner. They immediately painted flames on the car all the way back to the windshield and down the doors.” He continued saying, “When we got the car it still had the original paint but it had basically dried out and turned to chalk.” Looks like this clapped-out old racer was about to get a new lease on life.

Over the course of two years, Campbell and his crew turned the old Vette into something more than just a flamed hot rod—it became a top-of-the-line luxury sports car. The transformation started underneath where they tossed out the frame and suspension components in favor of an Art Morrison GT Sport chassis. The high-end chassis is supported by C6 Corvette suspension up front and a triangulated four-link with a Strange 9-inch out back. The 9-inch houses 31-spline axles and a Detroit Truetrac limited-slip differential with a 3.70:1 gear. JRi coilovers modernize the ride and sit at all four corners while the Detroit Speed power rack-and-pinion steering box is a huge improvement over stock. The final piece of the chassis are the brakes. Wilwood 14-inch slotted and cross-drilled rotors with six-piston calipers go in the front and 13-inch, four-piston units live in the rear.

As far as the exterior and bodywork goes, they decided to take it a step further than just paint and chrome. On top of repairing the steel reinforcements in the rocker panels, they went to extensive lengths to modify the rear fenders using 1 1/2-inch wider rear quarter-panels from GTS Customs. Once all the fiberglass and bodywork was completed, Carr’s Corvettes & Customs sprayed the Corvette in Jazz Blue, a deep blue found on later-model Dodge trucks. PPG Deltron was used for the basecoat then finished off with PPG Global Glamour Clear. Then in went a stock reproduction ’62 grille as well as the reworked and tucked original front bumper and grille bar. In the rear, the bumper needed more attention to fit the new width of the quarter-panels. Both bumpers were triple-chromed plated before going back on the car. The finishing touch came in the form of chrome reproduction 2009 Corvette ZR1 wheels, 18x8.5 front and 18x9.5 rear wrapped in 255/35R18 front and 275/40R18 rear BFGoodrich g-Force Sport Comp-2 tires.

Moving into the interior of Kearney’s Vette, most of the original style was retained but with more than a little luxury and modern tech thrown in. Before anything else, the entire floor, all the way up under the dash, was covered in Dynamat. Cut pile carpet from Auto Custom Carpets went on top of the Dynamat while the rest of the interior was bathed in Doeskin leather. The seats and door panels are from Al Knoch while the gauges were all restored originals modified to work with the more modern tech under the hood. A 15-inch Con2r steering wheel and reproduction C1-style shifter were also wrapped in that Doeskin leather to give Kearney the luxurious feel he wanted. But luxury couldn’t be the only addition to the interior of his Vette. He needed some modern tech, too. That came in the form of a Bluetooth-controlled stereo head unit from RetroSound. The head unit controls a pair of Infinity speakers in the kick panels paired with another Kenwood speaker in the dash, all boosted by a Kenwood 400-watt amplifier.

Under the hood is no longer that “modern for ’62” 327ci small-block. In its place, Campbell and his guys dropped in the most modern, reliable and powerful engine they could: a 2015 Chevrolet Performance LS3/480. Holding the A/C compressor and other accessories is a front drive system from Street & Performance in Mena, Arkansas. A DeWitts aluminum radiator and SPAL electric fan keep everything running cool. On top of the engine are a set of trick stock-style Corvette valve covers that have been modified to conceal the LS coil packs. The engine draws fuel out of an EFI tank from Rick’s Tanks while air gets to the LS via a fabricated 4-inch aluminum air intake and Spectre cone filter. On the chassis dyno, the Corvette put down 461 horsepower and 473 lb-ft of torque at the rear tires.

The exhaust system is no less impressive when compared to the rest of the car and is comprised of hand-fabricated 2 1/2-inch aluminized steel held together with NASCAR-style quick release clamps. On opposing ends live 1 7/8-inch long-tube Art Morrison headers and MagnaFlow mufflers dumping out custom tailpipes. Once the whole system was installed, it was disassembled and ceramic coated.

When we asked Kearney what his favorite part of the car was, this is what he said, “The car is absolutely handbuilt from the ground up. It has the classic styling of a ’62 Corvette with the build quality, performance, comfort, conveniences and driveability of a modern, high-end luxury sport car and is extremely elegant with its color combination and endless details that make you look at the car for hours.” To be honest, we couldn’t have said it better ourselves. Vette