From the Archives: “How Unlike Can Two Cars Be?” 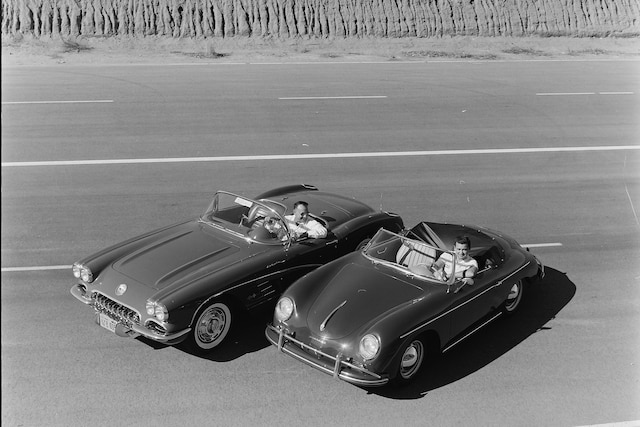 The Motor Trend staff apparently was aghast in late 1958 when associate editor Wayne Thoms suggested a comparison test pitting a Corvette against a Porsche. “You’ve really stuck your foot in it now,” they told Thoms, who relayed their opinions in his April 1959 road test. “You can’t compare a Corvette with a Porsche. How unlike can two cars be?”

Comparison tests were (and still are) a mainstay of the magazine’s editorial package. Just a few years before, the Corvette was regularly compared with its crosstown rival, Ford’s Thunderbird, in a series of stories.

By 1958, though, times had changed—and so had the T-bird. The big, squared-off car it had become was no longer in the same class as the sporty Vette. But putting “Europe’s best sports car” in the $4,000 price class up against “America’s best—and only—sports car”? Now that had potential, thought Thoms.

Right off the bat the Corvette won the power comparison, its 283-inch, 250hp carbureted V-8 handily beating the Porsche Convertible D’s 96.5-inch, 70hp flat four. “But that force has to be transmitted to the ground, converted into forward motion, stopped, turned, controlled—sometimes by persons who don’t fully realize the potential dangers involved,” Thoms said. “The result is that, for all practical purposes a lot of that horsepower becomes excess—an unusable excess.”

Not so “unusable,” it turned out, on the dragstrip. The Corvette ran to 60 mph in 7.8 seconds and through the quarter-mile in 15.7 seconds at 90 mph. The Porsche lagged behind in both tests, taking almost twice as long to reach 60 (15.2 seconds) and through the quarter in 19.9 seconds at 67.5 mph. (One wonders how much more lopsided those results would have been had Thoms instrument-tested the fuelie used for photography instead of the carbureted engine.)

Where the Porsche excelled was when the road got twisty—or so Thoms said. “Match the two cars on a tight mountain road where the Corvette’s torque and acceleration can’t be utilized and you’ll probably get there quicker in the Porsche. It just hangs on better in the turns.” He noted that while both cars were “firmly suspended, as good handling sports cars should be,” the Corvette rode “harshly with a substantial amount of pitch and chop on rough roads. The same routes are gobbled up by the Porsche’s four-wheel-independent suspension, with a minimum amount of shock transmitted to driver and passenger.”

Yet despite the subjective driving impressions, on Riverside Raceway’s 3.3-mile road course, the Corvette was both quicker per lap (2 minutes, 32 seconds vs. the Porsche’s 2 minutes, 47 seconds) and faster (78.5 mph vs. the Porsche’s 71). Thoms preferred the “smoother, faster, and shorter throw” action of the Vette’s four-speed shifter, but felt “the Porsche’s brakes will outlast the Corvette’s.”

The magazine expressed a clear preference for the Porsche’s body construction, calling it a “masterpiece of precision fitting and close tolerances.” The Vette was a “carefully constructed automobile,” but it exhibited “a certain amount of flexing around door jambs, which means a few creaks and groans, apparently congenital in fiberglass construction.”

In terms of fuel economy, the Porsche’s 35 mpg on the highway handily beat the Vette’s 14.6, but the Corvette had an “obvious advantage” when the cars had to be serviced: Porsche’s dealer distribution “will never approach Chevrolet’s.”

Ultimately, the magazine copped out when it came time to pick a favorite, calling both cars “excellent buys” that are “sturdy, reliable, comfortable and, above all, fun to drive.” When pushed to choose, Thoms said the magazine’s staff “became extremely partisan—on both sides of the fence. Feelings were evenly divided except for one nameless male who refused to choose, insisting that he would be happy only with both cars.” Vette

Photos by Bob D'Olivo and courtesy of Petersen Publishing Archives