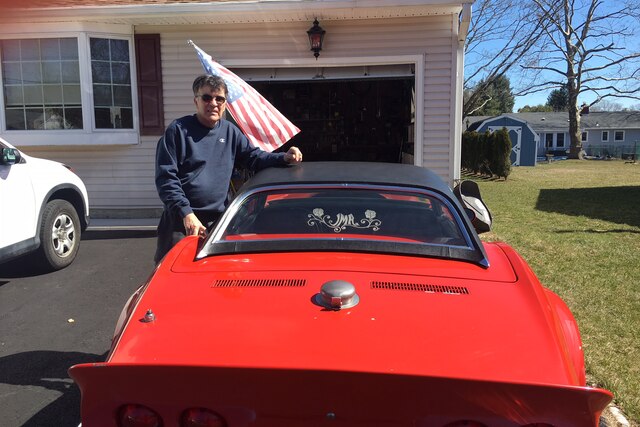 We’ve all heard stories of soldiers that went off to war and in their time overseas dreamed of the car they were going to buy when they returned home, or “state side.”

John Adornetto turned 21 in 1968, the year he got drafted. Living in Jersey City, New Jersey, John didn’t have to travel but 66 miles to get to Fort Dix, where he spent three months in boot camp followed by about the same amount of time in AIT, short for Advanced Infantry Training. The Vietnam War was raging and the Army needed boots on the ground.

“I was stationed in what they called Quang Tri. Don’t ask me how. It was a small station. I was a ‘leg man.’ I was in the infantry.”

Strangely enough, when we asked Adornetto if he and his friends in the Army got together to dream about what car they would buy when they got back home, he said, “No, not really. I was mostly out in the fields and I really didn’t get chummy; chummy with people.”

Adornetto did say, “I always wanted a Corvette, even before I went into the Army.”

Apparently, a Corvette was his dream car. His monthly pay was not much. An Internet search revealed $133.20 for basic monthly pay in 1970 for less than two years of service.

“I got combat pay, overseas pay, plus my Army pay. I sent all that money over to my mom. She saved it for me.”

“I still have the car,” John Adornetto said, while standing in his garage, recently, admiring the ’69 Corvette he bought and modified when he came back from Vietnam in 1971.

When he returned from Vietnam, Adornetto had his arm in a sling from the shrapnel wound.

Adornetto says he “pretty much chromed up” the engine compartment. We agree.

This current photo shows the modified headlights and the big-block-style hood in place.

About a year into his Vietnam experience, Adornetto said, “We went out in the truck in the fields, the truck hit a mine. I just happened to lean over and got sprayed with shrapnel, which went into my shoulder.”

The Army sent Adornetto to a U.S. Army Hospital at Camp Zama in Japan for an operation and to recuperate, and from there to Fort Hamilton, New York, where he got out of the service two weeks early.

“I took a job in the post office. That’s when I met my wife and got married.”

Next up was a Corvette. The year was 1971, and Adornetto had all that money his mom had saved. Oh, to be young with a pocketful of money in 1971 and a thirst for a hot Corvette, like maybe a real Grand Sport or an L88? Adornetto didn’t go shopping or have a specific Corvette in mind. His wife began “talking about her cousin having this Corvette,” a 1969 model, that he ended up buying for $1,300.

John’s daily driver was an older Camaro. The Corvette was his fun car to modify. He installed an Edelbrock manifold, a 650 Holley carburetor, a low-restriction air cleaner, a set of valve covers and side pipes.

“I bought a lot of body parts from Eckler’s Corvette in Florida. I flared out the wheelwells. I had a small scoop in the front, all molded on.”

He replaced the stock rims with Cragars and repainted the flaking white paint with flashy red. John remembers having to drive clear to Long Island for the L88-style hoodscoop. He changed the headlights from folding to fixed. He kept the stock four-speed, but mounted a Hurst T-handle on the shifter.

Most of the time the car stayed in John’s garage at home, and he almost sold his Corvette 30 years ago (for $1,900) when he moved from Jersey City to Freehold, where he lives today.

“It was always running. I never had insurance money and I never had time to register it.”

That’s why a friend told him once, “You’ve had the car 40 years and never even had it on the road yet.”

Adornetto did manage to run the odometer to 58,000 so the car saw some street use. John retired five years ago and has recently put his ’69 Corvette, complete with the old modifications (he did replace the rusting side pipes), back on the road.

This is one vet’s Corvette that didn’t get away. We’d like to hear stories and see photos (especially vintage photos with people and cars) of other Corvettes that vets bought using their pay they saved up. If you have a good story to tell, even if you sold the car (but still have photos) send me an email so I can do an interview with you. Vette

This is a vintage photo of Adornetto with his Corvette back in the day.

John has replaced these side pipes. The Cragar wheels he saved.

The Corvette today appears identical to the way John modified the car in the 1970s, save for replacing corroded side pipes.

In this vintage photo, we can see John changing out the folding headlights.

This vintage photo reveals a couple of modifications: a three-spoke steering wheel and a Hurst T-handle shifter.

John said, “I sent it out to Renko and they took the convertible top off and put another a woodgrain top to it - black.”

John Adornetto stands in the driveway of his home today in Freehold, New Jersey, with the Corvette he bought when he returned from Vietnam.