A pair of derelict C1s wows the crowd in Carlisle 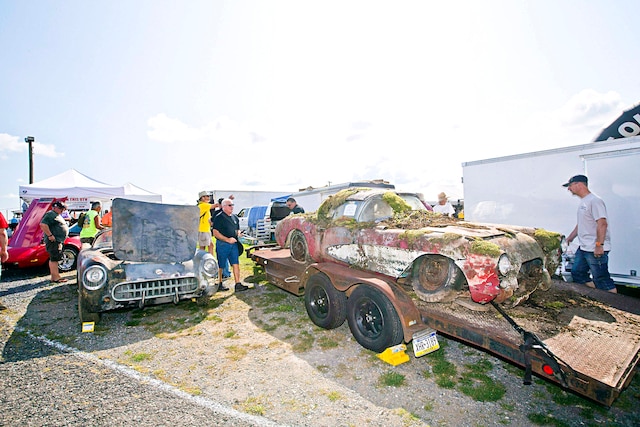 When Kim Walker towed two old C1s to the 2017 Corvettes at Carlisle show to sell, he had no idea that they would be one of the highlights of the four-day event. With a multi-million dollar display of rare 1967 L88 Corvettes in Building T, he was pleasantly surprised to find these two old cars giving the mega-bucks examples a run for their money in popularity with the fans attending the show. When we set eyes on these two cars, we figured there was a story that needed to be shared behind this much patina, so we gave Walker a call.

We knew from some of the literature that was with the cars that they were both from Pennsylvania. Walker told us that they had been sitting just outside of Muncy, Pennsylvania, on the owner’s property for many years, and he personally knew about them for about 15 years. Walker explains, “Every Corvette guy in the county knew about these cars and the owner had been approached several times.” After many purchase attempts over the years, the transaction was eventually consummated with the aid of a third party, and was actually part of a larger three-car deal that also involved an equally sad ’60 Corvette, also owned by the same individual.

We started off by asking him about the ’56. He told us that it was purchased in 1957 by the original owner, and was used as daily transportation until 1972. It still wears the original Venetian Red with Polo White exterior paint and beige interior. It is equipped with a three-speed manual and a 265-cubic-inch engine. Walker doesn’t know which of the three engine options lay under the hood because he didn’t want to open it, which meant removing all the vegetation growing on it. That was part of the appeal when it was displayed. His wife watered the car every day before the show so that none of it died off. The front of the car has a modified opening, which he told us, was done by the owner who liked to dabble with mild customizing. It was parked at some point in 1972, next to his garage where it slowly sank into the ground until early August 2017.

The story on the ’54 is that it was acquired in 1964 and was parked the following year. It originally rolled off the St. Louis assembly line sporting a Polo White exterior and Sportsman Red interior, along with a 235-cubic-inch inline-six mated to a two-speed Powerglide transmission. The odometer shows just over 68,000 miles. Walker noted that the owner pulled the engine and transmission out for a full rebuild in 1965. The body was also completely disassembled at that time, and some minor bodywork performed on it. The guy lost interest in the project and it just sat inside the garage until 2013, when it was moved outside and parked in a carport. When Walker acquired it, it was completely apart. He didn’t want to sell it in an “as is” condition; so many hours were spent carefully putting it back together so as not to disrupt the patina on the car.

Two eager individuals purchased both cars. The ’56 was sold early on Thursday, the first day of the show, and we were told it fetched a cool $10,000. The ’54 was sold on Saturday, with a selling price in the mid-$20s. While the future of the ’56 is unclear, it may end up as a flowerpot a bit longer. Plans are for it to be on display during the 2017 Fall Carlisle show, while the ’54 will undergo a full restoration. Vette

Shown together at the 2017 Corvettes at Carlisle show, these two legit barn find C1s were a hit at the show.

The ’56 was purchased in 1957 by the original owner and was used as daily transportation until 1972, at which time he parked it outside his barn.

Still wearing its original Venetian Red paint with Polo White coves, this Corvette illustrates what shifting weather conditions will do to a fiberglass body when left outside for decades.

This is the result of decades of neglect. Mechanically, this car was a question mark while the condition of the body left very little to the imagination.

The questionable radiator opening on this Corvette was the result of the owner’s attempt at mild customizing.

In an effort to maintain both cars in the as-found state as much as possible, the doors on the 1956 were never opened to see the full extent of the interior damage.

Studded snow tires in Pennsylvania were a common sight, even on a Corvette. These seem to have served their purpose at some point in time.

The original owner, as a precursor to his planned customizing attempt, removed some of the missing trim on the ’56.

The collapsed rear exhaust and damaged fiberglass demonstrate both the actual condition of the fiberglass and metal parts throughout the car. The exhaust seems to have rusted away over the years with its remains still in place.

The rear taillights, like the rest of the car, look to be too heavily damaged to be useable.

The vegetation on these cars was watered daily prior to the show to keep it alive for display purposes.

The collapsed front suspension probably tells part of the story on this car and its actual condition. With the frame buried in the dirt for decades, the chances are that it is unusable.

Much of the body on the ’56 was covered with vegetation and moss. Based on what was visible, it was very difficult to ascertain just how much of this car was actually useable.

As a result of it sitting outside exposed, the interior was extremely weathered and in worse shape than the one in the ’54.

This was the resting spot for the 156 since 1972. The vegetation grew around, and on the car over the years to the point where it was only partially visible from the road.

After decades in the same spot, this was the moment when it was literally dragged onto the flatbed. Note the vegetation pieces hanging from the front that eventually fell off.

Part of the moving process onto the flatbed also included taking all the growth that was on the car. This was going to be part of the Carlisle display.

Loaded and ready for the trip to its new home.

Originally painted Polo White with a Sportsman Red interior, the ’54 was parked in 1965 when the owner stripped it down to the fiberglass gel coat.

With the body stripped down and minor bodywork performed on it, we’re not quite sure what the goal was. Since it was stored indoors until 2013, it was in much better shape than the ’56.

Dated June 4, 1965, this was the last time the ’54 was inspected. It was parked one year after the original owner purchased it.

The 235ci inline-six was removed in 1965 and treated to a full rebuild. It was only put back in the car prior to the unveiling at Carlisle.

In an effort to preserve as much of the patina on the car, great care was taken when putting the engine back in the car.

The ’54’s dash looked to be fairly intact and in decent condition, with the odometer only showing a bit over 68,000 miles.

Judging by the handiwork shown, we’re pretty certain that the original owner was in way over his head when it came to work with anything made out of fiberglass.

Originally equipped with a Sportsman Red interior, it was replaced with a black one prior to it being parked. No information was available as to when it had been swapped.

Rated at 150 horses, the 235ci engine was supposedly rebuilt at some point. Judging by the quality of the bodywork performed, the rebuild claim didn’t inspire any confidence.

OBO was the final selling price. We were told that it was sold for close to the asking price. It went for an undisclosed amount in the mid 20s.

This 1954 Chevrolet Corvette gets its inspiration from little bit of everything: part restoration, part prototype and part restomod.