Fitting Tribute: 12 years in the making, 502 cubes, four doors, and completed in honor of a fallen friend—this ’57 Bel Air is a rolling work of art 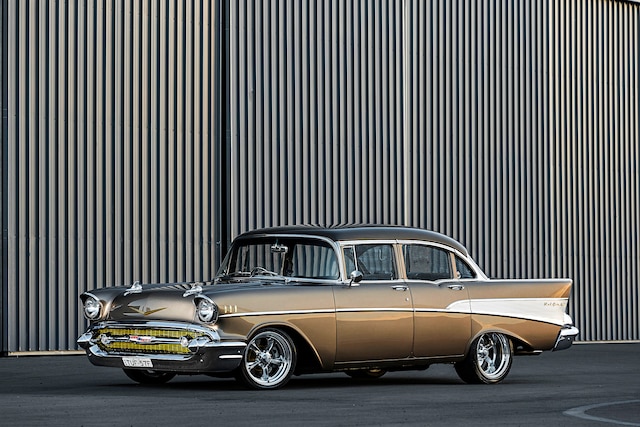 It takes some serious cojones to drop over $16,000 on a car you’ve never even seen. But that’s exactly what Australian Brian Green did when he purchased this ’57 Bel Air some 12 years ago as the basis for a project build.

Luckily for Brian, when the car arrived at his home base near Wollongong, New South Wales, Australia (about 90 minutes south of Sydney), the car was in pretty good shape with only a little rust to contend with. “The ’57 had been in the country for a month, delivered from South Africa,” Brian says. “It could drive, but you wouldn’t have driven it very far. I got it home and began the teardown.”

Once Brian had the car stripped down to swinging panels, he says he treated the project like a big model kit and all that was retained was the original shell and interior. Some six years went by while Brian—a fitter and turner by trader—went about rebuilding the sedan, replacing the powertrain, driveline, and just about everything else in his garage before successfully getting it engineered and registered.

“I drove the car like that (still in its original cream and white paint) for two years while I ironed out some issues with overheating and brake quality,” he says. “I was also hassling my old school mate Tony Roberts about opening his own paint and panel shop. I didn’t trust anyone else to paint my car.”

It took Brian some nine years to convince Tony Roberts, then a paint sales rep, to quit his job and open Cool Ride Refinishing together with partner Daniel Baker. As far as Brian is concerned, the pair went about creating “a work of art” out of his ’57.

The team began by stripping the car back down to the bare ’rails and blasting everything, before repairing any rust. Daniel then re-lead wiped the rear end, tidied up the floorpan and chassis ’rails, and neatened up all the door gaps. A lot of attention was also paid to the front end, with significant changes to the radiator support and front panels.

“Daniel created a support bar that holds the front end panels together instead of the radiator support,” Brian says. “This travels underneath the guards and is mounted to the front of the crossmember. Then the radiator support was custom fabricated to house the radiator forward of the Billet Specialties serpentine belt system and dual 14-inch Aussie Desert cooling fans.”

With the repair and custom work complete, it was time to choose a color and Tony created four different custom mixes based on what Brian and his wife had said they liked. “We selected two of the Sikkens colors and they were only two tones away from one another,” he says. “We named them MAAD Mocha and Magic Mushroom.”

Brian laughs when he explains how they came up with the name Magic Mushroom. “Tony said the color ‘bent off its head’ in the sun,” Brian recalled. And indeed it does. Depending on the intensity, angle, or time of day, the body color can look anywhere from silver to gold to bronze.

The Mocha color made it onto the roof, as well as spilling into the cabin where it covers the dash and exposed sections of the doorjambs. Magic Mushroom covers the exterior and the smooth engine bay—which contains the neatly dressed 535hp/751–lb-ft ZZ502 Chevrolet Performance big-block crate engine. The TH400 trans is controlled by a Lokar shifter and sends power back to the narrowed 9-inch Moser rear with 3.89 gears and a Detroit Locker. Brian estimates some 2,000 hours were spent on getting the bodywork to where it is today.

If the top side wasn’t enough to impress, while the car was on the rotisserie Brian had Tony coat the smoothed floorpan and numerous suspension and engine components in the same body color. The chassis and driveline were coated in a contrasting satin black.

Things went so well at Cool Ride that Tony’s wife contacted Brian to let him know that Tony was becoming a little too enamored with the ’57. “Michelle rang me and said, ‘Brian, if you don’t come and get your car soon, you won’t get it back’,” he laughs. “So I got it onto a truck and hauled it home and started the 12-month process of rebuilding it into a drivable car again.”

When it came to the interior of the ’57, Brian got out his pencils and committed his vision to paper, which he then emailed to the crew at Ciadella Interiors in Tempe, Arizona, who turned his vision into reality. “They reproduced the beautiful fabrics of the original cloud patterns into the custom bench and door trims. It’s a one-off design that goes killer with the painted interior.”

While the reassembly process should have been a time of excitement and accomplishment, it became a time of mourning when Tony was killed in a motorcycle accident on the way home from work. “I was devastated,” Brian says. “Plus, I now had to finish the car without scratching it as there was no one who knew the paint specs. I still don’t; they were in the computer next to his booth, and the shop has since shut.”

Brian continued, “I now was on a mission to get the ’57 ready for Summernats 30 as it was a goal for us all to get the car out there to be seen.” Two-inch drop spindles got the stance right while Pedders shocks helped tame the body roll. A Flaming River column coupled to an HT Holden Monaro steering box aids in directional control while Camaro brakes were added to slow the four-door down. The Chevy rolls on 17x7 front and 17x10 rear Boyd Coddington Smoothie wheels wrapped in Falken Ziex rubber. To make sure the Tri-Five was trouble free it received a full wiring kit from Painless Performance. With a lot of long hours, the Chevy was ready for the big event.

“The judging at the show was first, getting some great feedback. Then there was the wait until Friday afternoon and seeing my entrant number on the sheet outside the judging hall. It was overwhelming—we made it into the Top 60 Elite Hall!”

Over the next few days, Brian got to talk to scores of people about the ’57 and all the work that he, Tony, and Daniel had put into it. On average, more than 110,000 people visit Summernats each year, with a trip through the Elite Hall on everyone’s itinerary. Even Charlie Hutton stopped to talk to Brian about the bodywork, even signing the custom radiator support panel.

When the ’Nats were over, Brian jumped in and drove the ’57 back home—a trip of some 155 miles. “I drove it home from Canberra, living the dream in a brand-new, 2016-built 1957 Chevy Bel Air,” he says. “It’s driven whenever possible—even to pick up the pizzas.”

It may have taken 12 years to complete, including plenty of late nights on his back on cold concrete in the shed at home, but Brian wouldn’t change a thing now that it’s done. “I’d like to thank my wife and kids Lareesa, Keelan, and Paityn for the support and giving me the confidence to take on the rebuild; Cool Ride’s Tony and Dan for the wicked paint and panel work; Ciadella Interiors for bringing my drawn design to life; Fruity for the sandblasting and painting of the exhaust system; and my close mates ‘Kit Kat’ Kev and Hill Pickle for sharing my appreciation of cars since we were first year apprentices.” We’re pretty sure Tony would approve how the ’57 came out in the end.