This Custom 1966 Box Nova built to move out!

Mama Said, “Knock Me Out”! Build Me a Badass Box Nova, She Demanded. The Guys Delivered 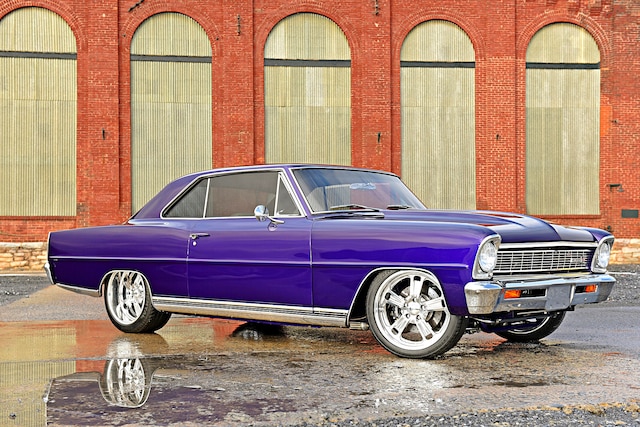 Chevy lover Mitchell Laucks had every intentions of building a radical street/strip ’66 Nova with the help of his hot rod lovin’ father, Bruce. They even went as far as locating a sweet starting point for the build, which the twosome dug out of long-term hibernation and then towed back home to their garage in Fredericksburg, Pennsylvania. But their plans changed dramatically when Mitchell’s mom, Lisa, got an eyeful of this needy Chevy compact. She saw the potential for her own brazen, hot-rodded muscle ride hiding deep down inside the beat-down Box Nova.

“This one’s gonna be mine … right boys?” She firmly asked, adding that “it’s not really a question” inflection on top of it. Mitchell and Bruce were stone silent. With that query the father/son team knew that they were in big trouble. Neither answering yes nor no here would ever work in their favor when dealing with Mama Laucks. They both now had to face the fact that they just might have just lost their new toy to the queen of the household.

But hey, all was not lost … yet. You gotta look at the bright side here. Even though Mama “poached” the Nova for herself, the Chevy was still in their house. And who knows … the boys might just be just a “pretty please” away from getting the keys, and the chance to drive her new hot rod. You’d figure that was a definite possibility, especially since Mitchell and Bruce were going to do all the labor on her new “super car” anyway. So the threesome joined together, battened down, and came up with a bulletproof plan to take this basic Box Nova and turn it into a Chevy that rocks.

The Nova was found in Manheim, Pennsylvania, not far from their home. It was a little less than a complete car. “It was missing the whole front end, but we didn’t need that stuff anyway,” states Mitchell. And that’s the truth, since the plan was to make this ride into a wild custom with power to spare and not some meticulous 100-point OEM restoration.

When they checked out the Nova before purchasing, Mitchell used a magnet to scan the panels. Their “high tech” imaging system showed that the car was pretty much rust free. Good deal they thought. However, once the car was stripped they found that newer metal was welded right over the old rusty panels. The last “sheetmetal technicians” didn’t even try to remove them at all. Mitchell realizes now that he might have to upgrade his rust analyzing equipment. So the boys were behind the eight ball from the start. But that didn’t deter them at all, as they knew Mama was expecting this ride to be the hottest Chevy compact this side of the Mighty Muddy Mississippi.

So Mitchell and Bruce soon found themselves elbows deep in a near total restoration of the Nova’s sheetmetal. The job included replacing the roof skin, the quarter-panels, a complete set of floors (including the trunk), sourcing a new cowl-induction hood, and, to top it off, welding a myriad of patches throughout the body. It seems like the rust was the only thing holding this little Chevy together. But they forged on.

When they made their way to the front end, a Martz Chassis bolt-on front clip was purchased and installed, which brought a major improvement to the overall strength and look of the semi-unibody construction. Once the front end was set up, the boys continued with the theme by adding a Martz Chassis bolt-in rear suspension with a four-link setup, and installed a healthy Ford 9-inch rear. Homemade round tube subframe connectors were fabricated in house and used to tie the chassis and body all together. Before moving on, the rear wheelwells were mini-tubbed in preparation for some big meats.

Soon the boys had to start thinking about what powerplant would propel this rocket ship down the strip for Mama, or whomever else that could wrestle the keys out of her hands for a drive. “First thought was to build a traditional small-block, but dad thought the Chevrolet Performance LSA would be badass,” says Mitchell. Well guess what? Father knows best, and so the duo bought a Connect & Cruise LSA engine package complete with a 4L85E transmission.

The insertion into the Nova engine bay was way easy, but packaging the engine cleanly was the real trick here. The duo spent plenty of time cleaning up plumbing, wiring, and hiding intercooler hoses. The latter being run through the firewall, under the dash, and under the fender to the tank and heat exchanger in the front of the engine bay. They added a Cadillac CTS engine cover for an offbeat modern touch. Church Boys headers remove the spent gasses and send them through a pair of DynoMax Ultra Flo mufflers.

The differential is stuffed with 3.70 gears, which spin the big rubber out back. To get this ride down the road, 18x10 Budnik Shotgun G wheels shod in 285/35/18 Continental tires do the damage. Up front, 18x7 rims wrapped in 215/45/18 skins keep this ride pointed in the right direction. Wilwood disc brakes, with 12-inch rotors up front and 11-inch in the rear work with a Wilwood master and booster to do the stopping on this wild Chevy.

Mitchell did all the finish bodywork and prep himself. When it came to the paint, he did that, too. He sprayed the DuPont Hot Hues Purple Rhapsody on the Nova’s flanks right there in the family garage. “When Mama picked this color, my dad and I tried to convince her to try something else, but we lost out. But now we realize how awesome the color is,” he gladly states. Good job Mama, you did well. The car’s color and finish are judged to be an undisputed knock out in our book.

Mitchell wanted the underside of this Nova to be as nice as the top side, so he made sure that he gave the belly a little love as well. He sprayed the undercarriage with SEM bed liner tinted to match the Chevy’s new body color. To finish off the chassis, he skinned all the suspension parts in Sterling Gray metallic, and then gave them a few coats of satin clear to give them some extra toughness.

The interior was next on the list. Mama made her demands and the boys carried them out to perfection. First off, a Dakota Digital dash was installed for a more modern look at the vitals. To take control of the climate in this fast but comfy Chevy, Dakota Digital HVAC controls were used in conjunction with the Vintage Air A/C system. When it came to the overall look and feel of the Nova’s new cockpit, well, that was left up to Chris McClintock and Corey Lyba over at Bux Customs in Pottstown, Pennsylvania. “These two guys really made the car what it is and totally blew my expectations out of the water,” states Mitchell. They pieced together one beautiful interior, using black and gray leather to accent the wild purple paint, while repurposing buckets out of a ’11 Buick Regal. Overall, the results are just stunning to say the least.

Mitchell and Bruce finished off the car, adding the subtle touches that are rarely noticed, but important nonetheless. Stainless steel brake and fuel lines were plumbed in, and a stainless Rick’s Hot Rod Shop gas tank was added as well. This choice ride sends go juice by way of a CTS-V fuel pump out back. Billet hood hinges add some bling under the hood.

After four years of hard labor, the car was finally ready for testing and tuning. The twosome racked up many hours on the Nova, with Mitchell working 2-3 hours on it every day after doing his regular 12-14 hour shift. When the car was finished, they had Dennis Wheet troubleshoot, fix some minor issues, and then tune the car. They were quite happy with the 500 rear-wheel-horsepower that the LSA made. And Mama ... well, she was downright giddy.

Today, the Nova sees plenty of road time. And yes, Mama has been good to the guys, letting them partake in the fun whenever they like. “I built this car, and I drive this car often,” states Mitchell. So don’t feel sorry for them because they lost this one to the queen. There’s always another one for the taking, and maybe Mama will let the guys keep the next one. Maybe.