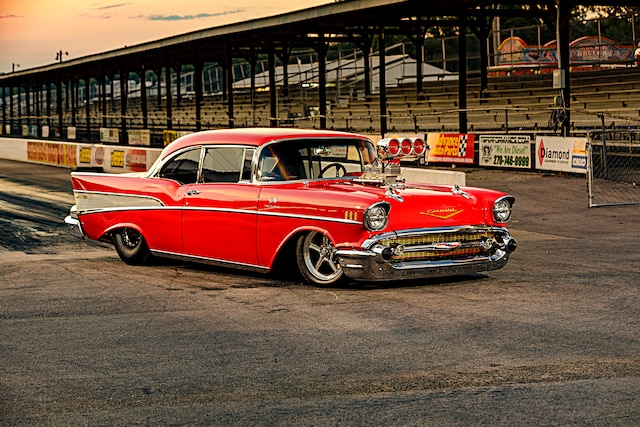 Pro Street is as much an effort in speed as it is in style. It’s an in-your-face mashup of monster engines, massive tires, and a not-so-subtle look that proclaims, “MOVE!” The style began in the ’80s, and not as a fashion statement but with the top racing tech of the time—Pro Stock—only repurposed for the road. Big horsepower begets bigger tires, and that was simply how it was done. As the craze spread and evolved, it took on a new life with vibrant paint schemes and too-big-is-just-right powertrains. Nitrous, turbos, and blowers were all welcome ... sometimes in tandem.

While much of the muscle car world has shifted to big wheels, taught tires, and top-of-the-line suspensions, there are still a select few that favor the king-of-the-road royalty that is any Pro Street car. Among them are Denny Terzich Sr. and his son Denny Terzich Jr.

“I’ve always liked Pro Street,” said Terzich Sr. “A couple years back everybody was saying Pro Street’s dead, but I go to shows and cruises and it’s coming back.” “My dad’s always loved it,” said Terzich Jr. “I do, too, but he’s just a fanatic about it.”

The Terzich family has had a few traditional Pro Street cars, but the ’57 you see before you is something a little different. “This is the one,” said Terzich Sr. “The ’57 Bel Air is just one of those cars that never goes out of style. It’s a dynamite car that everyone loves. It’s the ultimate Pro Street car.”

It was at the second annual Tri-Five Nationals in Bowling Green, Kentucky, that Terzich Sr. first saw the car. It was love at first sight. “[My dad] really fell in love with the car,” said Terzich Jr. “I told him, If you want it, get it. We’ll put our touches on it and make it a pretty badass Pro Street car.”

Terzich Sr. pulled the trigger, buying the ’57 from its then-current owner in Texas. As it was, the car already had quite the racing pedigree. Originally owned by Tommy O’Donnell, the ’57 competed in Drag Week 2012 and momentarily won the Internet with its sky-high, wheelstanding performances. At that point, it was a stripped-down, tube frame racer walking the line of street legality and human discomfort. The latter would soon change.

Being the guys behind ProRides, the Terzich boys are no strangers to speed. They originally built Sick Seconds, the street-legal, Pro Mod-esque Camaro now owned by Tom Bailey. The ’57 was to be a build of a different flavor, equally bad-to-the-bone but with driveability at the forefront. “My dad wanted to take the car from its lineage as a drag car and make it more street oriented,” said Terzich Jr. “My dad wanted to be able to cruise it, drive to the grocery store, whatever.”

Starting with a tube frame racer was a blessing in a few ways. Being mostly new steel construction, the car had none of the typical Tri-Five rust and there wasn’t much to gut from the interior ... because it had none. Terzich and Sinister Muscle Cars blew apart the mechanical bits, thoroughly modernizing them while adding a full interior from Trick Labs to the utilitarian driver’s compartment.

Billet Specialties Street Lite wheels; appropriately sized at 17x4.5 front and 15x15 rear, a new engine, a Rossler Pro Mod transmission, and a comfy interior complete with Dakota digital gauges were all part of the mix.

“We did a whole new motor, blower, transmission, wheels/tires, and even upholstery,” said Terzich Jr. “It was a lot of modern updates. It’s also got a Gear Vendors overdrive, which we run on all of our Drag Week cars. They’re bulletproof!”

The powerplant is a signature element of the Pro Street style, and at the heart of the ’57 is an all-aluminum mill that does not disappoint. A Brodix block houses Diamond pistons, Callies connecting rods, and a stroker crankshaft, which combine to yield 540 cubic inches of big-block Chevy. Under the valve covers, a custom Bullet solid roller camshaft bumps Jesel lifters and rockers, with the whole assembly kept in time by a Jesel beltdrive.

Topping the 500-plus-cubic-incher is the perfect horsepower-producing Pro Street accoutrement: a Weiand 8-71 supercharger. Boost is set at 10 psi via an arrangement of overdrive pulleys. Horsepower comes in at an earth-moving 1,500.

Induction duties are a blend of old and new. A Hilborn Big-And-Ugly injection hat supplies gargantuan gulps of air while 16 electronic injectors and twin Holley electric fuel pumps are controlled by a capable Holley Dominator ECU. “We built the engine with more compression than your usual blower motor, around 11:1, and ran a little less boost on the blower,” said Terzich Jr. “That way the engine makes massive power and isn’t lazy down low like a typical low-compression blower motor.”

Fifteen-hundred horsepower sounds intimidating, but the ’57 is equally up to the tasks of replenishing refrigerator stock as clicking off single-digit e.t.’s at the local track. “As obnoxious as it looks, it’s really a street car,” said Terzich Jr.. “[Dad] takes it to cruises and to the grocery store. Once in a while we’ll go out and race it.”

On the exterior, the wheels and Mickey Thompson SR Radial tires complete the look, but a host of custom touches set the ’57 apart from a sea of other Pro Street rides. The body is 100 percent steel, and the hood is a ProRides special, steel lift off. It’s designed to pull off in under 30 seconds and sits snuggly and stylishly tight to the injectors. “[Jr.’s] got a good eye and he kind of guides me on these builds,” said Terzich Sr.

The apple doesn’t fall far from the tree and Terzich Jr. also has a penchant—and talent–—for Tri-Fives. His most recent build, X-BOX, was a thoroughly modernized ’55 Chevy and Hot Rod cover car.

“Modern builds, like X-BOX, are more my flavor,” said Terzich Jr. “We just had [X-BOX and the ’57] together down at [Pittsburgh] Autorama. It was cool seeing two totally different style Shoeboxes, one so futuristic and one a hardcore Pro Street, next to each other.”

To sum it up, the ’57 is loud, authoritative, a bona fide driver, and a car that is unlikely to be duplicated. “It’s just fun,” said Terzich Sr. “I enjoy the horsepower and the rumpy sound of the nasty camshaft.” If people don’t look when you drive down the street, it’s not a Pro Street.