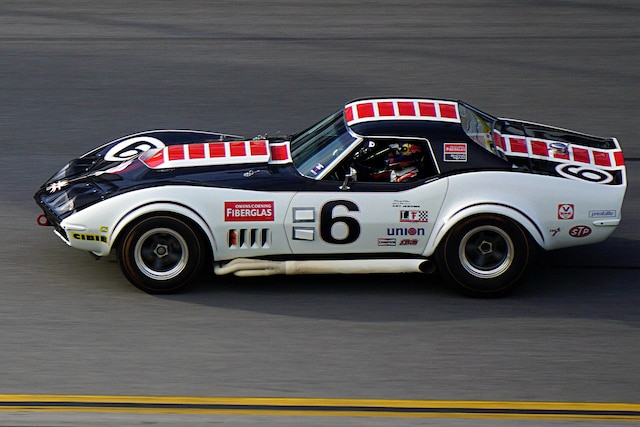 Fabulous Restorations, located in Fort Lauderdale, Florida, specializes in Corvette and muscle car restorations. Owner George Haddad started the business in 1974 after moving from Detroit to Florida. Even though his company works on a wide variety of high-performance muscle cars, George is passionate about Corvettes. If he had to pick a favorite year and option it would be the 1967-’69 L88 and ZL1 Corvettes. As the prices continue to escalate, George used his Corvette expertise to build replicas of his favorite L88 and ZL1 Corvettes.

His first L88 replica, a 1967 Rally Red roadster was built for a customer. This replica pays tribute to the L88 roadster that Cliff Gottlob and Jack Blatchford finished 11th overall with at the 1970 24 Hours of Daytona. Red was chosen as the color to confirm that this is not the same Daytona car. The original white roadster is part of the Dana Mecum/David Burroughs collection. The Rally Red replica L88 is correct in every way except for the color.

The next Corvette replica George’s company built included a copy of an ultra-rare all-aluminum ZL1 engine. Only two are known to have been delivered to customers and both are in private collections. The ZL1 option package cost $5,267.15, which was added to the price of the base Corvette. So, if no other options were ordered, the out-the-door price for a ZL1-equipped Vette was $10,048.15. George’s Le Mans Blue coupe is a hit with Corvette fans whenever it appears at a Corvette event.

The positive reaction to the Fabulous Restoration finished work gave George the desire to build another significant L88. He began researching the Owens Corning Fiberglass (OCF) L88 racing team and learned they raced two Corvettes from 1968-’71. One of the L88s was a “mongrel” built in late 1967 from “GM Service Parts” and the second was a factory fresh “open chamber” 1969 L88 bought by the team at the end of 1968. The two team drivers had deep GM roots. Tony DeLorenzo (son of Anthony G. DeLorenzo, GM VP of Public Relations) and Jerry Thompson (GM Engine Development Test Engineer) were able to gain access to the latest Corvette racing parts. The numerous GM engineers and the availability of the latest service parts helped them assemble a well-respected Corvette racing team. They needed a major sponsor so they spoke with Dolly Cole (wife of GM President Ed Cole) about their funding requirements. Dolly contacted Owens Corning Board Chairman Curtis LeMay (Retired Air Force General) for sponsorship assistance and LeMay agreed.

NCM Hall of Fame member Randy Wittine designed this black and white paint scheme for the Owens Corning Corvette when it competed at the 1970 24 Hours of Daytona. The crew is making last minute adjustments before the race. Driver Tony DeLorenzo, in the red shirt, looks on.

GM stylist Randy Wittine designed the Owens Corning paint schemes and the team won 22 straight A/Production SCCA (Sports Car Club of America) races from May 1969 to November 1970 with drivers Thompson and DeLorenzo. The team also accrued numerous FIA GT class victories with the same two Corvettes at Daytona and Sebring. Due to corporate budget cuts, the Owens Corning sponsorship ended after the team’s L88 finished 4th overall and first in GT at the 1971 24 Hours of Daytona. At the end of the 1971 season the ’68 mongrel was sold to SCCA racer Jerry Hansen and the ’69 L88 was sold to Bobby Rinzler. DeLorenzo says, “We loved the Corvettes, but it was time for us to move on.” Today, Rick Hendricks owns the mongrel Service Parts roadster that was restored as it raced in the FIA races. Collector Harry Yeaggy purchased the OCF L88 that was restored to look exactly the way it appeared as an SCCA A/Production open top roadster. Both of these original team cars reside in their respective collections.

During George Haddad’s OCF research, he discovered that stylist Randy Wittine designed a Black/White/Red livery for the 1970 24 Hours of Daytona. The team only ran it once, because the OCF marketing department demanded the team return to their original colors. George decided to build his replica using this rare paint scheme. He contacted Randy Wittine for assistance and Randy agreed to help him with duplicating the paint on his L88 OCF project. George and the Fabulous Restoration team spent many hours constructing this replica 1969 L88. They used body and frame parts that were in the shop’s storeroom. Hard to find N.O.S. L88 service parts were located after a nationwide vendor search. The paint scheme was exactly as Randy drew it in late 1969. In addition, Randy even drew the pinstriping for George to follow that appeared on the car at the 1970 race. The end result was stunning.

Jerry Thompson and John Mahler qualified the No 7 Corvette 11th overall and 1st in the GT category. The team went on to finish 6th overall, 1st in GT.

George felt the best way to unveil his replica was to take it to Daytona International Speedway and get photos of it lapping, like the original did in 1970. George contacted vintage Corvette expert Jan Hyde (www.registryofcorvetteracecars.com) for his advice. Jan recommended that George test the Corvette at the 2017 HSR (Historic Sports Car) Classic 24 Hour and Daytona Classic (www.hsrrace.com). George agreed and submitted his entry to the event. One final wrinkle, George needed a driver. He asked his friend and racing legend Dieter Quester if he would test the Corvette at Daytona and Dieter agreed. Next, he invited Randy Wittine, Gib Hufstader and Jan Hyde to join them at the Daytona event and they gladly accepted. The test was a success. Everyone associated with the project, including Wittine, Hufstader, Hyde and Haddad were a little misty eyed when the L88 was safely back in its trailer. The Fabulous Restoration team brought to life this amazing L88 replica that is a tribute to the historic winning Owens Corning Corvette team. Vette
5/22

The L88 replica in this story was patterned after this No. 6 Owens Corning Corvette. A right rear wheel failure caused major body damage during the race. Driver Tony DeLorenzo repaired the car on the circuit and returned it to the pits. The crew made further repairs and drivers Tony DeLorenzo and Dick Lang finished 14th overall.

In 1971, the Owens Corning L88 returned to the 24 Hours of Daytona with a new Randy Wittine paint scheme and finished 4th overall and 1st in GT. The team’s Owens Corning sponsorship ended after this race and both Corvettes were sold at the end of the season.

Fabulous Restorations first replica was this 1967 L88 Rally Red roadster. It was patterned after the Cliff Gottlob/Jack Blatchford white L88 roadster that raced at Daytona in 1970. George did not want to duplicate that original, restored L88 so he painted his replica Rally Red.

This is a replica of a 1969 Corvette ZL1 that includes an all-aluminum 42ci engine. This was the second Corvette replica Fabulous Restorations completed.

The Owens Corning 1969 Corvette L88 replica is shown under construction in the Fabulous Restoration facility in Fort Lauderdale, Florida. Donor parts from past Fabulous Corvette projects were used to assemble the body and frame. Rare L88 parts were located and purchased from sources around the country to complete this project.

The construction is almost complete and the attention to detail can be seen on the underside of the Owens Corning replica Corvette as well as the immaculate bodywork up top. Heavy-duty L88 parts were used throughout this project, including the J56 Heavy Duty Brake option. These dual pin calipers can be seen in this photo.

Fabulous Restoration owner George Haddad backs his replica Owens Corning L88 out of his trailer at Daytona International Speedway. George was participating in the 2017 HSR Classic 24 Hour and Daytona Historic event with his Corvette.

The stock factory interior was modified to accept racing gauges and racing switches. Full rollcages were not mandatory until the early ’70s, which is why this replica is not fitted with one.

The Owens Corning Fiberglass Company was the L88 team’s primary sponsor from 1969 to early 1971. During that time the team won numerous races and multiple sports car championships with their two team L88 Corvettes.

Car owner George Haddad looks on as NCM Hall of Fame member Gib Hufstader makes an adjustment to the steering box on the Corvette. Yes, teams did use hammers on Corvettes in those days. Gib served as a Design Release Engineer for Zora Arkus-Duntov and still races his own L88-powered roadster in vintage events.

George Haddad is driving the L88 to the technical inspection area. The Corvette had to pass the Historic Sports Car organization’s scrutiny prior to it being allowed to enter the Daytona circuit.

The Corvette passed its examination and vintage race car driver Dieter Quester was asked to shake the Corvette down at Daytona. Dieter is shown entering the pit area that led to the track entrance at Turn one.

This close-up view of the L88 Corvette replica shows off the quality of the paint and Owens Corning livery.

The Daytona International Speedway start/finish line can be seen in the upper right hand corner of the photo as Dieter Quester wheels the L88 onto pit lane.

Dieter completed his test in the replica L88 and headed back to the garage area. The Corvette performed well for its first outing. We are not sure if it will participate in future races, but it looked awesome on the high banks of Daytona.

NCM Hall of Fame members Randy Wittine (left) and Gib Hufstader were involved with the Owens Corning Corvette Team from 1968 to 1971. Randy was a GM stylist, but he was also an Owens Corning team member who designed the team’s paint schemes. Gib was a Design Release Engineer for Zora Arkus-Duntov. In this capacity Gib made sure the L88 race teams received the correct parts to win races. Both attended Daytona to support the unveiling of this stunning L88 replica.