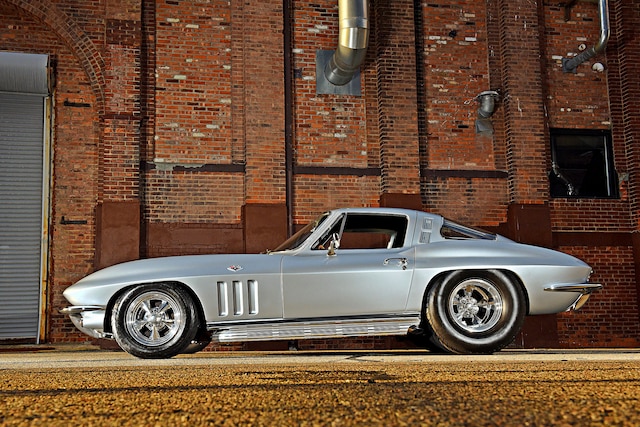 New Jersey lawyer Harley Breite has a ragin’ GM obsession he just can’t shake. From his first ride—a used ’74 Firebird—until today, the lure of a hot General Motors ride in his driveway has been an itch he has steadily scratched since he’s had a driver’s license stuffed in his wallet. So it was only natural that when the time was right, Harley got a top-shelf muscle Corvette to call his own.

After seeing some of “customizer extraordinaire” Jason Pratt’s handiwork, Breite decided that Jason would handle the duties of bringing some of his “car-nal” visions together and fabricate them into one hairy C2 ride. Pratt operates both JE Pro Streets (with his father Ed “Fast Eddie” Pratt) and Yeti Motorsports (along with partner John Visner) out of their extensive shop in Massillon, Ohio. There, the crews build topnotch Pro Street-styled, high-horsepower muscle rides for clients all across the U.S. JE and Yeti don’t do anything halfway; their rides are all wild, big-power rides, which on many occasions sport some kind of jumbo power-adder protruding through the hood.

It was actually Pratt’s idea to do a radical Pro Street Corvette, as Chevy’s plastic sports car wasn’t always tops on Breite’s list of things to build. But he went along with Pratt’s idea that this particular car would not only be an awe-inspiring project that would turn heads, but a ride that he would enjoy running all-out on the local streets back home in northern New Jersey. So Breite had a one-on-one chat with Pratt and came up with a foolproof game plan to bring a restomod 1963-styled C2 to fruition.

Now, this wasn’t the first time these two had come together on a project. Currently, Breite has three other cars with Jason’s signature on them. One is a Pro Street Nova with a 632ci engine pushed with a 10-71 blower up top. It’s running at over 1,100 bhp at the moment, without hitting the bottle. Number two is a Pro Street ’67 Chevelle with an aluminum 572 and a six-speed transmission, and will handle everyday driving duties. Last on the list is a ’73 Trans Am replica, built from a Firebird and running a basic 350/TH400 setup.

So, the starting point for this ride turns out to be not a ’63 but a ’65, built up with a split-window kit to create the signature look of the one-year-only model. Breite loves the overall design of the 1965 body ... and well, just couldn’t look past getting that double window out back. From there they added a stinger hood to achieve the overall C2 design that Breite desired.

Once the aesthetics were in place, Pratt took over and did his magic. The chassis was stripped down and built up at JE. It features a 2x3 back-half along with a custom chromoly four-link wishbone suspension, tubular upper and lower control arms and a QA1 adjustable coilover kit. Wilwood Pro Series four-wheel disc brakes that have been cross-drilled and slotted handle the stopping duties. A Flaming River power rack-and-pinion along with a tilt-steering column keep this ride pointed in the right direction.

For motivation, Breite didn’t skimp one bit. Rusty Vaughn Race Engines built up one scary BBC for this ’65. It all starts with a pump gas 468ci four-bolt main block. From there, a forged steel crank, Eagle rods and Wiseco forged pistons were added to make up the rotating assembly. A Comp Cams Mutha Thumpr hydraulic cam and lifters were added to get the valves jumpin’ in sync. Merlin Grumpy Jenkins rectangular port heads top the cylinders. A Billet Specialties serpentine drive handles the duties up front and looks good doing it. A FAST EZ-EFI 2.0 fuel-injection system delivers the fuel and an MSD Billet distributor hands out the spark to the cylinders.

To get all that power out back, a TH350 trans was installed along with a 3,000-stall converter. A Moser M9 fabricated rear housing stuffed with a Moser Wavetrac limited-slip and 3.90 gears are beefy enough to handle this Corvette’s power curve. Ceramic-coated and polished 35-spline axles twist the big 15x15 Billet Specialty wheels, which are shod in Mickey Thompson 33x22 Sportsman S/R radial tires. To get rid of spent gasses, a set of Sanderson ceramic-coated manifolds feed into factory big-block side pipes. To keep things cool even on those hot and nasty Jersey summer days, a Direct Fit aluminum radiator with dual electric fans does the trick.

Once the hard-core work was done on this ride, Yeti Motorsports took over and did all the finish work. The interior was restored factory fresh and fully upholstered, though there are a few add-ons. AutoMeter Phantom gauges were installed in the dash’s stock cluster, giving it a more modern feel. Of course, Breite needed some tunes so Pratt ordered up and mounted a sweet RetroSound stereo with both a Bluetooth and iPod hookup.

Before the paint was sprayed, the wheelwells needed a little modification to fit the big MTs out back. Pratt stretched the wheelwells, tubbed them and then added a factory style lip to give it an OEM look. Then to finish it off, body and paint man Jack Crow knocked this ride out of the park, blending the body mods to perfection and ultimately laying down a killer Reflex Silver finish on this Corvette’s flanks. Interestingly enough, the paint scheme follows below the 1967 big-block hood for an added custom look.

Finishing touches include a set of original 1963 window trim, restored and installed to make the split-window conversion complete. The Corvette runs a custom-built aluminum fuel cell with an Aeromotive in-tank fuel pump and utilizes the factory fuel tank flip lid to keep it all looking period correct.

So what’s in store for this Corvette? Well, Harley leads a pretty busy life as an in-demand criminal defense attorney, flying all over the U.S. handling cases. So on his limited downtime the car gets driven as much as possible. The car handles like it’s on rails and has power to spare to say the least.

When he’s not at his day job, Breite enjoys spending time working with his Harley’s Kids charity. It’s something he started over 25 years ago, helping out mentally and physically challenged children. This great organization has grown from 32 kids to over 200 today, thanks to Harley’s hard work and determination. “The kids are a real gift to me. They help me stay grounded and not get caught up in material things,” says Harley. This stunning ’63/’65 Corvette compilation is a possession that’s an exception. Vette