A 1962 Corvette Driver Made Even More Driveable

As far as she knew, her Corvette was just getting paint and interior 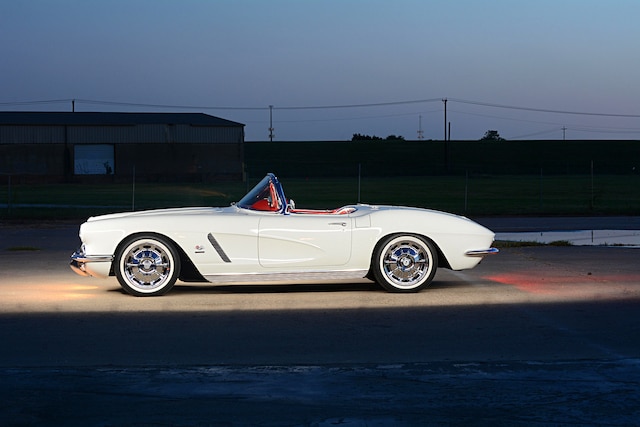 Just a paintjob and interior, he said. We’re just going to freshen it up for you, he said. Who was she to assume he wasn’t telling the truth? After all, it was her ’62 Corvette, not his. Why would he want to dump more time, money and effort into a car that wasn’t even his to enjoy?

As far as Sandy Parkerson could tell, her husband, Mick, had no reason to lie to her. He was the one with all the cars—that was his thing. He probably only got her the ’62 in the first place so she would hopefully continue to put up with his shenanigans. At least that’s what she was thinking. Behind the scenes, though, Mick had entirely different intentions and entirely different plans for Sandy’s favorite Corvette. “She’s pretty easy to work with on getting all my stuff so I figured I’d get her one, too,” Mick told us. See, he didn’t do it to just to keep her satisfied, he did it out of appreciation.

That was back in 2012 when they purchased the car. She was on the fence between a ’62 and a ’67; she loved them both. But decisions must be made sometimes and the couple really enjoy putting miles on their cars so the ample trunk space of the C1 just made a little more sense. The Corvette she ended up with was nice 300-horse, 327ci ’62 Vette with a Powerglide transmission. It was mechanically sound but could’ve used some new paint.

Sandy started driving the car more and more and farther and farther until Mick started to see a problem. This was still entirely a car with half-century-old technology, which is not the best for long road trips alongside more modern and capable cars these days. But he didn’t let on. He simply suggested they freshen the ’62 up a little bit with some paint and interior work, all the while knowing he had much more in-depth plans for it.

As the months passed, she started getting impatient, wondering how paint and interior could possibly take this long! Mick said the hardest thing was keeping all that was really going on a secret. “Toward the end it got really tough,” he recalled. This was partly due to the length of time—18 months total—and the fact that she was the one who typically signed all their checks. One can only imagine what marital strife that caused.

So what was really going on with the Corvette since it’s obvious at this point it had more work done than simply paint and upholstery? During that year and a half, Mick had the Vette sent around between numerous shops to take the car from mediocre stocker to modern driver.

When Sandy finally got her Corvette back, it was a whole new car. It now had, as promised, a new paintjob sprayed by the Bright Brothers in Alvarado, Texas. They sprayed the car in PPG White paint while the bumpers and trim were all re-chromed at JB Chrome Plating in Fort Worth, Texas. That was expected. But then it came back with a new set of wheels, too. Wheels that looked sort of stock, but not quite. They are chrome Circle Racing 17x7 wheels made to mimic the stock hubcaps. Wrapped around them are Diamond Back 225/50R17 whitewall tires. So maybe he just had them throw on a set of wheels and tires to go with the new paintjob? Nope.

Inside the cabin things were a little different, too. Not only was the carpet new and everything reupholstered in red leather as promised, but now there was a custom center console with cup holders and a touchscreen Kenwood head unit. Below the fancy stereo head unit are three climate-control dials indicative of a brand-new Vintage Air A/C system. On either side of that are vents for the Vintage Air as well as USB power outlets to keep Sandy’s phone charged on her long drives ahead. Other upgrades include a backup camera, cruise control and a stock-style steering wheel with a decreased radius mounted on an ididit steering column.

All the interior and exterior modifications were great and really brought Sandy’s Corvette forward a few decades in terms of style and comfort. But, the biggest change Mick was hiding from her for all those months was done by Mark’s Garage in Fort Worth, Texas, and was hiding underneath the surface. All of the Corvette’s archaic chassis and suspension components were ditched in favor of a brand-new, complete chassis from Art Morrison. With tubular control arms in the front, a four-link out back and coilovers all around, Sandy’s Corvette was completely transformed. On top of the new suspension and chassis setup, the Vette also got a built Ford 9-inch from Strange with a 3.50:1 rear gear and limited-slip differential. Additionally, Baer 14-inch rotors and six-piston calipers replaced the old drum brakes at all four corners.

As for power, the old 327 ran fine but was nowhere near as powerful and reliable as the LS crate engine that replaced it. The guys at Mark’s Garage dropped in a 430-horse LS3 backed by a 4L70E from Phoenix Transmissions to get Sandy down the road smoothly with all the power she could ever need. An aluminum radiator from Mattson’s Custom Radiator was installed to keep the 6.2L V-8 running cool while an Eddie Motorsports Front Runner attached the necessary accessories. This included a 160-amp Powermaster alternator and Vintage Air A/C compressor. Hanging on the side of the LS is a set of black Art Morrison ceramic-coated headers connected to a 2 1/2-inch stainless steel system with MagnaFlow mufflers.

While it might look like just a light restomod from the outside, the Vette Sandy got back after that 18 months was something else entirely. “All the cars we’ve got we have built to drive,” Mick told us. So what better excuse get out and drive than to have a Corvette built that makes you really want to drive it? With Sandy at the wheel they’ve already put close to 9,000 miles on the car. So when Mick said they drive their cars he wasn’t joking! Vette