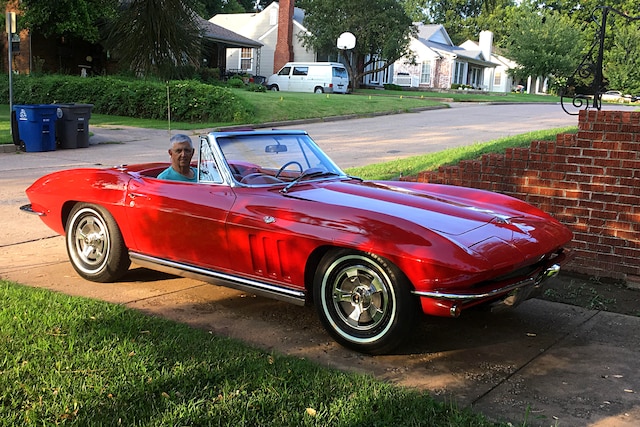 In 1983, when he was 10 years old, Rusty Brock was intrigued with an old color slide he saw of his father’s 1965 Corvette his father bought brand new. “Oh, I used to own that car back in the day,” George told his son.

The intrigue turned into a mystery to solve when they dug up old paperwork on the Corvette, which included the VIN. George had a policeman friend that “ran the VIN” in 1983 and found the owner of the old Corvette 20 miles away in Claremore, Oklahoma. “We called the guy up and confirmed he had a 1965 red/red convertible and made arrangements to go look at the car,” Rusty said.

1965: This vintage photo shows George Brock behind the wheel of his new ’65 Corvette. Brock, high school class of 1961, traded his ’58 MGA for this new Corvette.

They met the owner and for the first time a certain 10-year-old sat in a Corvette, which his father bought new in 1965, looking virtually the same as the day he sold it in 1971; but not to this man, name of Kenny. The sad news was Kenny chose to keep his Corvette, even though George offered him $14,500, a decent sum in 1983 for a 300-horse 327 with a four-speed in an unrestored original convertible.

“My dad almost had the car bought one day back in ’87 or ’88. He was counting out the money and his wife came out and said we’re not selling the car, so that was the end of that.”

One good thing that came out of this pursuit was Rusty caught a case of Corvette fever. Before he even got his license, the teenager bought a Daytona Blue ’64 convertible, his very first car. Still, that deep-down yearning persisted for Dad’s original 1965. “You can’t put a price on sentimental value,” Rusty said.

2016: After Rusty Brock bought the car back in 2016, he took this photo of his father in the car in the same location 51 years later.

At home, he dug up more photos of his dad with the ’65 Vette. Rusty was amazed how the car still wore its original paint and had its original seats and door panels. “Kenny said he had really done nothing to the car. He seldom drove it.”

“My father remembered doing stuff to the car, and that stuff he did with the car was still there, like putting the bumper hitch on the back. He had drilled two holes in the bumper and they were still there and my father still has the trailer hitch that he saved all these years!” Rusty said. In fact, Rusty could make out little scratches visible in an old color slide of the red paint that were still in the paint today, verifying the car’s originality.

Over 30 years had passed since he and his father had rediscovered the ’65 Corvette. The year was 2016 and Kenny still would not sell. “I would call him up every six months or so and inquire.”

This vintage slide shows his father’s old MGA and his new 1965 Corvette.

By this time Rusty owned three vintage Corvettes and was an NCRS member and had even done a frame-off restoration to NCRS standards for his ’64 and had the car judged. Finally, Kenny said he would not sell, but he would trade “straight across” for another red/red 1965 convertible exactly like the one he had.

The hunt was on. Rusty could see light at the end of this tunnel. Local red/red 1965 convertibles proved to be basket cases. Finally, Rusty found a 1965 on eBay for sale in Kentucky. The Corvette was identical except for a black top instead of a white top, and the 327 was the base 250-horse instead of the 300-horse.

The seller was apparently touched by Rusty’s story, but before they made a deal for $36,500, Rusty sent Kenny many photos to make sure he would do the trade. Rusty did not see the car other than in photos, and neither did Kenny, but the deal worked and everybody was happy. Kenny got another ’65 red/red convertible, and Rusty got his father’s old Corvette he bought new in 1965 and sold in 1971. Vette

George Brock joined the service and left the Corvette with his sister to drive. Here he is seen with his best friend (on the right) Billy Don Rebholz.

Another vintage photo that intrigued the 10-year old Rusty Brock was this photo of his father, George, with his new ’65 Corvette “back in the day,” meaning the 1960s. If only he could get back his father’s old ride, how cool would that be?

The seats were still original, never restored; as was the rest of the car.

The ’65 Corvette is seen here parked beside a ’55 Chevy in another old family photo.

In the ’65 Corvette, Rusty found the reverb speaker “out of a Buick Riviera” that his father installed back in the day, including “tracing marks.”