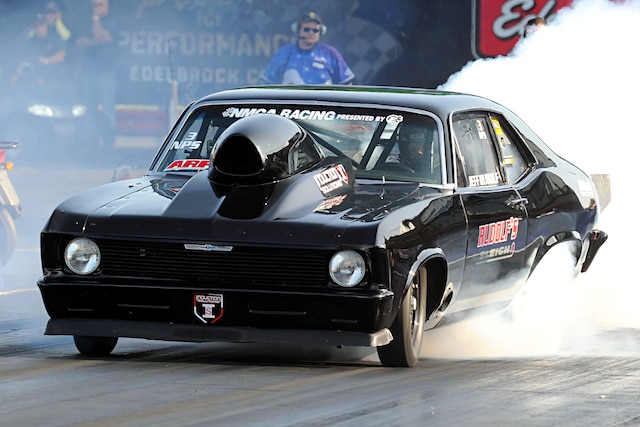 Muscle Car Monster
We just love the race car moniker Indiana’s Jeff Rudolf gave his 1970 Nova: Rudolf’s Sleigh. This NMCA circuit Pro Street racer has been a big fan favorite within North America’s Fastest Street Car racing genres since first being set in motion back in 2015. Powered by a nitrous-assisted 521ci Dart engine, Jeff is well known for preceding his runs down the quarter-mile with some impressive burnouts that never fail to disappoint. His team uses an engine program from David Howard and employs an RPM Transmissions-built Turbo 400. Key crewmembers and team tuners/consultants include Kelli Urey, Kiefer Simpson, Brad Robinson, Patrick Barnhill, Jason Lee, and Steve Summers. This Nova has been highly successful within NMCA racing, winning multiple events and finishing Second in season points in both 2016 and 2017.

On the Mark Malibu
Pennsylvania’s Peter Oakes campaigns a meticulously maintained and perfectly prepped 1966 Malibu station wagon. Targeting Stock Eliminator—J/SA in particular—Peter has been actively racing with this car since 1983. Recently, the car was given a fresh coat of paint, which gave it a new look while maintaining its original style. That effort was rewarded almost immediately when it was awarded Best Appearing at the NHRA Dutch Classic event held at Maple Grove Raceway in 2016. Bernard Brothers built the car and Steve Ficacci assembled the 327ci engine, which, of course, uses Chevrolet Performance parts extensively. Peter’s team includes his wife, Anet; son Shane; and daughter-in-law Sara.

A First for Famous Family
Louisiana’s Candies family has a very long and deep tradition within drag racing. Family patriarch Paul Candies rose to iconic status while racing a series of nitro-burning Funny Cars with his partner Leonard Hughes. During that time the team had raced many brands, but it was only until recently that the brand was Chevrolet. All that changed when Paul’s youngest son Brett Candies got behind the wheel of a 2012 Chevrolet COPO Camaro. Brett acquired that car through Roger Allen Chevrolet. With work done by Roush Performance, the COPO features a naturally aspirated 427ci (425hp) engine. Brett runs a variety of classes and circuits with the COPO, including NHRA and NMCA Stock and Super Stock. The quickest the car has run is 9.07 at 147 mph with crew chief Jim Dupuy making the tuning calls. The newest addition to the Candies Family Motorsports team features associate backing from Strange Engineering, Royal Purple, Roush Performance, and Stanfield Racing Engines.