Too Expensive Even For Free 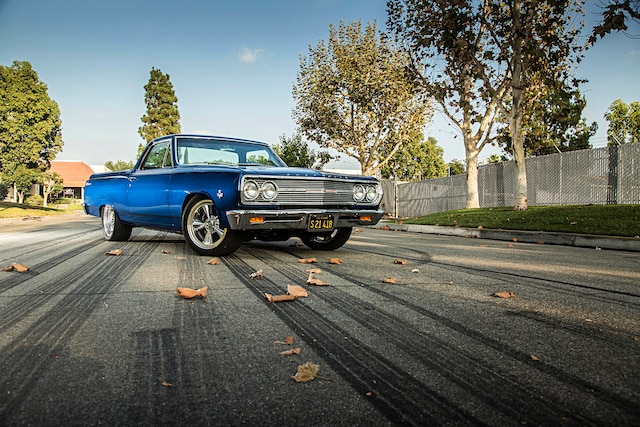 It all seemed like a good idea at the time. In fact, it seems like a good idea each year when one of the Currie brothers builds a car. They do it as a kind of promotional tool for their company, Currie Enterprises. You know, the axle shop. “It’s sort of our way to tell people that we already have a part number for a product,” Charles Currie observes.

And the car Charles found was the perfect candidate. For starters, it nearly rounds out his collection of two-door A-bodies. “I kind of have a thing for those I guess,” he admits. But more importantly, it had something very favorable going for it: original paint. “This isn’t my first rodeo,” Charles explains. “I know what can be hiding below two or three coats of paint. But this thing was clean.” Add to that, he horse-traded into it. “I was into it for practically nothing,” he gloats.

Read magazines for long enough and you’ll probably recognize everything that preceded this as a kind of foreshadowing. Usually a car introduced that way turns out to be less than perfect. But Charles’ find wasn’t that kind of car. “This thing was completely f***ed,” recalls builder Kev Elliott at Kev’s Rod & Custom in La Habra, California.

“It appears that it was parked downhill and leaning to the left,” Charles speculates, explaining how it had to have sat under a tree for much of that time. And if the registration tells us anything, that may have been a long time. “The tags expired in 1977,” Charles says.

“By that time I’d already spent a fair bit of money paying Kev to tear it down and having it blasted,” Charles recalls. “I wasn’t into the car very much and I figured we already uncovered the worst of it.” And as an expert in foreshadowing, you know what’s coming next.

“There was like $200 in just square tubing to brace the body before it got cut up,” Kev points out. And it was during this cutting process that they discovered a whole new level of rot. “All the inner structure; that was gone, too,” he adds. Naturally, the smuggler’s box—the area created by the bed floor immediately behind the cab—was toast. “And nobody makes anything to repair that area, except for the vertical braces,” Kev notes. “At least not for the ’64 and ’65.” Nevertheless, he persisted. “By this point we had a lot more into the car,” Charles says. “I couldn’t just back out.”

What followed was a meticulous reconstruction of an El Camino using Chevelle parts. “Everything in the floor from the firewall to the rear axle is new,” Kev begins. “It has new Chevelle rear arches (translate: wheel openings) but I had to fabricate the lower quarters ahead of and behind them. New driver-door skin. I also fabricated the lower A-post corners at the windshield and fabricated the lower rear-window channel.” Because nobody makes the bed front bulkhead, Kev made a new one from scratch. “The smuggler’s-box cover was bad on one side but we had another that was bad on the other side so I welded the two together.”

And the relentless process of exposing further damage never seemed to stop. “It got hit in the rear corner so I had to repair that, too. The bed looked really good at first but we noticed that the floor was bent like they threw bricks back there,” Kev says. Original plans called for a bedliner but the rest of the car shaped up so nicely that Charles asked Kev to straighten it out. “He made tools in the shape of the ribs and just got under there and worked it out,” Charles says. “It took a whole week,” Kev laments.

Enough about all that misery; this project isn’t defined by its inauspicious beginnings. This title is all about what things become, and in this case Charles tapped into his roots to build a high-school dream car of sorts.

No, he didn’t intend the car to look the way it actually would’ve looked when he graduated high school in 1974. Because it isn’t 1974—his interests have changed and the car proves it. Rather, he built it with a little bit of that high-schooler philosophy, which is basically to lightly modify what’s available using contemporary stuff and available resources.

So really you could say the main thing that’s changed is Charles Currie’s resources. After such an intensive reconstruction, one could make the case that the car Kev Elliot built is more than handsome; it’s beautiful to its core. And that doesn’t exactly sound like a bad idea to us. CHP

Check out The Custom Shop's 1965 Chevy El Camino which is so low the oil pad touches the ground. Under the hood is a 350 Chevy Small-Block with GM Performance Fast Burn cylinder heads and a polished aluminum intake manifold. Only at www.superchevy.com, the official website for Super Chevy Magazine.

Check out this 1965 Chevrolet El Camino that has a Chevy 350 small-block engine and Flowmaster mufflers. Read more about this classic only at www.chevyhiperformance.com, the official website for Chevy High Performance Magazine!

Check out the new Chevy performance tools that could help you with your muscle car build and our answers to questions from you fellow readers at Chevy High Performance.

Robert and Diana Michael's 1965 Chevrolet El Camino was equipped with a 383-stroker engine backed by a TH350 transmission just in time for the 2002 SEMA Show. - Super Chevy Magazine

Check out this custom 1965 Chevrolet EL Camino & Nova, brought to you by the experts at Chevy High Performance Magazine.

If you think about it, that’s what performance is all about. It’s old school now to have a car that leaves as though it were launched off the U.S.S. Enterprise but