Reborn and Blown 1972 Chevelle from Down Under

Supercharged Salvation: Aussie Ben Brown took a half-finished reality show slapper and transformed it into a bagged and blown showstopper 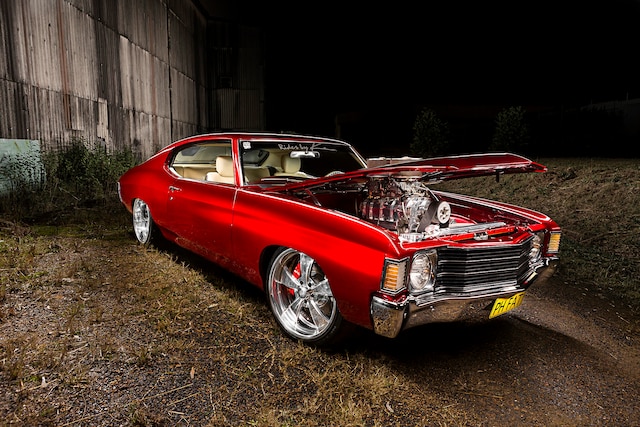 Each year, hundreds of old cars make their way across the Pacific Ocean from the USA to Australia. There are plenty of companies set up purely to help buyers import classic American muscle, and Aussies have been doing it for decades. But it’s always a gamble—particularly if you can’t fly over and personally check the car out beforehand.

Thirty-two-year-old Ben Brown had been scouring the Internet for a classic car of his own. His objective was to find something a little more unique than the typical first-gen Camaro or Mustang options. “I wanted something different,” he says. “I love the fat rear end of the Chevelle, so I began my search in the USA and ended up buying this ’72, which had been on the show Car Warriors.”

Car Warriors, hosted by rodding legend Jimmy Shine, pitted two teams against one another to build a cool car in just 48 hours. As you can imagine, with a deadline of just 48 hours, corners are going to be cut and Ben found himself thoroughly deflated when he finally got his hands on the car.

“When it turned up it was nothing like the photos and not finished how it was on TV. I was so excited tracking it on the ship all the way from New York, but then it turned up and it didn’t start, none of the electrics worked, and the interior was held together by a few screws,” recalls Ben. The first thing he did was to rip out the entire interior.

I was just going to redo the interior and get it registered as a weekend cruiser, but then things started to snowball. I spoke to a mate about the paint as it had a terrible pinstripe down the side and we needed to rub the car right back to fix that, so I thought I’d change the color.”

And change it Ben did. Originally blue, Ben intended to go for a classic black. However, shortly before taking the car to the painter, a conversation with the team at House of Kolor in Australia saw Ben arrive at the panel shop with tins of Kandy red and HOK’s Shimrin gold base.

“Rod finished the car and, when I went to pick it up, everyone was amazed at how good the color looked and that right there was when the bug really hit.”

Finishing the car from this point was no rush job. In fact, Ben says he parked the car for about a year while considering his options. While slowly collecting myriad parts for the car, he came across a sale notice on Facebook for a brand-new supercharger. Shit just got real.

“I called Rob Zahabi up at Rides By Kam,” he says. “We discussed a plan of attack for about two hours on the phone and, about a month later, I did a road trip up to the Gold Coast with a ute (utility vehicle, think modern El Camino) full of parts and a half-finished Chevelle in tow. This is where Rob took over and got the car to where it is today.”

From here, the plan included rebuilding the 383ci crate engine the car came with to handle the boost of the new 6-71 TBS blower (topped with twin Holley 750-cfm carbs and fired by an MSD ignition), as well as fitting RideTech airbags and some tasty new Baer six-piston brakes to the front end. These are partially covered by the classic-looking Intro V-Rod 20x10 wheels that Ben had bought around the time the car was being painted. Backing up the mill is a manual TH400 that feeds into a beefed-up 12-bolt rear.

Ben also finally got to eradicate any memory of the wretched interior that he was faced with when the car came off the cargo ship—and he did it in spectacular fashion. With the entire cabin laid bare, Ben had a new fiberglass dash and center console from The Shop fitted and painted in matching Kandy red. The dash was then filled with AutoMeter gauges and the center console boasts a 7-inch Sony DVD/CD player that sends signals to a slew of Hifonics speakers and subs.

The driver and three passengers sit pretty in Holden Commodore SS VE bucket seats covered in cream leather. The same cream cowhide also covers the custom door trims, kick panels, as well as lines the sides of the console and the billet half-wrap steering wheel. You’ll find even more cream cowhide in the trunk where the Hifonics four-channel power amplifier and 12-inch subwoofers leave plenty of space for the shopping.

“The car was finished late December 2014 ready for SummerNats as its first show, and I was stoked to get into the Top 60,” Ben says. “I got an achievement award and, more than anything, got valuable advice from the judges on small changes and tweaks we needed to do.

“I’m in the middle of working out a plan for a new and improved PH-FAT, which includes tubbing and notching the rear end, smoothing everything, a possible color change, rollcage, and new motor combo,” he says. “I want to be in the 1000hp club to enjoy PowerCruise (a popular car show in Australia that’s focused on driving events), but still have a show quality car at the same time.”