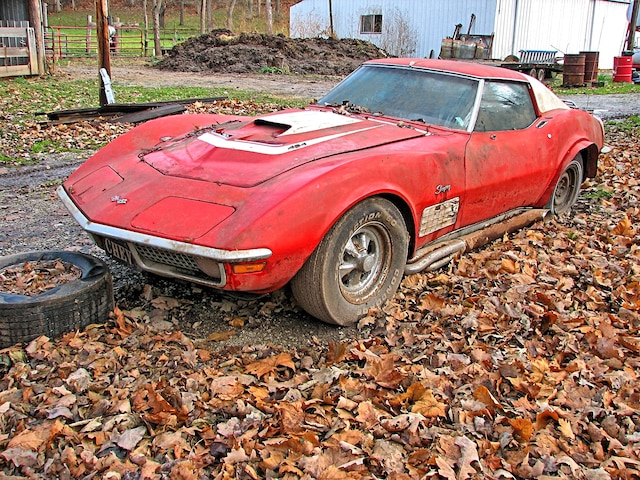 His ’69 Vette became much more powerful with an LT-1 replacement, but was his small-block hot enough to outrun a big-block in a 1971 model? In those days, Smith knew his friend’s ’71 had a 454, but they weren’t wise to the option code LS6. “Somewhere around 1976 he and I actually took off down the main street of our little town to race, just ’cause everybody sitting there wanted us to.”

Smith described the paint scheme as reminiscent of a Baldwin-Motion style Corvette of the early 1970s. The metal flares remain from its glory days.

What Smith remembers most is how loud both cars were, so loud they thought they might blow the windows out. Harry’s ’71 had chromed Hooker header pipes on the sides, a functional scoop on the stock hood, ET mags, metal fender flares and a Baldwin-Motion type paint scheme on the original Mille Miglia red paint.

Smith was astounded to see a vision of this same car parked in the yard of Harry’s parent’s farm. He thought to himself in reverence, the legend lives. That night Kris Smith tracked down and called his high school classmate Harry and asked him what he was going to do with his old Corvette. “He said his parents had died and he actually thought about renting a backhoe and burying it in the back of the barn.”

Harry wasn’t ready to sell the ’71 and Kris didn’t push his old friend into a decision. They would keep in touch. Apparently, Harry needed some time. When Kris noticed the Corvette was still parked in the yard on Thanksgiving of that year—2005—he called Harry and offered to store the Vette in his barn. “I said I won’t charge you anything, but at least it won’t deteriorate anymore.”

The interior could be ordered in black or red, as seen here, with the exterior paint code 973 (Mille Miglia Red).

Kris stored the ’71 Corvette for three to four years and kept in touch with Harry. Finally, one evening on a phone conversation, Harry decided to sell the ’71. Kris knew his friend had a hard time letting the car go so he didn’t wait. “I thought, man, I better just go meet him tonight. So, I just met him that evening and gave him the money.”

The old Corvette sure needed a ton of work, but it was all there, including its original LS6 engine. The year was 2008. With two kids in college and having just restored a black 1965 Corvette, Kris and his wife had to wait to pay a shop to work on the ’71.

Now he knew why he hadn’t stood a chance of winning that race in 1976. His LT-1 was a hot small-block, but no match for the legendary LS6 big-block. Vette

Kris Smith bought his old nemesis, an LS6 Corvette. The car had aged in its Day 2 configuration. This is what a teenager did with a 1971 LS6 Corvette.

Hooker chrome side pipes were another 1970’s modification.

The LS6 is a numbers-matching original 454.

The hood is original but customized with a raised center cutout for a scoop for fresh air induction.

The last inspection is dated 1978.