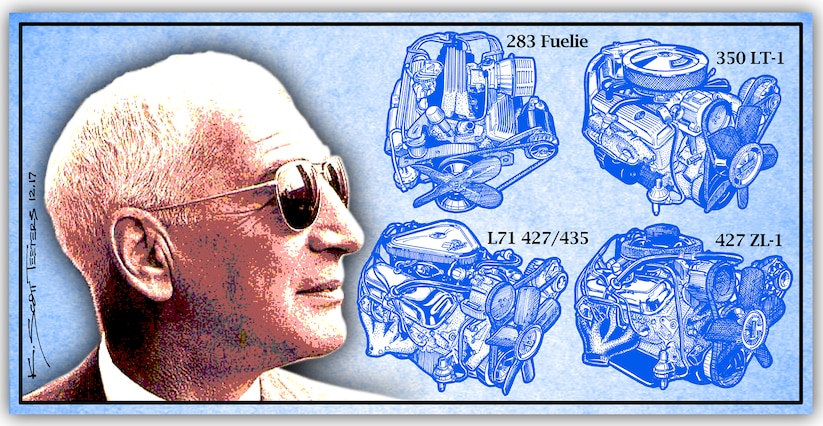 One of the definitions of the word godfather is: “one that founds, supports, or inspires.” Of all of the Corvette’s “founding fathers” none are more deserving of the term than Zora Arkus-Duntov. It is not an exaggeration to say that were it not for Duntov, the Corvette never would have made it past 1970.

Although the Corvette fit the definition of a sports car when Chevrolet released the car in 1953, they said that the car was “not a sports car.” But when Zora saw the Corvette at the 1953 GM Motorama in New York City, he said that it was the most beautiful car he had ever seen, and knew instantly that he wanted to be a part of the new Corvette team.

Zora was born on December 25, 1909; his birth name was Zachary Arkus. Both of his parents were Russian Jews living in Belgium. His mother was a medical student and his father was a mining engineer. After the Russian Revolution, the family moved back to Leningrad, Russia, but his parents divorced. His mother’s new partner was Josef Duntov. Years later, Zora and his brother Yura added the surname Duntov.

Josef Duntov was an engineer for the Soviet government and was transferred to Berlin. Zora loved Berlin. When he wasn’t attending classes at the Charlottenburg Technological University, he was drawing cars, writing papers, riding motorcycles, roaring around in his Type 30 Bugatti and chasing girls. When Zora met Elfi Wolff, a beautiful German dancer with the Folies Bergere, it was love at first sight, and the couple married in France in 1939. When World War II broke out in 1939, Zora and Yura wanted nothing to do with fascism and joined the French Air Force. But when France surrendered, the entire Duntov family made plans to get out of France and immigrate to America.

All Zora ever wanted to do was build and race cars. After the family settled down in New York, Zora and Yura started the Ardun Mechanical Corporation, a machining company. Quickly, the company became a success, receiving an “A” classification with the Army Air Force Quality Control. Government work for the war effort made Zora and Elfi wealthy. After the war Zora and Yura made their contribution to the burgeoning hot rod industry that set the stage for Duntov’s part of the Corvette story.

Ford brought the V-8 to the masses and it wasn’t long before guys started hot rodding the flathead V-8 Ford. The design was cheap and simple, but didn’t breathe very well. Zora designed an aluminum, overhead valve hemi-head bolt-on kit for the popular Ford flathead engine. The ARDUN OHV hemi heads took output from 100 hp to 160 hp; a 62-percent increase! They offered a conversion kit; a complete engine and an all-out, 200hp racing engine. While terrific as a concept, Zora wasn’t a “development engineer” and didn’t have the patience to sort out the details. Through a series of business mistakes the company eventually folded. Also, in 1946 and 1947 Zora had two failed qualifying attempts at Indy.

By 1948, Zora was looking for a race car company to work for and took a job working for Allard England. Without a company to run, Duntov was able to stay focused on engineering and development work for Sydney Allard’s sports racing cars. In 1949, Zora raced an ARDUN-powered Allard J2 at Watkins Glen, but had braking problems. Then in 1952 Zora drove a new Allard J2X at Le Mans, but broke an axle at the 14-hour mark.

Working for Allard was fun but Zora knew there was no future there. In 1952, he came back to New York and started looking for employment with an American car company. Duntov applied with Chrysler, Ford, Lincoln-Mercury, Ford and General Motors. Chrysler suggested that his racing engineering skills would be more suited to much smaller companies. He even tried Jaguar, but was rejected. A letter to GM’s Chief Engineer Ed Cole in October was responded with an invitation to “stop by if you’re ever in Detroit.” But Cole passed Duntov’s letter to his head suspension/chassis engineer Maurice Olley, who responded to Zora on January 5, 1953, with an invitation for an interview.

Around this time Duntov had his “Oh, WOW!” moment upon seeing the Corvette at the 1953 Motorama. After a long series of letters and interviews, on May 1, 1953, Zora Arkus-Duntov was hired by GM to work in the Chevrolet Engineering Department under Maurice Olley, with a starting salary of $14,000. Zora and Elfi didn’t fit into the GM corporate culture, and Olley and Duntov did not get along at all. Zora solved engineering problems with an intuitive sense of mechanics while Olley wanted to see calculations. GM executives socialized at country clubs and played golf while Zora went to races and played around with boats on his weekends. Elfi passed on invitations to social lunches, preferring to spend time with her entertainer friends. Yes, the Duntov’s were misfits in GM’s stuffy gray suit world. Three weeks into his employment Zora was almost fired by Olley because he announced that he was taking off to drive for Porsche at Le Mans in June. Although Duntov worked for Olley, he reported to Ed Cole, who begrudgingly let him go racing, but without pay.

Fortunately for all of us, Duntov got beyond his issues with Olley and was transferred to the GM Proving Ground. The work was beneath him, but he needed a job and soldiered on. It was a speech he gave at a Lancing SAE meeting about how high-performance programs can enhance efficiency and reliability of passenger cars, and that the Corvette would be the perfect platform for such R&D work. While other engineers were more thorough in their development work, Zora had the deep understanding of racing, and the enthusiasm that could make Chevrolet an authority on performance cars.

By the time Duntov got to work on the Corvette, his initial conclusion was “the car really stunk.” Zora was coming from a racing perspective and the Corvette was never intended to be a racer. He said, “Since we cannot prevent people from racing Corvettes, maybe it is better to help them to do a good job at it.” Thus began the evolutionary transition of a car that was never designed to be a racer. Duntov was the perfect man for the job; truly, there was no one else in Detroit in 1954 that could have made Earl’s beauty queen sports car into a fearsome racer. The super-successful C5-R, C6.R and C7.R Corvette Racing Team owes it all to Zora Arkus-Duntov and a ton of work.

Duntov’s serious work began late in 1955, and by February 1956 at Daytona Beach, his trio of modified 1956 Corvettes set speed records. From there it was a class win at Sebring and “Bring on the hay bales!” 1957 saw the introduction of the 283 Fuelie and the first of a long series of RPO Racer Kit Chevrolet-engineered parts for racing Corvettes. Zora wanted to take a team of Corvette SS Racers to Le Mans in 1957 but the AMA Racing Ban stopped him. By the late 1950s, thanks to the parts Duntov and engineer Mauri Rose developed for the RPO program, privateer Corvette racers were winning championships. Then, closing out the C1 generation, the Grady Davis Gulf One Corvettes took the 1961 SCCA B/Production and the 1962 A/Production Championships. To jump-start the C2 Sting Ray, Duntov launched the now-legendary RPO Z06 racer kit and the Grand Sport Corvette. Again, Zora wanted to take a team Grand Sports to Le Mans, but GM’s strict AMA Racing Ban got in the way and only five Grand Sports were built.

Duntov was relentless in pushing performance and created numerous mid-engine Corvettes prototypes. “Brakes” had been troublesome for racing Corvettes since 1956. By 1965, all production Corvettes had four-wheel disc brakes. When the big-block was introduced in 1965, Chevrolet realized that cubic inches were the easiest way to more horsepower. By 1967, Duntov introduced the fearsome 427 L88. From 1967-1969 only 216 L88 Corvettes were built, and are super valuable today. In 1969, the 427 ZL1 was an L88 with an aluminum block, offered L88 power but with small-block weight. In 1970, Zora released the 350 LT-1, the best small-block Corvette to date. From 1970-1972, RPO ZR1 was the Racer Kit for small-block racers. And lastly, Zora was responsible for the 1974, customer applied, “Greenwood” widebody kit, available from the Chevrolet Performance Parts catalog. When Duntov retied in December 1974, he had a mid-engine Corvette in the works, but management said, “We’re selling all the Corvettes we can, why do we need a mid-engine Corvette?” Sure, “business is business” but it would have been so cool.

Without Duntov supplying raw performance, even Bill Mitchell’s beautiful Sting Ray wouldn’t have saved the Corvette. The Corvette survived because of racing and Corvettes raced because of Duntov. Therefore, Zora Arkus-Duntov ultimately deserves to title as “Godfather of the Corvette.” Vette

Photos and Illustrations by K. Scott Teeters and courtesy of GM Archives