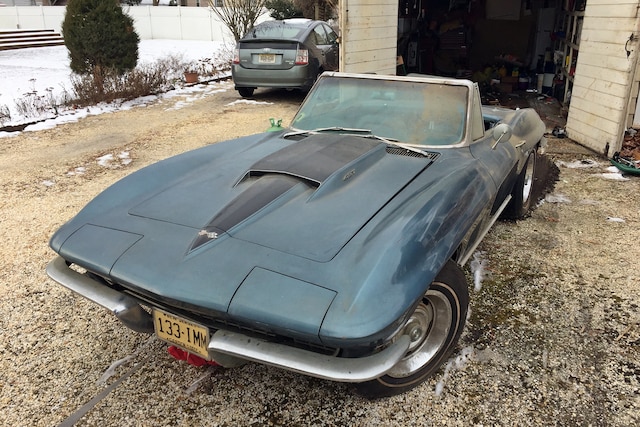 Daniel Schutzbank likes to get up early and get his morning fix of muscle car news on the web. It’s typical for Daniel to scroll through pages of info on his favorite sites, looking for interesting topics featuring his favorite muscle car rides. It’s both a hobby and a small part-time business for him, and also for his younger brother David.

A few months back, Daniel happened upon a post about a survivor 1967 L71 (427/435) Corvette that had been sitting for the better part of 30-odd years under wraps. Daniel and David were intrigued about the car from the start so they contacted the man who posted the news on the web. He was seeking more information about the current value of the Vette in its current condition. The email exchange ended with Daniel stating that he would be interested in purchasing the car, if it became available.

The two then spoke on the phone and exchanged information. However, nothing immediately transpired and Daniel candidly admits, “I just completely forgot about the car.” Well, he did until he received a call eight months later.

After having his memory jogged and being sent photos of the car, the gentleman advised that unfortunately he was not going to be able to pursue it further. To the brothers’ excitement, the pictures revealed a completely untouched survivor big-block Corvette that appeared to have been sitting on four flat tires in a dark and dry garage.

So now the “garage fresh” Corvette was up for grabs. The poster also clarified at this point that this was not a highly sought after L71 Corvette, but the rarer L36 (427/390) version, with just the single four-barrel topping the big-block. The L36 is engineered with two-bolt mains and hydraulic lifters. This option remains sought after by collectors, especially in this seldom seen, unrestored condition. The brothers were unfazed with this revelation and still were interested in possibly procuring the car.

And not only was this an interesting ride, it was also an extremely original one to boot. They were told that the Corvette still held on to its original 427/390hp engine, along with its born-with M21 close-ratio transmission and FA-code Positraction rear, the latter stuffed with 3.70 gears. The OEM teal vinyl interior and the white convertible top were both supposedly still intact and in good shape as well. Out on the flanks, another welcome surprise; it apparently still wore its original Lynndale Blue paint scheme.

Days later, David and his father, Harvey (Daniel was out of town), took the short ride to the sandy banks of the New Jersey Shore to see this rare Corvette in person. When they arrived they met up with the owner (coincidentally named Dan) who was the long-term title holder of the Corvette. His attachment to the car was quite visible, and was a little nervous about showing the car to prospective buyers. But he had made up his mind the time was right to send it off with new caretakers, after owning the car for the better part of 40 years. The car had been idle for almost 37 of those years, sitting quietly in a garage just 300 yards from the Atlantic Ocean.

When the garage doors opened, the car looked just the way it was described. A layer of dust covered the paint on the Vette, possibly keeping the salt air from permeating. There was just one small window in the garage, which helped keep damaging UVs out and kept the paint and vinyl out of harm’s way. And luckily, this particular neighborhood was spared damage from Hurricane Sandy; a storm so severe and devastating to the shore communities that its aftermath is still being rectified five years later. Not a drop of salt water made its way to the owner’s fortified location.

Next, a thorough inspection ensued. The father/son team validated the mechanical components, including the born-with original engine with its OEM engine pad stampings, transmission stampings with part number and VIN and rear differential stampings. They also verified all original fiberglass bonding strips were present revealing the car was never in an accident. Finally, the trim and VIN tags were inspected revealing they too, were born with original and all trim/colors precisely matched the data plate. And while the exterior was dirty, the team recalls noticing the factory applied red oxide primer, especially on the lower half of the car, a common telltale sign that this vintage Corvette retained its factory applied paint.

Thus, after an inspection of the critical details, the Corvette turned out to be everything it had been claimed. With only two owners over the course of its life, the 1967 had only racked up a mere 38k miles on the road. The car is documented by the tank sheet (still on top of the original tank) and the Protect-O-Plate. A folder of receipts from 1970-’80 showed its recent history and verified its mileage numbers prior going into storage. Documents indicate the car was sold new out of Dooley Brothers Chevrolet in Florham Park, New Jersey.

So David and Harvey left a deposit for the car and returned the following weekend with Daniel to extract the Corvette. Though they didn’t sleep much that week, the brothers were up early on Saturday and ready to claim their prize. Owner Dan had pumped up the ’70’s radial tires prior to their arrival to make moving the Corvette that much easier. To their amazement, they all held air. But the brothers soon found out that unfortunately only three of the four tires rotated. So their truck was needed to coax the Corvette out of its lair. Once out in the sun, the brothers ran down the numbers again, checking to make sure once again this car was indeed as original as they thought. They were dead-on!

Once home, Daniel and David consulted their longtime friend and mechanic Tom Perito of Moonlight Garage in New Hyde Park, New York. With the help of Richie Hoffman at Moonlight, and a little mystery oil, they got the engine to start, and run well with little effort. The whole process was documented by their dad, who excitedly took many videos, most notably when Richie got the car running for the first time in nearly 40 years. The guys at Moonlight Garage took extra care while working on the car not to obstruct factory finishes, and inspection markings which Daniel and David are thankful for.

Daniel and David would like to send thanks to Tim Gilmore, Steve Bramati, and Ara Gechijan for their help and support with their special Corvette. As for the future, the twosome will continue with their business venture, Matchbox Classic Garage, Inc., which is their outlet into the classic car hobby. Their infatuation with collector cars, and especially Corvettes, is their reason for starting their company. The brothers have an enthusiastic following of likeminded gearheads who frequently consult the two for original/GM parts, pre-show prep and restoration management services.

There also is extra care taken to prepare the Corvette for the show season. As with such a rare find, cleaning and prepping a car to be judged as a “survivor” can be a tricky undertaking. Both Daniel and David understand this and took the precautions needed not to prep the car to be judged. Their plan is to show the Corvette in the National Corvette Restorers Society, Bloomington and Muscle Car and Corvette National events in the Survivor class over the next years, preserving all original finishes, factory markings, hardware, etc … on the car.

As young ambassadors to the hobby Daniel and David (30 and 27) are helping keep the fire in the vintage car pastime. As for the Corvette, it joins the growing collection along with a documented 1969 Camaro Z/28 and a documented 1970 LT1 Corvette convertible and will be cherished with Debbie (mom) and Stefanie (sister) throughout the show seasons to come. Vette