The Archives: The Z Gets an A 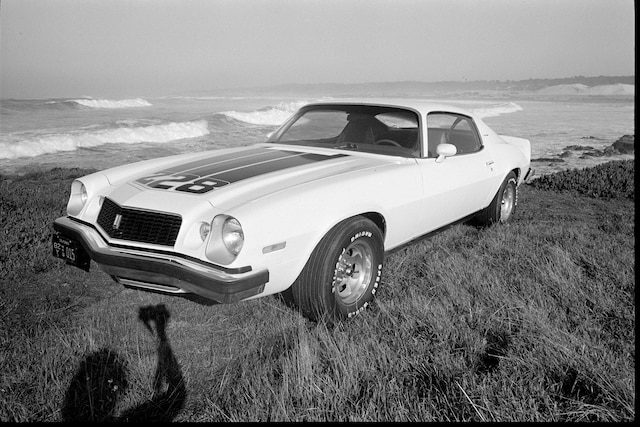 “What better way to evaluate a vehicle’s performance than to subject it to actual highway conditions?”

With that thought in mind, Car Craft magazine’s Steve Collison changed his travel plans at the last minute when this brand-new 1974 Z28 arrived at the Petersen Publishing offices. Why fly to San Francisco, he figured, when he could “combine pleasure with business”?

The second-gen Camaro got its first major rework for the 1974 model year, done largely to accommodate the government’s 5-mph crash regulations. Collison praised the new look, saying Chevy’s designers “did a fine job of integrating the now-mandatory 5-mph fore and aft bumpers without interrupting the Camaro’s clean lines. In fact, the car looks so neat we doubted if much would contribute to its appearance—other than tires and wheels. A set of G60-14 tires draped over 7-inch slotted wheels—both from Speed Equipment World—indeed added the finishing touch to a beautiful piece of machinery.”

Now, anyone who has made the drive from Los Angeles to Northern California up Interstate 5 knows that the nearly-arrow-straight freeway isn’t the greatest all-around test of a car’s abilities. Collison admitted as much, keeping his driving impressions during this portion of the trip to things like seat comfort, the car’s lack of a telescoping steering column, and the 9.5 miles per gallon he got from the 245-horse 350/TH350/3.73-rear-gear combo taching at around four grand.

Fuel economy improved (as did the drive) when Collison returned to L.A. via the Highway 1/101 route, taking him along “120 miles of outrageous California coastline.” There he saw 11.5 mpg. “At highway speeds over 65 mph [the northerly leg up I-5] the Z could hardly go by a gas station without a brief respite (can you imagine a 200-mile range from a 21-gallon tank?). Yet a sustained 50-55-mph pace [traveling south over the windier roads] will get you about 20 percent farther. We averaged exactly 10.3 miles per gallon for the entire 1,047-mile trip, that included all types of driving conditions.”

Why all the talk about fuel economy? The first OPEC oil embargo hit the U.S. in October 1973, two months before Collison’s trip. With lines forming at gas stations and prices at the pump rising, mpg suddenly became to some as important, if not more, than mph.

Acceleration testing at Orange County Raceway (OCIR) was done when Collison returned to “Smogville.” He ran the car “with all systems intact save for the filtering element in the air cleaner” and “tripped the OCIR beams with a best of 15.31 at 91.46 mph. The traction was decent, and the Speed World tires worked better than expected. What hurt the times was the lazy 1-2 shift from the Turbo, and the hefty, 3,800-pound reading off Orange County’s scales (with only a quarter tank of gas).”

Given the Z28’s legacy as a Trans-Am contender, Z’s have always been viewed as more of an all-around performer than simply a dragstrip wonder, with handling to match their good looks and straight-line speed. Collison reported that this newest Z lived up to that heritage, with a “stable attitude” that allowed him to “follow the road’s contour as if we were a train on rails.” At OCIR, he was able to salve the wound of slow e.t.’s by taking the “consolation prize for being the quickest car on the Irvine facility’s road course/return road.”

All in all, the latest Z28, Collison said, was “an excellent machine, if not for economy, then easily for performance and handling. It’s just the kind of car you’d let the little woman take to the store; but don’t, she might not bring it back.”

Check out this fully loaded 1974 Chevy Camaro which features a 572 RamJet engine, a six-speed transmission, stock grille, and much more! Further details and pictures of this Pro Tourer can be found at Camaro Performers Magazine.

TMI Classic Automotive Interiors has increased their products to second-gen or 1970-1981 Camaros, and amongst their products they made it easy to restore your interior back to better than new status. - Camaro Performers Magazine

Read the tech article on a 1974 Chevy Camaro Z28 Brake Install, brought to you by the experts at Chevy High Performance Magazine.

Check out as we go into the history of a Quadrajet carburetor and rebuild one for a 1974 Chevy Camaro. Only at www.chevyhiperformance.com, the official website for Chevy High Performance Magazine.