First Ride: This is the One That Didn’t Get Away 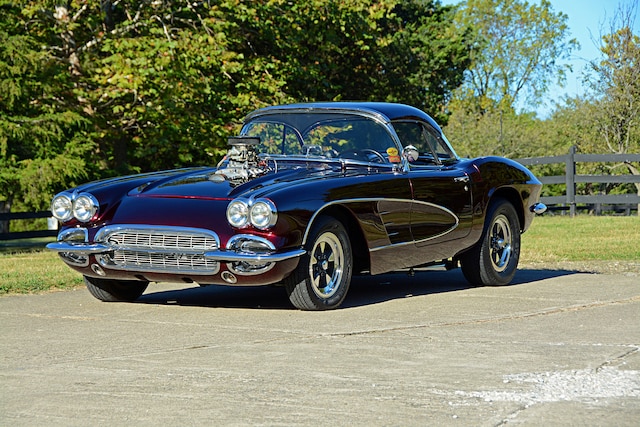 Your first car, there will never be another quite like it. Gather any group of “high-mileage” car guys and invariably talk turns to first cars, horsepower and four-speeds, followed by a group lamentation, “Darn, I wish I still had that car.” While some people go to great lengths attempting to locate that first car, for Kenny Sutter, finding his first car has always been as simple as walking out to the garage. For, you see, this 1961 Corvette is his first car.

The tale begins in the spring of 1964 when young Kenny Sutter located a fuelie 1961 Vette on a dealers lot in Dayton, Ohio. Like many a young man, he went to the “Bank of Dad” and managed to borrow $2,650 to purchase the Corvette. Armed with a fist full of dollars he headed down to the dealer and paid cash for the car. On May 6, 1964, Kenny Sutter found himself behind the wheel of a Sateen Silver with blue interior, 283-cubic-inch, 315-horsepower, four-speed Corvette. Yes, he was 21 and driving a genuine fuelie Vette. It was and is the stuff of dreams.

The mid-’60s was a wild, transitional time in the automotive world. The horsepower and muscle car wars were raging, drag racing was entering the golden age and the Corvette was often leading the charge. While some Corvettes were used for road courses, others went to golf courses, but more times than not, a young hot rodder would purchase a used Corvette for a reasonable sum and proceed to drag race on weekends and street race at any given traffic light. It should be remembered that long before Corvettes were being restored they were being modified.

Middletown, Ohio, was like many USA towns in the ’60s, with several speed shops and plenty of service stations specializing in high-performance cars. The Middletown and Dayton area also had the distinction of fielding some pretty famous gassers, not the least of which was “Ohio George” Montgomery. In the ’60s, local dragstrips were drawing big crowds. It didn’t take long for young Kenny to drive his Corvette to the dragstrip and get involved in organized NHRA racing.

This profile is 1965 personified. Not slammed like many modern-day Corvettes, this car rides stock height or even slightly elevated and it all looks period perfect. Note the cove insert spears have been painted body color.

The Corvette was raced in the Stock class from 1964-’66, with a best time of 13.18, which is an impressive number for stock 283 fuel-injected Corvette. Then one night in 1966, while racing a new 1966 Corvette, the old 283 spun a bearing. As Kenny tells it, “I was winning until the bearing spun.” The fuelie engine was then replaced with a built 327 with a Crane cam and fed by a Mickey Thompson cross-ram intake and two AFB carburetors. This moved the car from the Stock class to C/MSP (Modified Sports). The bigger engine was good for a best time of 12.41. While racing in the Modified class the original 283 was brought down to Ault & James Speed Shop in Dayton, Ohio, (and, yes, they are still in business) for a complete build to factory specs. The balanced and blueprinted engine was then returned to the Corvette, complete with the Rochester fuel injection. A set of super-rare American Racing LeMans series, real magnesium wheels were then purchased for the car. By this time Kenny had painted the car Marina Blue, one of seven different colors he would apply to the car over the span of 53 years.

While the car remained street driven, the appearance was that of a dedicated race car. Decals, numbers and the name “The Spook” made it very clear this was a race car. As for the name, the explanation is quite simple. It seems Kenny was snapping axles at an alarming rate, more than most Corvette owners. While installing yet another new axle, one of his buddies casually mentioned there must be some kind of a “spook” in that rear housing. From that day forward the car was known as The Spook.

Just one glance at that 4-71 blower sticking through the hood of this Corvette is enough to make most stop light grand prix participants reconsider. Yes, the car is very quick.

The original engine was installed just in time for Kenny’s shot at “the big one,” competing in the 1967 NHRA Nationals in Indianapolis. His car was registration number 1000, running in E/SP. As an interesting aside, the 1967 NHRA Program indicates he registered just before Hot Rod magazine editor, the late John Dianna, who registered number 1001 with a ’56 Chevy. While Kenny went out in the first round, it was an experience of a lifetime and the NHRA Nationals decal remains on the car today.

He continued to race the Corvette locally with the fuelie engine through 1971. Continuous broken axle problems prompted him to install a 4.11, Dana 60 rearend in the car and while he was under the car he also went the Modified Sports route with a CAE straight-tube axle installed up front. His best time with the Ault & James-built engine was 12.41 at 109 mph. It is difficult to recall exactly what color the car was at this point, as it changed to Diplomat Blue, then Teal Blue, Cadillac Autumn Maple and Honda Motorcycle Winebury. Somewhere along the line the interior color was changed from blue to black. By the mid-’70s his race time was limited with demands of a home and family making it more difficult to find the time and money for drag racing.

Today, power is provided by 355 cubic inches of LT-1 engine with 8.5:1 TRW pistons, Crower cam, Trick Flow heads, Hedman headers and a Weiand intake topped with a 4-71 blower. The lack of polished parts lends a racer-like look to the engine bay. A TREMEC five-speed passes the power to the Dana rear.

In 1980, Kenny bought a 1970 LT-1 crate engine with 8.5:1 TRW pistons, Trick Flow aluminum heads and a Weiand 4-71 blower fed by an 850-cfm Holley carburetor. Hedman headers lead to Flowmaster mufflers. The blower is pushing 6 psi of boost and the original four-speed box has been replaced with a more modern TREMEC five-speed topped with a Hurst shifter. The CAE straight-axle was removed and the original front suspension was bolted back under the car. Once again, Kenny painted the car himself, this time in a deep House of Kolor candy Brandywine over a charcoal silver base. The car was given an overall freshening up and it was back to street duty.

For the past 38 years the car has seen street duty. Kenny Sutter is just the second owner of this Corvette and he still drives his first car a couple thousand miles a year. In case you are wondering, you’ll be pleased to know the original 283/315-horsepower fuelie engine is tucked safely away in his garage.

As you can imagine, with the blower engine under the hood this car is still fast, but rather than being parked in the pits at the local dragstrip, the car is more likely to be parked on the spectator side of the fence or seen rolling into a local cruise night. It’s been 54 years since Kenny laid down that $2,650 for his first car, and the history and memories of this street/strip Corvette continue to mount. As Kenny told us, “Today it’s just a nice little street car.” We’d have to say it’s a lot more than that. Vette

Kenny Sutter has owned this 1961 Corvette since May 6, 1964. The car has seen duty as a race car and street car. Unlike many Corvettes of the ’60s, this car still retains the original wheelwells; body modifications are limited to tasteful emblem removal and custom paint by the owner.

Somewhere between Sateen Silver, four different blues and three burgundy paintjobs the interior was converted from blue to black. A Grant wheel and dash mounted tach add performance flavor to the interior.

Kenny Sutter and his friends still do their own work, and during the last refurbishing a new dash cover was installed and the gauge cluster was freshened.

Much like the rest of the car, the interior remains amazingly original for a car that lived through the ’60s as a hot rod Corvette. Stock seats remain; the fire extinguisher dates back to the old race days.

The clock has been replaced by an AutoMeter boost gauge to monitor the blower. That dash plaque above the heater control has been there since 1965. It is a plaque saying American Racing Wheels Custom Made for Kenny Sutter.

This is the cover of the 1967 NHRA Nationals program. Kenny Sutter raced his Corvette at Indy that year, competing in the E/SP class.

We’re not sure if this photo was taken before or after racing at the NHRA Nationals in 1967, but the number 1000 is still on the window from Indy. Even in this configuration the car was still street driven. This car has been registered, street legal every year since 1961.

The faded photo still illustrates this was a very nicely prepared car. A close look shows clean wheelwells filled with Goodyear slicks and even the framerails appear to be neatly painted.

That big Dana rear peeking out from under the car tells you this is a Vette with a past. Big traction bars complete the rear suspension while the vanity tag is a nod to the name on the car when it was raced.

Here’s a closer look at those rare wheels. Open lug nuts are required by most race organizations and the real magnesium wheels are wrapped with Goodyear tires.

The morning sun provides beautiful highlights through the House of Kolor Candy Apple Brandywine paint. The stance is ’60s perfect and those rare magnesium American Racing LeMans wheels have been on the car since 1965.