1958 C1 Corvette with More than a Few Surprises 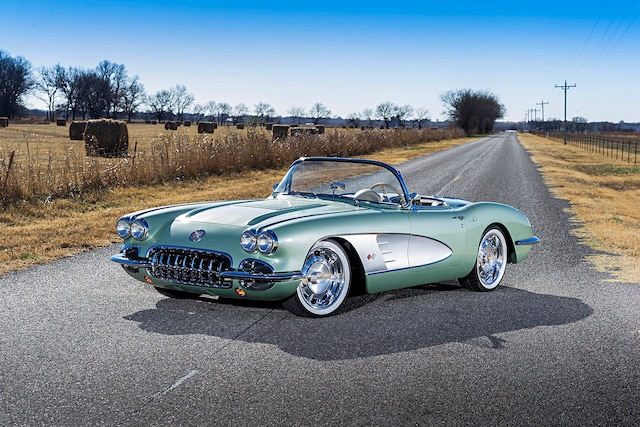 From start to finish, there was no hesitation as to why this Corvette was being built. Certainly no snowball effect took place either—none of that, “I’m just going to paint it and freshen up the engine,” then all of a sudden every inch of the car gets touched. Nope, from day one it was always going to be the massive snowball at the bottom of the hill (a no-expense-spared restomod cruiser).

Owner Howard Chapman must have a good head on his shoulders (or not, depending on who you ask) because when he finally got around to having his dream Corvette built he decided to go all the way right away. “I ran into Heartland Customs through a friend and they have mastered exactly what I wanted,” Chapman told us regarding Heartland’s reputation for custom car building. “So it was a no-brainer who would build my dream car.” His dream car, as it turned out, was a 1958 Corvette. “I have owned C3s and C4s and have always dreamed of owning a ’58,” says Chapman. They settled on an out-the-door price and the rest was history.

Before Chapman knew it, a year had flown by and he was standing outside Heartland Customs’ facility in Purcell, Oklahoma, ready for the big reveal. What he then laid eyes on was everything he’d hoped for and more. “It absolutely blew me away in every sense of the word,” exclaimed Chapman.

At this point you’ve probably seen a picture or two of the finished product, but let us enlighten you as to the details that make up a ’58 Corvette as stunning as this one.

For starters, the car was built on Heartland Customs’ SPECVETTE chassis, which they co-developed a few years back with Roadster Shop. They designed the chassis with ultimate performance and driveability in mind using Penske coilovers and AFCO shocks all around. The frame itself is comprised of laser-cut steel pieces that are welded together, instead of bent tubing, for increased strength and rigidity. The chassis utilizes C6-style spindles that allow for some pretty serious Wilwood disc brakes, 13-inch rotors front and rear.

With a solid foundation to build on, the guys at Heartland Customs shifted their focus to the powertrain. Chapman’s Corvette was never meant to be a track monster, but it’s still nice to know that he’s got that type of power under the hood. To that end, they installed a 430-horsepower, 6.2-liter LS3 crate engine from Chevrolet Performance. No internal modifications were made to the LS to ensure the utmost in reliability, but they did install an aluminum radiator from DeWitts to maintain optimum engine temps. A Spectre air intake and cone filter was attached to the stock GM throttle body to make sure the LS3 would pull in clean air. As for the exhaust, Heartland retained the stock exhaust manifolds but custom-fabricated a stainless system with twin 2 1/2-inch Borla ProXS mufflers. Final touches include chromed accessories done by Custom Chrome Plating in Grafton, Ohio, and body-color-matching fuel rail covers.

Behind the LS3, Heartland Customs bolted on a five-speed TREMEC TKO 600 so that Chapman could enjoy shifting his own gears. The TREMEC sends power to the rear wheels via a Ford 9-inch rearend from Strange Engineering. The centersection houses a limited-slip differential and a 3.50:1 gear.

When it came to the exterior of the C1, it was all about retaining that classic 1958 style. The point wasn’t to build a car that flashed its high-tech underpinnings but to build a Corvette with timeless looks. Really, the only thing that gives anything away is the car’s lower stance and larger-diameter wheels. Speaking of which, the wheels are the EVOD Industries’ 18-inch Hubcap model that closely resembles the hubcaps of a stock ’58 Corvette. Completing the classic-appearing wheel and tire combo are white-walled 245/45R18 Michelin Pilot Super Sports. Other than the rollers, it’s business as usual from the outside of Chapman’s Vette—just some bodywork, chrome and a few coats of PPG Cascade Green paint sprayed at Heartland Customs. Well, not totally business as usual because as some of you might be yelling right now, “Cascade Green wasn’t even offered in 1958!” And you’d be right because it was only offered from the factory in ’56, ’57 and ’60. So yeah, it’s not an original ’58 color but hey, at least it’s not some random Ford color.

OK, moving on. There are a few more details hidden around the exterior of the Vette that you would never know existed. For instance, open up the gas filler door on the driver’s side and instead of a fuel filler cap it’s a CTEK battery charger system. This offers Chapman maintenance-free peace of mind that his Corvette will always have juice in the system, ready to fire up and drive anytime. The LS still needs a way to fill up, so Heartland moved the fuel filler neck to a little hiding spot underneath the driver-side rear taillight. Another neat detail is the sideview mirrors. Besides there being two instead of just one, they are stock-appearing but have hidden turn signals built in for added safety and visibility.

Heartland Customs’ skillfulness in hiding modern conveniences behind classic visuals continues inside the ’58. Exhibit A is the center console, which, at a glance, looks pretty stock but in reality, hides a couple of changes. Instead of the stock clock, there’s a vent that blows ice-cold air conditioning thanks to a Vintage Air system. The radio is a trick unit from Retrosound that gives Chapman Bluetooth control over a Kicker sound system. Even more trick details include manual window cranks that actually operate power windows and light-sensing headlights. In place of the stock dials are custom SPECVETTE gauges and the stock-looking steering wheel has been cut down to 15-inches while a five-speed placard and Hurst shifter in the center console replace their stock counterparts. S&S Buggy Works in Burleson, Texas, handled the upholstery, wrapping the stock seats in champagne leather from Relicate and covering the floors with beige Daytona carpet from Auto Custom Carpets.

Chapman’s decision to go all the way right away on his ’58 yielded some pretty outstanding results. Not only did he get a ready-to-run restomod Corvette at the end, but he got one with some seriously cool details worked into it. There is certainly something to be said for building a car with a singular goal from start to finish. The end result is a Corvette that is put together so cohesively that if you don’t know what you’re looking at you might miss it completely. Vette