The Money Pit: Frank Bendit’s 1970 Nova proves that when it comes to horsepower, cash is king! 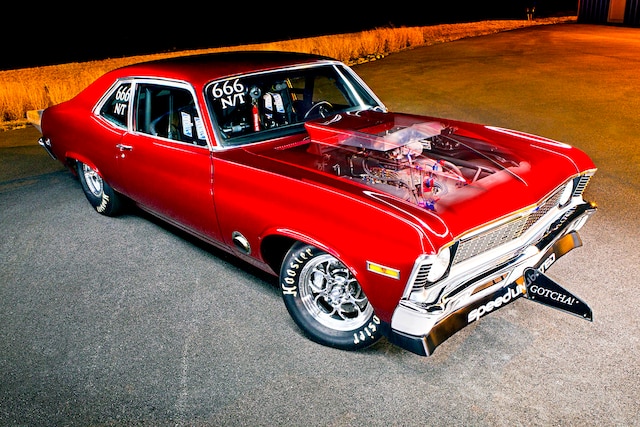 Some afflictions are hard to cure. Those that have been hot rodding cars from an early age know that once you get hooked it can evolve into a chronic, lifelong, and costly ailment. For those that break away and inevitably experience withdrawal symptoms, the cure won’t be found with some magic pill. The only reasonable fix for when the withdrawal becomes unbearable is to jump back in with a new project.

That’s exactly how Marylander Frank Bendit fixed his longing for some Detroit iron. He recalls, “I’ve had many cars over the years. In the early ’70s I had a ’70 Boss 429 Mustang (he wishes he that one back), a ’71 428 Super Cobra Jet Mustang, a ’69 427 Chevelle, and a ZR1 Corvette, along with a few others.” As time passed and the responsibilities of life crept in, the cool cars crept out. Expensive high-end foreign performance luxury cars slowly replaced the Detroit iron once parked in his garage, but the thrill of big horsepower never went away.

In 2011, Frank embarked on a path to wellness by taking the necessary steps to get his mojo back. “I had wanted a big tire car for a while and was looking high and low,” he explains. “Every one that I looked at was either in horrible shape from being run hard at the track or it was an over-the-top chromed show car.” After months of fruitless searches, he asked a number of friends to help him track down a suitable candidate. One of those friends dialed him in with Courtney Lassiter, the owner of Old Town Auto in Prince Frederick, Maryland, as a possible source. This proved to be the right move, and within a short time Courtney had found a car for Frank at an auction.

It was a clean, straight ’70 Nova that was the perfect candidate for what he was looking for. Someone had already started it down the Pro Street path by installing a 383 stroker and giving it a fresh bath of Kandy Apple Red paint, but beyond that, not much else had been done to it. That was actually a blessing because what Frank wanted to build was a legit, street-legal car that could be driven to and from the track and still lay down competitive runs in the quarter-mile. This Nova was the perfect canvas since it was fairly unmolested and would eventually allow him to have it built his way.

He drove the Nova in as-bought form for a few months but the allure of slapping some big skins on the back was too much to resist so he sent it off to Francis Johnson, the owner of Fast by Francis in Mechanicsville, Maryland, for some chassis work, which would kick off the Nova’s muscular transformation. The laundry list of changes was long, so Francis didn’t waste any time cutting it up and back-halving it with 2x3-inch mild steel framerails. They would support the custom-fabricated four-link setup utilizing QA1 double-adjustable shocks and a narrowed FAB9 housing with a Strange Ultra Case stuffed with 4.30:1 Pro Gears and Strange 40-spline axles. At the front he pushed the firewall back 4 inches, but retained the stock subframe, which he dressed up with a pair of QA1 double-adjustable shocks and a set of Belltech 2-inch drop spindles mounted on TRZ Motorsports upper and lower tubular control arms. With the planned horsepower increase, safety was taken into consideration and appropriately addressed with the installation of a 12-point rollcage.

With these changes, the Nova took on a different attitude under the skin, however, the wish for it to be a dual-purpose ride meant that the right choice of wheels and tires would also be important from a visual and performance aspect. Frank was hot for some double-beadlock wheels and Weld almost had the right set. He didn’t like their double-beadlock system so he had Champion Wheels install one of their double-beadlock conversions on the rear wheels. They measure 15x18.5 and are wrapped in Hoosier Quick Time 31x18.50-15LT DOT drag tires. Weld was also chosen for the front rollers. Those measure 15x4.5 and sport 26x4.5-15 Hoosier rubber. Wilwood binders and rotors at all four corners handle stopping this expensive rolling combination.

As the chassis work progressed and the cash kept flowing, the engine was the next item to put a dent on the finances. Frank wanted to start with a fresh mill that fit with his street/strip plans. For that side of the puzzle he leaned on Joe Jilek at Speed Unlimited in Morningside, Maryland, for all the go-fast parts that he was looking for. While Joe was the parts feeder, Terry Samakow at Samakow Racing Engines in Capitol Heights, Maryland, was the assembler. Frank’s steady cash flow gave Terry the foundation for the Nova’s new heart, which started with a 595ci Dart Big M Pro block, a Callies Ultra Billet crank, and a set of GRP connecting rods pushing on 11.5:1 Diamond pistons. The topside menu consisted of a set of Brodix Chevy BB-3 heads, Callies titanium pushrods, Jesel roller lifters, and a Custom Cams custom-grind cam. A Brodix BM2000 intake capped off with a Quick Fuel custom carburetor fed by an Aeromotive Eliminator fuel pump handles fuel distribution, while the laughing gas gets piped in via a Speed Tech three-stage system.

As all of this unfolded, it was clear that delivering big horsepower meant spending some more cash. Frank went to see his old friend Jim Beattie, the owner of ATI Performance Products in Gwynn Oak, Maryland, for a transmission that was up to the task. ATI whipped up a TH400 with a manual reverse valvebody and an ATI 9-inch 4,500-stall converter for him.

With this new combination under the hood Frank knew that temps would also spike up, so he had an aluminum Meziere five-row radiator with a built-in internal water pump installed. When it came to the exhaust system, off-the-shelf wasn’t happening, so Francis fabricated a custom set of headers that dump into 4.5-inch pipes mated to Burns stainless mufflers with fender exits.

Moving to the interior, Frank hired Steve Bell of Bell’s Interiors in Gaithersburg, Maryland, to stitch up an interior that was both comfortable and functional. He started with a set of Kirkey seats wrapped in black vinyl with Stroud Racing five-point harnesses. An iditit tilt column along with a Grant removable racing wheel was also fitted, allowing Frank to slide in and out with ease, while the AutoMeter Pro-Comp liquid-filled gauges keep him informed. Mated to the TH400 is a Precision Performance PowerShift air shifter to run through the gears. Francis was also responsible for the installation of the Safecraft fire protection system.

The last installment on the Nova’s makeover was the exterior. Frank came to another friend for that task. Jeff Edwards, the owner of Quality Auto body in Mechanicsville, Maryland, was his choice to tackle the needed bodywork. Jeff did the finish work on the recessed firewall, while Steve Laguna laid down the paint. Externally, the Kandy Apple Red coat that came on the car was immaculate and Frank was quite content with it, and didn’t want to throw money at it with an unnecessary repaint, so it was left as is. Since the new mill didn’t quite fit under the stock hood, Steve did have to color match and lay down some Kandy Apple Red on a Glasstek 4-inch cowl-induction hood.

All this work came with a hefty price tag and spanned almost five years. The end result is a car that has some street civility, but when needed can lay down the numbers. On the dyno, it has pulled 1,001 hp at 7,900 rpm and 980 lb-ft of torque at 7,500 rpm. When it comes to track times, Frank points out, “Since I grudge race, I like to keep the times to myself.” He also points out that none of this would have been possible without his wife, Mary, and her blessing for the checkbook decimation this car inflicted. She is however, often treated to a ride out to dinner or even some grocery shopping in the Nova. The only downside is conversation isn’t the best because, “it’s so damn loud inside.” A small price to pay we think.