Going Green: Heidts’ entry for this year’s Muscle Car Challenge had lots of bite to back up its bark 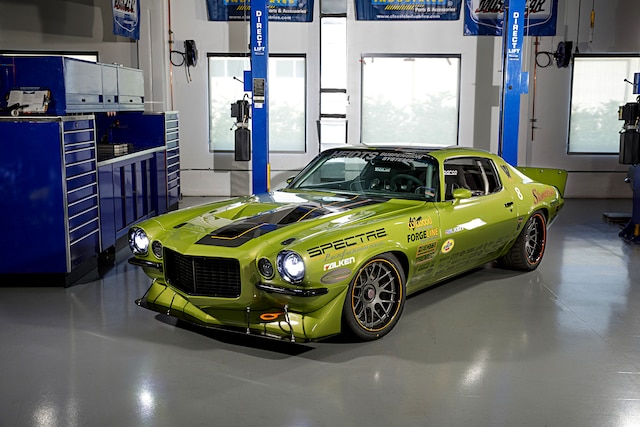 In a world chock-full of Camaros, this one will have other F-body owners green with envy. If not from the stomach churning g-force it’s capable of pulling, then from the radical green paint scheme. Owned and driven by Ken Thwaits, this 1973 Camaro was a staunch competitor at the 2017 Classic Industries Super Chevy Muscle Car Challenge presented by Falken Tires.

Originally built by Randy Johnson of D&Z Customs in Kewaskum, Wisconsin, the Camaro has a long history of competing in the Optima Ultimate Street Car series. Johnson campaigned it there during the inaugural season of the series where it caught Thwaits’ eye. “I was racing a fifth-gen Camaro at Optima, but really liked Randy’s Camaro,” said Thwaits. “[Randy] called me and asked if I wanted to buy it at the end of the season, and we struck up a deal. I told him, ‘If you crash the car, the deal’s off!’ You never saw a guy so nervous when he’s racing,” laughed Thwaits.

Under the hood of the Camaro—affectionately named Envy, due to its vibrant hue–beats a Wegner Motorsports–built LS7 that pumps out an asphalt-melting 680 horsepower. “[The engine] is very powerful,” said Thwaits. “It sounds awesome and the public loves it!” Wiseco 11:1-compression pistons and Callies connecting rods and crankshaft comprise the rotating assembly, while Comp pushrods, roller lifters, and custom-grind cam; FAST LSXR intake; and RHS LS7 heads make up the top end. Connected to the engine is a TREMEC Magnum six-speed transmission and a Centerforce DYAD dual-disc clutch that feeds power through a Dynotech 3.5-inch steel driveshaft to a Heidts Pro-G rearend.

While the Camaro is a looker, and a beast in the horsepower department, under the skin works a functional and track-focused Heidts Pro-G suspension system. Heidts’ approach to suspension design is twofold: make it simple and make it work. “We moved heavily to bolt-in parts to allow the average Joe to get in there and compete,” said Heidts owner Wallace Leyshon. “Guys like Danny Popp and Ken Thwaits have discovered that we make good stuff.”

The fore end of the car is loaded with a Heidts Pro-G front subframe. It’s a bolt-on suspension system that replaces the outdated, GM-issued front clip. While the subframe, control arms, and spindles are all over the counter pieces available from Heidts, the shock setup is a prototype cantilever design that uses control arm–mounted pushrods to articulate the three-way adjustable RideTech coilovers. “We try to make our stuff handle well on the street as well as for Pro Touring drivers, like Ken,” said Todd Westberg of Heidts. “The front end has a splined sway bar, which is for cars that perform at this level, but we also have other sway bars.” “As a driver and tuner, it’s really easy to get to the suspension pieces to make changes and adjustments,” added Thwaits.

At the rear, a Heidts Pro-G IRS replaced the factory live axle in favor of more modern hardware. The 9-inch-style differential housing is completely independent, allowing the rear wheels to move of their own volition and to have camber gain curves—not possible with a solid rearend. This setup keeps the tires more firmly in contact with the pavement as the body rolls and the suspension articulates during cornering. “We really feel the bolt-in IRS is extremely affordable for the value and ease of installation,” said Westberg. “It’s professional grade suspension the average enthusiast can install at home in their garage, with no fabrication or welding needed. The saddles are custom fit right into the framerails.”

Bringing the LS engine’s hefty horses to a slow are a set of Wilwood W6A six-piston calipers and 14-inch GT slotted rotors on the front, and Wilwood DynaPro four-piston calipers and 10.25-inch rotors on the rear—a setup focused on outright domination on the track. On the Heidts Pro-G rear suspension, the rotors are mounted inboard of the control arms, near the pumpkin, helping to reduce unsprung weight on the suspension. This trick makes the car more responsive and nimble.

A car, as with any tool, is only as competent as its wielder, and Thwaits is no slouch in the driver’s seat of his surgical-instrument-grade Camaro. He competed in the Formula Mazda series between 1985 and 1987, and took home the championship in 1985. He then took a break from driving, marrying in 1992, and starting a family—but the fire never died.

“I saw the Optima series covered in Popular Hot Rodding years ago and thought, ‘that looks pretty cool.’” When his son hung up his baseball glove, subsequently did Thwaits his coach’s whistle. That meant there was time to return to the track. He entered a fifth-gen Camaro into the Optima series in 2014 and took home the points championship his first season. He continues to compete till this day and in Novemeber 2017 won the Optima Ultimate Street Car Invitational in his Mitsubishi EVO. He drives Envy at events like the Holley LS Fest in Bowling Green, Kentucky, and a few others to “shake out the moth balls.”

In addition to driving, Thwaits is an avid Camaro collector and enthusiast. “I have 24 Camaros in my collection, Showtime Motorsports, which includes 11 ’69 Camaros (with four of those being the rare JL8 four-wheel disc brake option), and a 1985 IROC third-gen found in a shipping container with under 10 miles on the odometer,” he said. Ken is a genuine Camaro lover; and, as the Muscle Car Challenge proved, an ace behind the wheel.