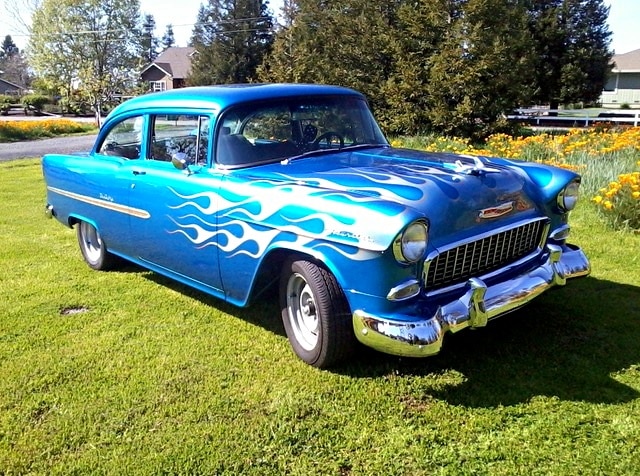 Ron Porcelli has owned his 1955 Chevy since June 1961. Powering Ron’s Tri-Five is a 292ci straight-six with an owner-fabricated port-injection EFI manifold, which is fed 8-10 psi of boost from a ProCharger D-1SC supercharger. The engine is controlled by an ACCEL ECM. The rest of the drivetrain includes a 4L60E transmission and a narrowed Ford 9-inch with 3.89:1 gears with positraction. Ron’s a hands-on gearhead as the only items he subbed out were the wiring, the flames, and the upholstery.

If you are drawn to a truck and it literally has your name painted on the side, it makes sense to buy it. Even if it isn’t for sale. That’s the brief version about how Tom Sinclair came to own this 1957 Chevrolet truck. During the frame-off build, a 350 crate engine backed by a 700-R4 transmission found duty in the drivetrain. Up front is an independent front suspension with disc brakes. For comfort and convenience, Tom added air conditioning, power steering, and a tilt wheel. Tom has over 35,000 trouble-free miles since the build and won the Suede & Chrome award at the 2nd Annual Goodguys-Speedway Motors Day at the Hay.

Chuck Shearin of Concord, North Carolina, is the owner of this stunning 1966 Chevy II SS. We don’t have many details, but what Chuck has told us is that it has the 327 engine and is backed by a legendary Muncie M22 Rock Crusher. Oh, and Chuck wanted to let all the purists out there know he still has the original SS hubcaps so you can unknot your britches. This SS is so nice that it was used in a movie for the Hallmark Channel.

Photos courtesy of the Readers