Gots the biggest back tires in the world! 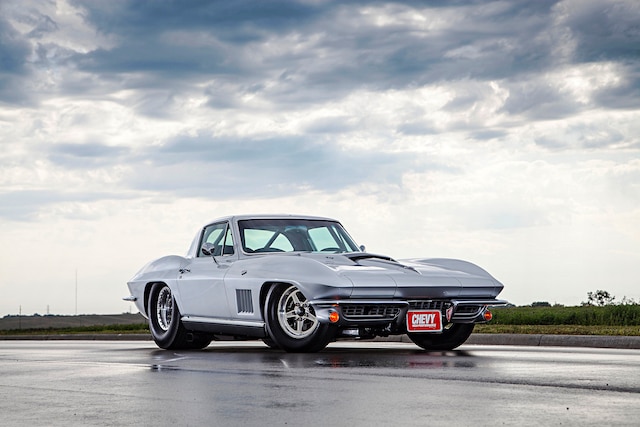 It’s not his fault. Mike Veeder hails from a hard-core Corvette clan that was so much so that he can’t remember any other cars being there besides Corvettes. He says that dad, Ozzie, was his inspiration, his shining light.

Ten years back, Mike was looking for a C2 to infuse with the spirit of Pro Street. A friend found something in Texas, an old Modified Production racer that was in rough shape. Still, he gave $28,000 for a carcass without any interior and some serious pieces missing—no dashboard, no console, no carpet, no seats. It had a huge black hole in the middle of the floor where the shifter used to be.

In the beginning, the project got legs from Ron Dryer who started work on the transmission tunnel straightaway. Mike says that this aspect of the build was the most daunting and that it took the better part of a year to complete the firewall and to resurrect the center console lump. Then Doug’s Auto Repair picked up the package.

The first thing Doug Engels and his guys did was pull the engine out and refined the firewall and the area under the hood. They ducked underneath the new dashboard, wired the system and then got beneath the floor to plumb the lines for the brakes and fuel. With the engine in place and the brakes and lights working, the car began to take shape. Fixing the retractable headlights was handled by Veeder’s Collision, with brother Gary pulling the strings. Veeder’s marched on, cosmetically updating the original ’65 to look like a ’67, the last incarnation of the Midyear series.

Veeder’s guys Robert Solem and Brandon Engebretson got on it. Brandon did the tricky headlight installation; Robert did some of the body work and painted the car Sikkens BMW Silver (which was supplied by Mark Czichotski , the owner of Dakota Bumper and one of Veeder’s vendors).

Nostalgia crept in on silent feet. Rather than being swept along with the LS-engine lemmings, Mike held tradition with a vintage small-block of historic proportions. Out east in Marshall, Minnesota, Matt Steen at Victory Engines pumped up a 406 with a forged rotating assembly, pairing a Bullet crankshaft, Ohio Crankshaft connecting rods, and Speed-Pro pistons. He held the compression ratio to a sleepy 10:1 so the thing could run on cat-pee if ever the need arose. Matt slid the ol’ solid roller bumpstick in place. He covered the bores with Air Flow Research cylinder heads fresh off the five-axis CNC lathe and topped them with a 780-cfm Quick Fuel carburetor that straddles a Bow Tie single-plane intake manifold. Waste products are extracted by large-diameter Hooker primaries that leak into a 4-inch collector. What Steen’s industry produced was 546 horsepower at 6,200 rpm and 509 lb-ft at 5,100 rpm, more than enough dope to make this lightweight scoot like it was scalded with muriatic acid.

In the end, Pro Street is delineated more than anything by monster back wheels, ones big enough to steer the car regardless of driver input, so punching it like it was heading off the front of an aircraft carrier is clearly its mission. No slalom tricks, no balls-to-the-wall braking contests, and no high-speed cornering, although with enough soapy slurry under them, the Corvette might win the burnout contest. Regardless, Mike amended the suspension with SPC Performance adjustable upper control arms and coilovers to support the front of the car and a fabricated four-link between vertical coilovers to harness those beer-barrel hog skins. Because of the unwritten Pro Street 15-inch rule, the speed-burners are minimal disc brakes all the way around.

The quarters in Mike’s dream are subdued, functional, and belie the utter chaos described earlier. It looks new; it looks perfect. The ex-race car already had a tight-fitting chromoly rollcage and no one could think of a reason to change that for the Corvette’s new mission. Look what Doug and Lisa Oelrich at Delmar Upholstery did. They laid down factory-style carpet, put up factory stock door panels and center console, and turned attention to the Procar buckets that they lavished with leather. Despite all the somber black, there are enough pinpoints of red (gauge needles, door safety reflectors, Line-Loc switch, crossed flags on the floor mats, and the logos on the Simpson five-point safety belts) to draw eyes right to them.

Mike hankered for a third pedal underneath his feet because he likes to whack gears when he tries to push the throttle through the floor. “I love taking it out on the weekends and running it through the gears! When I get back, I feel … completely de-stressed. What a great feeling!” Call it his catharsis.

We couldn’t think of a better way out. CHP

Dream Giveaway offers a 1965 coupe and a 2018 Lingenfelter Grand Sport for their latest charity.