From the Archives: Watson’s Wildest 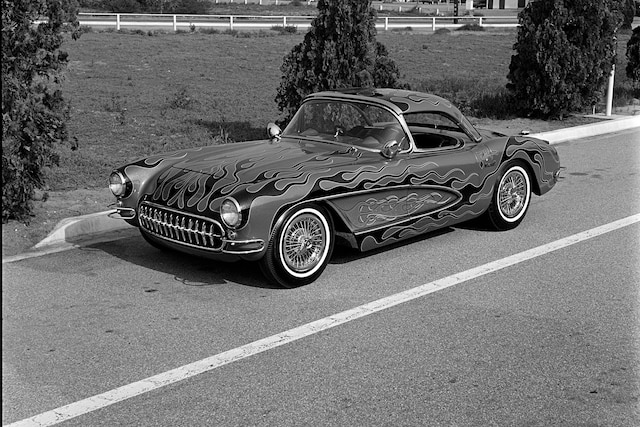 For hot rodders and lovers of custom cars, Larry Watson needs no introduction. Purist Vette owners may not be as familiar with the legendary painter and pinstriper, who was inspired to pick up a brush by watching the work of another pinstriping master, Von Dutch. Watson would go on to pioneer a number of now-iconic custom paint effects, including panel paintjobs and lace painting.

Then again, the purists have likely turned the page anyway.

If you’re still with us, don’t you wish that we had found color photos of Pinky Richards’ 1957 Vette in Watson’s flamed, candy orange metalflake paintjob? We sure do. It must have been spectacular.

But back in 1964, when Rod & Custom magazine featured the car in its May issue, color pages were a precious commodity. So readers had to make do with the varying gray tones in Bud Lang’s black-and-white photography and use their imagination to bring the candy and flames to life.

Those of us in the 21st century are more fortunate. The website Custom Car Chronicle has an in-depth story about Watson laying flames on this very car, including color photos courtesy of the Larry Watson Collection (customcarchronicle.com/cc-builders/larry-watson-c-painter/larry-watson-flames-part-4/). From them we see that the flames were rendered in salt and pepper black metalflake with a bright yellow outline. While the car was coated in a red/orange candy, the coves were painted in green/gold metalflake, a shift that’s dramatic in color but barely registers in the black-and-white photos.

We also learned from the Custom Car Chronicle website that Pinky’s Vette had been mildly customized before going to Watson, with pearl yellow paint and candy green striping. Another master craftsman, Bill Hines, reworked that version of the car before Watson got it, shaving and filling the body to smooth its lines.

Once Watson’s work was complete, Pinky’s Vette was finished off with nerf bars that wrapped around the front and rear fenders, 1960 Mercury taillights, Buick Riviera hubcaps, and a fur and leather interior complete with an ARC record player riding the hump between Pinky and his passenger.

Larry Watson must have been pleased by the finished product, as it was he who lettered “Watson’s Wildest” on the gas filler door. Considering how wild his custom paintwork was in those days, that is quite a statement. Vette