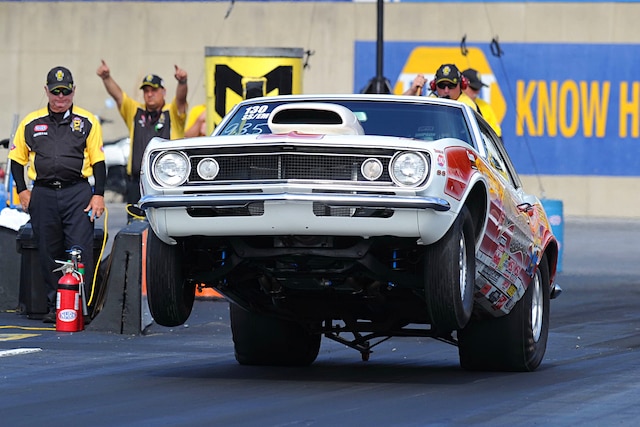 Maryland Traditionalists
Veteran racer George Taylor is giving East Coast drag racing fans a retrospective look back while campaigning his vintage-appearing Super Stock 1967 Camaro. Taylor is the patriarch of a family orientated race team based out of Bel Air, Maryland, which spans three generations, including his son George Taylor Jr. (the driver) and his grandson George Taylor III. George Taylor Sr. is the original owner of this race car, purchased back in 1970 and initially raced in the NHRA Modified Production class. Now the Camaro, which was built by Wisecarver Brothers Race Cars and features its original and period-correct paint scheme, runs a high-winding 800hp, 297ci small-block assembled by Black Arrow Race Engines. The Camaro is now raced in SS/EM trim and George Taylor Jr. has run a best time of 9.16 at 146+ mph. Raymond and Christopher Valentine round out the race team’s crew.

Victorious Vega
Racing a super reliable and very rare 1971 Chevy Vega, Ohio’s Rob Kropfeld is certainly one of the bigger success stories within NHRA’s Central Division 3 circuit. Rob and his girlfriend Christin Wuzelbacher have been racing their car since debuting it late in 2006. In 2010, it received a major upgrade to its current form when a new rollcage and some tinwork were completed by PK Race Cars. This Vega’s engine combination is a small-block 434 built by Ohio Crankshaft and is rated at around 700 hp. Kropfeld’s focus includes Fast ET Bracket and Super Street 10.90 or Super Gas 9.90 target racing, and the success he has amassed is pretty remarkable. Rob has won various Track and King of the Track titles, a lucrative $50K first prize in Ultimate 64 competition, and he is a two-time winner in Jeg’s shootouts. He also prevailed for the 2016 NHRA Division 3 S/ST points title, and he has two NHRA national event wins (Joliet 2015, Norwalk 2017). Kropfeld remains an independent racer but receives valued backing from associates Ohio Crankshaft, Sunoco Race Fuels, and Goodyear tires.

The season championship battle was won by Pennsylvania’s David Barton, who prevailed over his racing stable mate Pete Gasko Jr., in the final points tally (277 to 244). Barton won it racing an extremely potent COPO, which is owned by Gary Wolkwitz and sponsored by GM Parts Now. The Barton and Gasko COPO Camaros feature Mike Roth (MR2) chassis and similar in-house engine programs direct from Ray Barton Racing Engines: 350ci supercharged LSX engines that produce a whopping 1,250 hp. Both the Barton and Gasko cars, which were constructed side by side, were originally 2016 models that were converted to 2017 trim to go with the latest generation Chevrolet-developed engine programs.

Barton won three times on the circuit in 2017, taking the events at Gainesville, Norwalk, and Indianapolis in record-setting fashion while Gasko Jr. scored at the other two, held at Concord, North Carolina, and St. Louis. The formidable team also bantered back and forth throughout the season in the near 170 mph-capable cars for top performance bragging rights while carding the all-time quickest runs ever for the FS/XX category. But at season’s end it was 19-year-old Pete Gasko Jr. who was holding the quickest recognized elapsed time at a remarkable 8.097.

Buoyed by such great season success, NHRA and SAM Tech have confirmed further expansion of the Factory Stock Showdown schedule to seven events in 2018.

Highly modified from bumper to bumper, this big-block 1967 Camaro combines the best parts of Pro Street and Pro Touring into one badass ride.