Knack Daddy: The ace of the silver lining, Emory Johnson surprised even himself this time 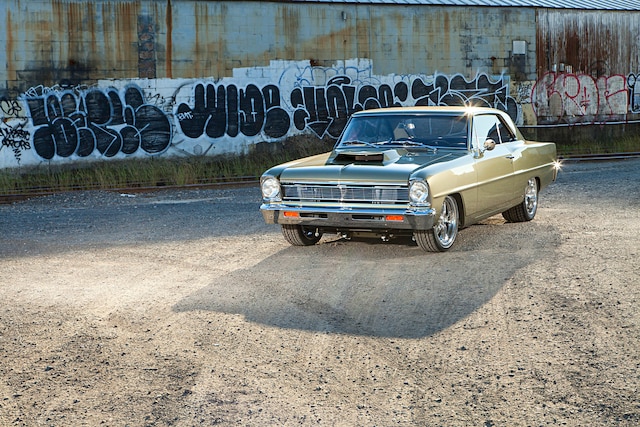 You could call Emory Johnson the master of finding the best in a tough situation. We could go on with a list of reasons but one sums it up perfectly: his Nova.

Emory’s not shy about his modest beginnings. It’s prologue to the story about where he is today. Translated: the guy busts his ass. Part of hard work is a kind of eternal optimism. You don’t bust your ass if you feel like you won’t get anything from it, do you? And Emory busted his ass on this car—even on the deal. He found the 1966 Nova listed for $3,000 at the swaps but ended up getting it for $800. “It was an old drag car,” Emory begins. “It hadn’t been on the road since the late ’70s.” Sure, someone took a torch to the quarter-panels, but that’s an easy fix. Certainly a lot easier than fixing a car that saw constant duty for the 20 or so years that it was off the road.

But it still needed tons of work. He used the savings from trading and bartering where it mattered, like in the form of a 372 built by the appropriately named Larry Fast. “It just pulls and pulls like a big 327,” Emory describes. It’s an engine that would’ve been prohibitively expensive if he weren’t so resourceful. And don’t take resourcefulness as suffering. One of the deals he scored was on a Richmond 4+1 gearbox. And not just any old Richmond, Liberty’s Gears plated the gears to convert from synchros to dog-rings (if you’re not familiar, think of that instantaneous tick-tock gear engagement that motorcycles have). “It came from a sand-drag car so it has a really low First gear,” Emory says. “So it leaves really hard.”

But the biggest fee imposed was time. Doing almost everything himself, the project took about eight years to get back on the road. And this is usually the point where we say everyone lived happily ever after. The end.

It was the end, all right. The rear end up against the wall on a freeway onramp. “I was trying to get a friend pumped up about working on his truck so I let him drive the car,” Emory laments. Eight years of work down the drain after only 400 miles.

That’s enough to ruin anyone on cars. And frankly, we couldn’t hold it against him for not wanting to spend another X amount of years on his back cursing at a bent car. But remember that clever part? “In the meantime, I was able to put a little money away,” Emory says. Between that and insurance, he could for once afford to pay someone else to lay on their back and curse at a bent car for him.

“We’d actually been friends for some time,” says Darrel Schroeder at Schroeder Speed & Customs in Troutdale, Oregon. “It sucked what happened and it really couldn’t have happened to a nicer guy.” He and Emory worked out a plan that would not only fix the car but also fix some issues that bugged Emory about the first build.

They tore the car down to essentially nothing. Ironically, if not even paradoxically, the modifications made to this car are basically invisible. Like you wouldn’t notice the consistent panel gaps. And you probably didn’t notice that they narrowed the bumpers and tucked them closer to the body. But even if invisible, those things make the car look better. And some make the car work better. The airbox that the Schroeder crew fabricated draws from the scoop and the cowl, ensuring the engine the coolest charge possible.

Jason Mortenson applied the Ford Ginger Ale Green. Paul Reichlin at Cedardale Auto Upholstery applied a judicious hand of his hot-rod touch to the interior, reshaping the seat foam and trimming it in black leather.

Sure, Emory was footing the bill to have someone else do his bidding, but it wasn’t a free-for-all. “I had to watch every bit of cost,” Emory admits. It meant keeping things like the Mopar 8 3/4-inch rearend. “I like the story about it,” he says, plotting the car’s time line from race car to now by way of that rear axle. “It says a lot about where this car came from.” It even mounts to the stock monoleaf springs. It has slapper-style traction bars, of course.

Yeah, the guy who we praised for doing so well for himself had someone else do for him for once. But can you blame him? The car is incredible. Even Emory admitted that the Schroeder Speed crew took it to a level that he might not have been able to do, “and certainly not in the time they did it.”

But what made it that way was actually the consequence of an extremely unfortunate event. At the end of the day, Emory Johnson wound up in a place far better than even he expected. The difference here is perspective. Whereas many of us would’ve just soured on the whole deal, Emory found the best in a tough situation. And look at what a difference that made. CHP