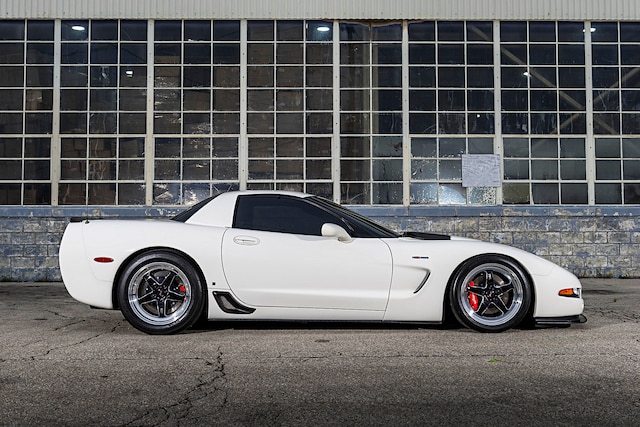 We’ve all been there—there was always that one girl (or guy) in high school you just had to have. You spent every class period staring dreamily down at your notebook, doodling, thinking what life might be like only if? Joey Butel was another classic victim of this teenage phenomenon but with one tiny exception: the “girl” he was dreaming about was the all-new Corvette Z06 that came out while he was a senior in high school. There may have been another girl he longed for whenever his mind wasn’t on the Vette, but that’s a story for another time.

The year was 2000, the C5 Corvette had been out for a few years now and it was really starting to get some attention. But the new model wasn’t so new anymore so Chevrolet needed something to spice things up a bit. In came the 2001 Corvette Z06. This was the first time the Z06 name had been used since its one-time debut in 1963. Back then, Z06 was an option package that included various race-inspired components like a beefed-up stabilizer bar, stiffer shock and springs and better brakes. The most notable feature of the Z06 back then was the larger 36-gallon fuel tank that would allow race cars to run much longer on the track without having to refuel. Only 199 Vettes were ordered with the Z06 option back in 1963 so their rarity and enhanced performance make them some of the most desirable Corvettes ever.

It was no small thing, then, for Chevrolet to bring back the iconic Z06 name and even more so, that they would make a whole new model in honor of that heritage. The 2001 Z06 made a serious statement and was a large step forward from the base car. A new engine was added, the LS6, which produced up to 405 horsepower along with various weight-saving bits like a cutting-edge titanium exhaust and thinner glass. Butel was in high school when the new Z06 came out and, like most of his peers, he would not be dropping the $47,000-plus needed to purchase one at the time. But that didn’t mean he dropped his dream of owning a C5 Z altogether. No, he just had to be patient.

Some years later, in June 2013, he finally made that dream come true by picking up a Speedway White 2001 Corvette Z06 hardtop. It was a one-owner car that was mostly stock “except for a set of hideous wheels and a CB antenna,” according to Butel. With those wheels as a catalyst, he promptly began modifications. One thing led to another until it became what it is today: a 1,000-plus-horsepower supercharged beast.

The car went through a few different stages in Butel’s years with it, but we’ll skip the little mods and go straight for the fun stuff. As it sits now, the dominant feature of his ’01 Vette is the powerplant. As good as the stock LS6 was it couldn’t hang when he first threw some boost at it. The engine let go on the dyno. He pulled it in favor of an LQ9 gen-IV iron block built by Schwanke Engines of Springfield, Minnesota. They bored the stock block to bring the displacement up to 377 cubic inches and threw in some Wiseco pistons and Molnar connecting rods to handle the boost to come. Butel took it from there, bolting on a set of aluminum Air Flow Research 230cc heads that really let the LS breathe when combined with a Tick Performance Blower Stage 2 camshaft. Between the heads went an LS2 intake manifold ported by Peak Performance and a TPIS 90mm throttle body. Finally, a Holley Dominator electric fuel pump feeds the LS fuel through Bosch 127cc injectors.

Now for the boost. A Vortech YSi centrifugal supercharger was chosen for the iron block LS. With a 10 percent overdrive thanks to an ATI crank pulley, the Vortech unit spins up enough to make a whopping 21 psi of boost. Kooks headers with a 3-inch stainless system and Borla Stinger mufflers were given the task of getting all that air out of the engine as efficiently as possible. Another potential issue when adding so much boost is heat. So, to knock down inlet temperatures, a custom ECS air-to-air intercooler was installed while a Ron Davis four-row aluminum radiator was tasked with controlling overall engine temps. Add up A plus B plus C and the result is lots of power. After a good tune by Ryan Mitchell at KC Maxx Performance in Kansas City, Kansas, it put down 1,029 hp at 7,000 rpm and 949 lb-ft of torque at 6,000 rpm to the rear wheels.

With that much power, the stock transmission was never an option—Butel had seen plenty of other C5s shatter their diff on the first pass. To keep history from repeating itself, in went a complete rear subframe from a C6 Z06 put together by RPM Transmissions. They threw in their Level 6 TREMEC TR-6060 six-speed transaxle paired with a 3.42 and Wavetrac limited-slip differential. A McLeod RXT twin-disc clutch within a Quick Time bellhousing connects the LS to the TR-6060 via a custom torque tube from Precision Shaft Technologies.

Suspension-wise, it’s business as usual up front, save for the RideTech Level 2 coilovers that bring the car down 2 inches. Butel also needed some stopping power to counter all that power so he paired Baer Eradispeed two-piece slotted rotors with Wilwood four-piston calipers. In the rear, things got a little more complicated with the addition of that C6 subframe, which lengthened the wheelbase. Not wanting to run little 26-inch tires or cut the wheelwells, Butel had to get creative. His solution came in the form of custom lower control arms built by his buddy Victor Almazon. Like the front, the rear also saw a set of Baer Eradispeed rotors but with the stock calipers instead.

The next hoop to jump through was the wheel and tire combo. In the front he didn’t need to get too tricky, and installed 18x9.5 Weld S71s with 275/35R18 Nitto NT01 tires. In the rear, Butel didn’t want to compromise like others before him and wanted to fit 18x12s under the stock fenders. That meant a lot of hours in his two-car garage working with fiberglass to tub the Vette. But, even with mini-tubs installed, he still couldn’t technically run 18x12 Weld S71s like he wanted. That was until he ran into Mitch Farmer who actually works at Weld and was able to pull some strings and get custom hoops made that would give Butel the offset he needed. Mickey Thompson ET Street S/S tires measuring 305/40R18s were then fitted to give Butel’s Z06 some serious grip.

Visually, the rest of the Corvette was pretty stock other than a subtle front splitter and rear diffuser, but Butel wanted it to stand out next to other similar C5s so he needed something a little more. He had a custom black vinyl decal made for the hood of his Z06, which was inspired by some of the C6.R Corvette race cars.

Inside the Vette it was all about subtle modernization. The stock head unit really gives away the age of a C5 so Butel had Double D Mods install an updated Kenwood touchscreen head unit. Just below that, where the cupholders once were, he had a custom gauge pod mount made to house air/fuel and fuel pressure gauges. Finally, a set of Recaro sport seats and B&M shifter really blend nicely with the rest of the interior while giving it a more quality feel.

At the end of the day, patience was the name of the game for Butel. He waited for over a decade to finally seal the deal on his high school sweetheart then another four years of tweaking and building and tuning. Finally though, he’s at the point where he can start using his C5 Z06 like it was meant to be used with the goal of running 9s in the quarter and competing in some half-mile roll-racing events to see what she’s really capable of. Vette