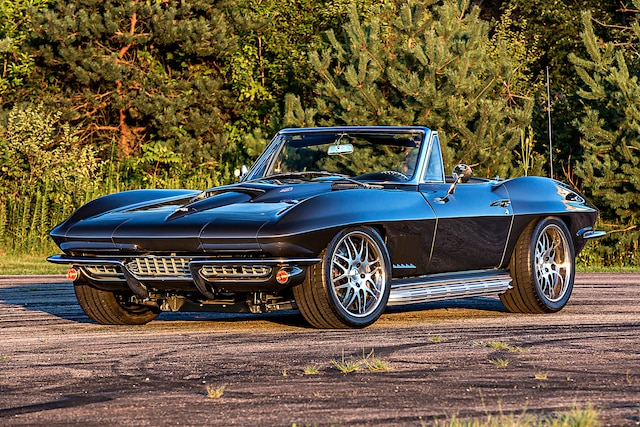 The concept of an old muscle car possessing modern performance and convenience is not a new concept, but the expectation that it will be as reliable as a brand-new car is something most people don’t expect with a custom build. Schwartz Performance have made a name for themselves when it comes to producing top-notch, well-built restomods and that’s precisely why Steve didn’t think twice about where to take his ’67 convertible.

Steve’s love for the C2 Corvette started long ago when he first got a ride in his godfather’s 1963 split-window Vette. “It was a hook, line and sinker into classic cars,” Steve tells us, and it’s been his lifelong dream since then to own a Corvette.

When the time finally came that he was able to pick up a Corvette of his own, he wasn’t going to skimp out and own something mediocre. No, he wanted the best of the best. He wanted to have his dream Corvette built into something capable that he could count on to start up and run as reliably as a brand-new Vette. Previous experience with a Chevelle he recently had Schwartz built told him that was the one place he trusted to have his Corvette built, too.

Steve then found and purchased a plain-Jane ’67 convertible and had it sent over to Schwartz Performance with the intent to take the years 1967 and 2017 and bring them together. Why a convertible? Well, as Steve puts it, “I don’t see any other way to own a Corvette. You hear the car better, smell the car better … life is just better in a convertible.” There was one caveat though—the entire purchase and build of this Vette was to be a secret Steve would keep from his wife, Cindy, because he wanted this to be her car.

As it sat, the ’67 was a nice little 327 small-block–powered Corvette ready for some attention. “You could have done a restoration if you wanted,” recalls Steve, “but it wasn’t anything special.” So it was the perfect candidate for the type of “restoration” the guys at Schwartz had in store. They started by separating the fiberglass body from the stock frame since it would soon be dropped onto a fully built Schwartz Performance G-Machine chassis. The body was then stripped down and prepped for paint, which was the first part of modernization the Vette would see. Rather than leaving the body completely stock, Schwartz added a big-block stinger hood and, most notably, they widened the car 1 1/2-inches in the front and 3 inches in the rear. The color Steve chose was Shark Gray, a factory color option for the 2015-’16 Corvettes. Using PPG paint, they sprayed on three base coats and three clearcoats to give the car the high-quality sheen it deserved.

As mentioned, the Vette would be getting a G-Machine chassis that uses C6 Corvette-style controls arms, RideTech coilovers and Schwartz’s own antisway bars front and rear. Some seriously hefty six-piston Baer Pro-Plus disc brakes with drilled and slotted 14-inch rotors complete the performance-oriented chassis. A staggered set of 18x9 and 18x10 Forgeline wheels with 275/35R18 and 295/35R18 Continental Extreme Contact tires were then chosen to complement the car’s intended handling, ride quality and overall style.

Before the body and chassis would meet, it was time to fit the chosen drivetrain. Steve had Schwartz bolt in a dry-sump LS7 crate engine that would make a reliable 505 horsepower and 475 lb-ft of torque. A set of reproduction side pipes would really accentuate the experience of driving the open-air Vette. Behind the LS went a TREMEC T-56 Magnum that sent power back to a built C4 Corvette independent rearend with a limited-slip differential and cruising friendly 3.08 gears.

With the chassis and drivetrain sorted, on went the freshly painted body. Inside the cabin Steve wanted to keep things looking as original as possible with just a few deviances from stock. They snuck in a few modern conveniences like a Bluetooth-controlled sound system and Vintage Air A/C along with some subtle Dakota Digital gauges. Those with a keen eye will notice the shift pattern placard no longer has four forward speeds indicated but six because of the T-56 below.

The build took Schwartz Performance about a year and a half and was completed just in time for Steve to give Cindy quite the birthday surprise. Now, every time they take the car out to a show Steve gets a little chuckle when people tell him, “You have a nice car!” and he gets to respond with, “It’s my wife’s car,” Then sit back and see their reaction.

Regardless of whose car it technically is, Steve and Cindy get to enjoy a Corvette that covers all the bases in terms of modern tech and reliability while retaining that classic style. They currently plan to put a couple hundred miles on it a year, taking it to local shows and just going for an evening cruise here and there, which is exactly what it was made for. As Steve puts it, “It’s an old car with all the benefits of modern technology. It starts, stops and handles with no headaches.” He continued, saying, “There are certain expectations you have with buying a new 2017 Corvette—it’s the same with this one.” Vette