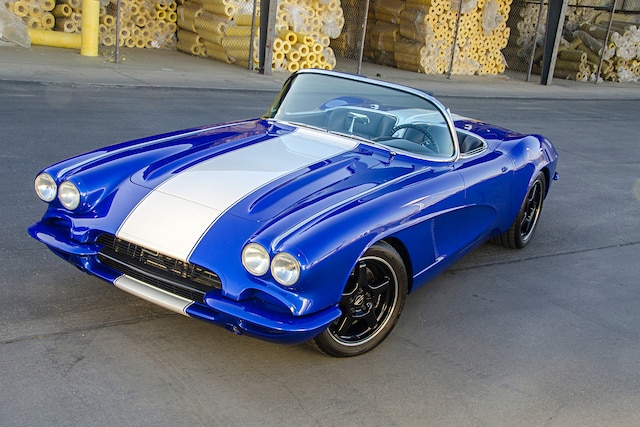 A traditional rhyme advises a bride to wear “something old, something new, something borrowed, something blue.” That advice is fitting for James and Sandy Eudy’s 1962 Corvette, as it marries multiple elements together. But it definitely required some muscular coercion to combine them into a happy union.

The old part is pretty obvious, as the car was well worn when James first came across it. “My search for a 1962 Corvette donor body took several months and ended successfully when we found the perfect piece of ‘junk’ for this project,” James relates.

He enlisted the aid of Joe Calcagno, a Bloomington Gold judge and C1 Corvette Specialist of R.A.R.E (Raintree Automotive Restoration Enterprises) in Soquel, California. Joe had a 1962 body and frame that would never be returned to its original form. It had been left out in the weather for years and was basically a goner. The doors were just hanging off of it, the body had been weirdly customized with square taillights and other oddities and there was significant collision damage from the nose back to the firewall. Not only that, it had no engine, trans or interior, nor any trim pieces. This bride-to-be was definitely in need of a massive makeover. But it would eventually become far more than just another pretty face, as we’ll see.

Not far away from where James found the dilapidated donor was just the right guy to handle the complete transformation, Alf Ebberoth of Sand City, California. Sandy affectionately calls him “a master of disaster.” An apt title, as what he was able to accomplish with this basket case over a four-year period is nothing short of miraculous. Before jumping into the project, however, careful thought and consideration went to the plan.

“We created a ‘theme’ car based totally on the 1996 Corvette Grand Sport,” James explains. The body would remain with Alf to begin many hours of fiberglass restoration and custom design features, and the frame was delivered to Newman Car Creations in Templeton, California, to make substantial changes to the chassis.

While Alf and his crew were busy breathing on the body, Newman scrutinized the frame. Fortunately it had only surface rust, and just needed a thorough cleaning. After sandblasting, the frame was put on Newman’s table and stripped of all the unnecessary brackets. He then cut off the front section of the frame and fabricated a new section from 12-gauge steel. This new section of frame was fitted with a Corvette C4 K-member, precisely locating the front suspension. A fresh core support mount was installed as well.

Next, Newman welded motor-mount pads to the frame, placing a freshly minted LT4 383 stroker right where the original 327 lived. This mill, backed by a ZF six-speed trans, came from Street and Performance in Mena, Arkansas, and was delivered to Jack Freese in Monterey to overhaul the engine and to step up the horsepower from 350 to 425 horses.

While the intake manifold and fuel system are factory, the air filter assembly was custom-built by Performance Automotive and uses a K&N filter. The exhaust manifolds are OE LT4, ceramic-metallic coated without shields. MSD supplied a Pro-Billet distributor for a Gen II V-8, the plug wires are MSD Super Conductors and the spark plugs are Denso Iridium Power IT20s. The engine controls, wiring harness and engine computer were all lifted from a 1995 Camaro, supplied by Howell Engine Developments, which also handled the calibration.

At the rear of the frame, the ZF six-speed was bolted into the front of the X-member for test fitting. This step included checking out the C-brackets, bumpstop brackets, sway bar mounts and the side “dog bone” mounts. All of the laser-cut, custom-welded items were carefully spec’d out on Newman’s jig table to ensure a high degree of accuracy. Once all the welding and finish grinding was complete, the frame was sent to Performance Automotive in Seaside, California, for a shiny black finish.

While the frame was being painted, Gary Wallace was busy rough polishing all the 1996 Grand Sport aluminum C4 suspension components making them ready for the special mix silver powdercoat/clearcoat finish.

The slick black frame then returned to Newman for suspension assembly. All the rubber suspension bushings were replaced with Energy Suspension urethane units, and a modified Corvette 2.5-turn steering rack was installed. In addition, an adjustable ride height front composite spring was added, along with custom-valved Bilstein shocks.

The new 1996 calipers were mated with Baer Brakes EradiSpeed rotors for great looking, tight clenching binders. A special heavy-duty Dana 44 was assembled at Tom’s Differential in South Gate, California, using a 3.73 ring-and-pinion. It was then secured with a Newman torque arm and hooked up to carbon-fiber axleshafts, in order to withstand the enhanced engine output. Planting the power on the pavement are BFGoodrich Comp TA tires (255/45R17 front, and 315/35R17 rear) mounted on the 17x8.5 and 17x11 black 1996 Grand Sport wheels.

Getting back to the thematic body, here’s where “something borrowed, something blue” came onto the scene. Alf handcrafted wider quarter-panels that flow with the lines of the car. To do so, he laid fiberglass over urethane board glued to the original quarter-panels and then cut them off to make molds. The 3-inch wider quarter-panels not only cover the wider suspension of the 1996 C4 rearend, but also the 13-inch-wide tires. The fit and finish of the panels is so smooth and integrated they look better than factory-original pieces.

Front and rear composite bumpers were handmade from molds off the original bumpers. Since these were custom rear bumpers, they blended the fit right into the enlarged quarter-panels.

The Corvette insignias at the front and rear were removed and smoothed over. Electric windows were installed and an electronic pushbutton trunk release was installed.

Initially, James planned to use late-model Corvette door handles, but they looked too big. Then at a stoplight, Alf spotted some small, recessed units on a Miata, and had an “aha” moment. These Miata door handles preserve the smooth lines of the body, eliminating any bulky chrome hardware.

Brightwork played almost no part in the design at all. Jerry Smith, of Performance Automotive, fit a carbon-fiber insert into the grille, again, to eliminate chrome. He was also responsible for the one-off, low-profile console, which he designed specifically for this car.

“This was my wife’s idea,” James says. “She did not like looking over the hump.” The original gauge cluster was removed and a new mold made to accommodate the new VDO custom gauges. This design eliminated the raised area on the driver-side and gave the console a sleeker style blending in with the rest of the car. The steering wheel is a Budnik Flat-Track unit that has thick, padded leather over a billet aluminum core.

There was only one person to consider for the interior and that was Sid Chavers Upholstery in Santa Clara, California. “Sid was responsible for the incredible interior in my ’57 Nomad, which has won numerous awards,” James relates. “I had no doubt that he would, once again, rise to the challenge.”

Custom-formed seats, covered in black leather with just the right amount of stitching detail gave the interior a treatment consistent with the body and engine. He even upholstered under the hood, with leather, diamond-pattern liner, reminiscent of a Maserati. This piece also keeps the noise from the engine to a restrained roar.

Sid was able to use all the trunk space as originally designed and continued with the diamond pattern cover on the inside of the trunk. Dark grey, German square weave carpet was used in the cargo area and floorboards. No attention to detail was left undone.

Brad Smith of Performance Automotive spent countless hours block sanding and perfecting the exterior of the body in preparation for painting. Jose Ramirez of Antique Auto Restoration in Seaside, California, was responsible for the incredible paintjob, using Admiral Blue and a white stripe seen on the 1996 Grand Sport model.

This car demands to be driven. The imagination and attention to detail which Alf pours into each car he builds and the proven Newman Car Creations chassis and drivetrain combination ensured that the driving experience far out performs the old 1996 Grand Sport. So sometimes a forced marriage turns out to have a happily ever after. Vette