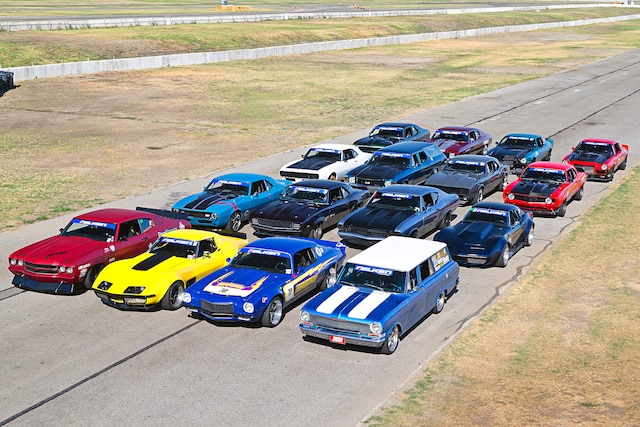 If you've been a consumer of Super Chevy content then you're pretty aware that we're big on the idea of driving your car, preferably hard. Yep, while we love checking out a nicely done Chevy what really gets us fired up is seeing those cars in motion. Given this, we decided years ago to host an event and we knew it needed to involve driving our favorite Chevys in a more than aggressive manner! The Super Chevy Muscle Car Challenge Presented by Falken Tires went off pretty smoothly in the warm and sunny Californian sunshine. Like the last few years our event was held at the Auto Club Speedway in Fontana, CA.

Our rules also stayed the same from last year. All the cars had to run the sticky Falken RT-615K+ 200-treadwear performance tires and the cars had to be licensed and insured for street use. As for drivers we didn't care who you brought to the party, but the same driver had to pilot the car through all three events. This was all about having fun with our cars, and too many rules becomes a drag.

The challenge consisted of three driving events; road course, slalom, and 100-yard dash. The road course portion took place at Auto Club Speedways' infield course where each car will was given 5 chances to nail down their best time. The slalom was a zig-zag run through a 420-foot gauntlet of cones, It's harder than it sounds and is more about maintaining a consistent speed than accelerating through each cones. The 100-Yard Dash is set up to test a tires forward bite and how well the car launches from a stop. Think of it as a short "street style" drag sprint. Each car launched from a dead stop (just asphalt, no VHT) and blasted 100 yards through a set of timing lights. Between these three tests, the cars, and the Falken tires, were pushed hard in terms of forward and lateral performance.

The cars were divided in half with the first group going to the road course while the second group tackled the slalom and 100 Yard Dash events. At lunch they swapped. At the end of the day points were awarded based on standings for each event (20 points for first, 18 points for second, 17 for third, etc). So, in theory there was a max of 60 points up for grabs.

The winner, Eric Sheely in his Ridetech-sponsored 1972 Corvette nabbed first place in the both the slalom and road course events, and he capped it with a second place finish in the 100-Yard Dash for a total of 58 points. He picked up bragging rights and a sweet trophy from the guys at Wiseco. Second this year was grabbed by Best Of Show's Matt Alcala in his Art Morrison equipped 1969 Camaro who finished second on the road course, third in the 100-yard dash, and third in the slalom. That's a solid performance in all three events which landed him in a solid 2nd place with 52 points. Third place was taken by TCI in their 1964 wait for it wagon! Yep, the wagon piloted by Sal Solorzano killed the 100 Yard Dash with a first place finish and locked down 6trh place in both the slalom and road course for a total of 48 points. 4th went to the Mary Pozzi piloted Speedway Motors 70 Camaro while the 5th spot was nabbed by Robb McIntosh in the DSE equipped 1969 Camaro entry.

The cars at our event were very diverse. We had everything from $100,000 builds to low-buck builds and 800+ hp to 350 hp engine outputs. We had cars with tons of track time mixed in with fresh builds. Given this, comparing the cars to each other really makes little sense. So, to give you a way to gauge the cars we compared them all to a baseline car. Our baseline car this year, an LT1-powered, ProCharger equipped, 2017 Camaro SS owned by Tim Lee of Don Lee Auto in Rancho Cucamonga, ended up finishing around mid-pack in terms of overall points. Now the SS, with all the 21st century bells and whistles is no slouch on the track, so we were impressed that any vintage Chevy iron could come close, let alone best it, in performance.

Overall the day went well, there were few "off track excursions" and more than a few cones suffered on the slalom course, but aside from a few engine and parts hiccups everyone had fun wringing out their modified Chevys. And that was the whole point of the exercise. Our Chassisworks equipped long-term project 1968 Camao, Track Rat, even made it to the party, barely, after its marathon 11-year build. With zero miles on the odometer it made it through all three events with only a few gremlins showing up to cause headaches. Not the best way to break in a new build, but it sure was fun!

So, if you have a Chevy at home, safely stored away in the garage, get it out and drive it! We don't care if it's at an autocross, road course, drag strip, or a cruise through the countryside, just drive it! You will end up thanking us for the advice.

We will have all the juicy details, including times for all the cars, in an upcoming story, but for now we thought you might like to check our 18 very cool Chevys getting put through their paces.

» Read More
Everything You Need to Know About NASCAR Ahead of the Daytona 500 » Read More
Pro Street 1968 Camaro Rocks England with 2,400 Horsepower