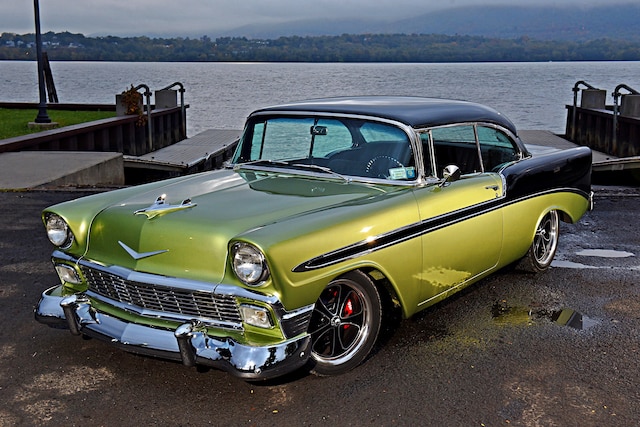 John Clark fell in love with Tri-Five Chevys in a bizarre way. Young John was on his way home from school one day when he had a life altering experience of sorts. First he heard the sirens and then the screeching of rubber on the blacktop. Finally he caught an eyeful of what the commotion was about. It turns out it was a badass bright-yellow 1955 Chevy trying to outrun the local cops. To the youngster that was the coolest thing he had ever witnessed in his eight years of life.

From that moment on John was hooked. Soon he would be on the fast track to being a true Bowtie connoisseur. But first he needed a ride to call his own. He funded his first Chevrolet by way of his paper route, buying a ’55 two-door sedan at the age of 14. Thirty-nine years later and he still owns that ride, but it doesn’t look or act much the way it did when he first brought it home. Now fully caged with a tilt nose and an aluminum headed 427 stuffed between the rails, the Chevy is one tough performer out on the strip and the street.

After owning that ’55 for almost four decades, John decided he needed another Tri-Five in his stable of cool rides. This time around he figured he would build a ’56 as he always liked the more refined look of that one-year design. And since that model gets the least attention of the Tri-Fives, he figured it would be a good one to build up into his dream ride. The only thing left was to source a good starting point for his project.

Luckily for John, a good friend had a decent ’56 shell that was there for the taking. After 25 years of ownership, the buddy figured he would never get to it, so he handed the title over to John. He was more than happy to take the stripped body off his friend’s hands and give this ’56 the attention it deserved. So then he drew up a plan; a strategy to build this ride into a Tri-Five to be reckoned with.

First things first. Even though the carcass was pretty solid as far as 60-year-old East Coast cars go, John decided to mediablast the body and correct a few issues. There was very little rust on the body panels but he decided to replace them anyway. He added a new floor, trunk floor, and firewall, which brought the ’56 to near OEM standards. Next, the newly repaired shell was sent over to C&M Autobody in Middletown, New York, where the Chevy would have its final bodywork done. Once its flanks were straightened to perfection, C&M laid down the Scion Electric Wasabi Green paint, and accented the hue with Mercedes-Benz Black. The two colors worked well with each other and helped make John’s ride stand out from the typical Tri-Five builds seen over the years.

Next, the chassis was broken down, mediablasted, and refinished. John then selected a few choice parts that would ultimately give this Tri-Five the ride quality he was after. Tubular upper and lower control arms and Heidts 2-inch drop spindles were installed up front, while Super Slider 3-inch drop rear leaf springs were placed out back. These mods gave this particular Bowtie the stance and ride John craved. To get this hot rod pointed in the right direction, a CPP close-ratio power steering gearbox was sourced and added to this muscle ride’s menu.

To get this Chevy to come to a halt, a CPP big-brake kit was installed. It’s a four-wheel disc system with drilled and slotted rotors: 13-inch up front and 12-inch in the rear. The system’s four-piston calipers are fed by a Wilwood master cylinder. Out on the corners, John chose to adorn his ride with American Racing Ridler wheels: 17x7 up front and 20x9.5 out back. They are shod in Nexen N3000 tires: 215/45ZR17 and 255/35ZR20, respectively.

For motivation, John started with a four-bolt main 400ci block, cleaned up with at 0.030-inch overbore, which punched it out to a 406. The bores were filled with 10.5:1 pistons and hooked to an OEM GM forged crank. Dart aluminum heads and a Victor intake were added up top and a Comp flat tappet Magnum cam gets the valves jumpin’. A Quick Fuel 750-cfm carb helps feeds this beast the octane it needs. All this splendid power is topped with a killer March Performance air cleaner. It’s kept cool with a PRC polished crossflow radiator and condenser module with a pair of SPAL electric fans.

An MSD billet distributor and ignition handles the start and spark. Patriot Clipster ceramic-coated headers send the spent gasses out to a fully polished Pypes exhaust with electric dumps. This ’56 is shifted with a Turbo 400 with a manual shift valvebody and a 3,500-stall converter. A TCI outlaw shifter gets it through the gears and a beefed up ’56 rear housing with 3.55 Richmond gears gets the power to the pavement out back.

The interior in this stunning Tri-Five is nothing short of stellar. Keith from Amity Upholstery in Newburgh, New York, handled the duties on the ’56. They first built a custom console and a set of door panels and finished it all off in soft-black leather using all real hides. A pair of Procar by Scat seats was sourced for the build and covered in that same leather fabric. A Flaming River stainless column was added next, along with a Vintage Air unit for climate control. As far as the dash goes, John had a plan. “I love the stock dashboards in these cars so to help modernize the look we covered it in leather,” states the owner. To finish it all off, the interior received Clayton Machine Works handles and cranks, and plenty of carbon-fiber accents all around.

All of John’s hard work paid off in spades when he and his father, Jack, (a lifelong hot rodder himself at 77 years young) debuted the ’56 at the Right Coast Nationals in Syracuse, New York. This Chevy was chosen and singled out in a field of almost 8,500 show cars. It won a Top 100 Award and received a Designers Dozen Award nomination from Creative Rod and Kustom out of Pennsylvania. Today, John is enjoying the fruits of his labor, running this swift Chevy out on the streets where it belongs. Who knows, maybe a drive-by in this ’56 will inspire another young gun to join in, get involved, and make the hot rod hobby part of his or her life.